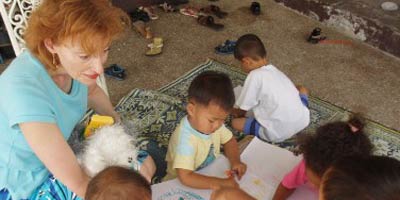 I thought I’d seen it all. I’d traveled to nearly 40 countries as a journalist writing about human rights and religious rights abuses.

But one Saturday in Mumbai, India, I saw something that changed me forever.

It was spring of 2001 and I was doing a story about women and forced prostitution. My contact was driving me through the red-light district early on a Saturday evening. Already the streets were packed and every doorway had at least 2 or 3 women standing in it. The hopelessness and despair on their faces was bad enough and made me weep inside…but it was about to get worse.

“Do you see those cages in the second-floor windows?” my contact asked me. “Cages? What are they for?” I replied, certain I did not want to know.

Girls as young as 4 are smuggled and held in cages

“They hold little girls who are smuggled in from Nepal.” My stomach turned as he told me about the fate of these girls, who are as young as 4 years old. They’re smuggled across the border and brought to Mumbai where they’re held in cages for a month.

Their captors urinate on them, abuse them, torture them, and rape them—until they no longer have a will to rebel. Only then are they fit to enter Mumbai’s enormous child sex slave industry—because their traffickers can sell them knowing they will not run away.

That was the day that changed my life.

Mumbai does not have a monopoly on child trafficking, of course. It happens all over the world, in developing and developed countries, including throughout Europe, the United States, and Canada. No city is immune from this horror.

Each year 1 million children enter the dark world of child slavery; that’s in addition to the children already enslaved.

Most kids get sold into slavery because they believe the lies that traffickers tell. They really think they’ll be models or waitresses, and their parents trust the “aunties” who show up in the villages offering to give their daughters an education in the big city.

The sad truth is that these girls end up in the multi-billion sex trade—the 2nd-highest grossing illegal industry on the planet.

What if we could reach these girls before the traffickers do?

What if we could warn parents ahead of time about the lies that traffickers tell?

What if we could educate teenage girls and give them enough confidence and self-esteem to stand up to traffickers? We would make a massive dent in the trafficking pipeline and prevent hundreds of thousands of children from ever being sold for sex or labor.