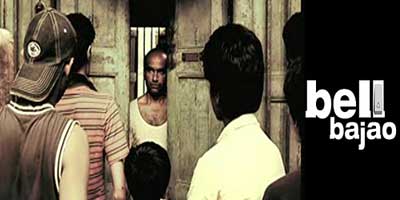 The traditional notion in India is that domestic violence happens in slums.

Domestic violence activists are working to break that myth.

In an interview with OneWorld, Sunita Menon and Bindu Madhavi of global human rights organisation, Breakthrough, discuss their Bell Bajao Campaign against domestic violence and the idea behind involving men as protagonists to fight violence against women.

OneWorld: Breakthrough’s Bell Bajao campaign addresses domestic violence that happens behind closed doors. How did this campaign originate and has involving men been a deliberate move?

Bindu-MadhaviBindu: We use art and culture with media to spread the message. Now why men? There are actually three things. First, we take all the learning from our previous campaigns to the next. Second, we do a regress review of the data. Third, we do a primary research.

In the base study we did before Bell Bajao, we saw that men were actually the ones taking action mainly because they occupy the outer space and have a lot of decision-making power. So we wanted to portray them as positive role models; we wanted other people to join them. That was the whole idea of using men as protagonists.

If you see our ads, we have used men of different age groups to show that everyone can actually contribute. We don’t want to say that men are the perpetrators all the time; they are some men who are making a difference.

Eventually, the violence prevalence should come down. That is our overall goal and that is evaluated through a number of studies. When people keep coming back to us to volunteer for the issue, we see it as success. We are working in two states – Uttar Pradesh and Karnataka, in seven districts each in a much focused way. But if there are other districts who are calling us for training and all, we will go there too.

OW: According to a 2009 study by the Research Triangle Institute, working women in India face more domestic violence. Does Bell Bajao aim to tackle this development?

Sunita MenonSunita: The traditional notion is that the domestic violence happens in slums.

But we tried to break the myth that it is not contained within a certain class or community. We have done a lot of mass media campaigns where we have looked at the elite section, the middle class, in different communities and backgrounds.

OW: On the basis of experiences in the field, does Breakthrough plan to lobby for changes or improvements within the Protection of Women from Domestic Violence Act?

Sunita MenonSunita: Yes, Breakthrough has been very strongly lobbying for the better implementation and improvement of the Protection of Women from Domestic Violence Act in both UP and Karnataka. In both states we held state level advocacy meetings to identify possible improvements within the PWDVA and came up with a list of recommendations and suggestions.

"We wanted to portray men as positive role models; we wanted other people to join them. That was the whole idea of using men as protagonists in Bell Bajao campaign"

We presented these recommendations at a national level meeting. Besides this list, it was important to talk about them and the campaign with people. When we started a few years back, only 3% of people knew about PWDVA. After our work at ground level, there was rise in awareness by 15-16%.

We did a series of campaigns on Bell Bajao. We did dissemination campaigns through theatre, rallies and community mobilisation. The other set of things we have done is to partner with most of the government organisations and we have been promoting the government’s service sites. So, whether it is the protection officer or service provider (NGOs), all have said that they have recorded 14% increase in reporting of violence against women cases post our campaign.

We don’t have a regular funded programme in Jammu and Kashmir but we go there very often to conduct campaigns and create awareness. Keeping in view the suggestions from UP and Karnataka and our own experience, we did a policy document and shared it with the Home Minister P Chidambaram and J&K Chief Minister Omar Abdullah at that point of time. It’s still in its draft phase.

Some of the recommendations are greater awareness of protection officers, service providers, magistrates, police; better linkage between all service providers because we have seen that women were lost in the system because of the communication gap; and fixed allocated budget for the programme.

We wanted the government to create awareness around the Act through various forms of mass communication; we wanted a monitoring and evaluation system so that they could actually see the number of cases that have been followed or not and see that women get justice.

We also recommended PWDVA be free of cost and justice be delivered in 60 days. We were also part of the Planning Commission and tried to push forward PWDVA as a highlight.

OW: You work a lot with multimedia and social media tools to change public attitudes. Can you give some examples?

Bindu MadhaviBindu: Youth is always our target and most youth use internet. You may say that internet is still making penetration in the urban, mini metros but our idea was to educate the educated masses as much as the illiterate ones. Our research says that across socio-economic classes, from upper to lower castes, violence against women is everywhere.

Since we had started this campaign in 2008 and then in 2009, we have been working full-fledged with social networking tools like facebook, twitter. Blogging is a very futuristic tool; you can echo your view points, stories and opinions. Even if people are not very savvy with the English language, they can write in Hindi or broken English and we receive many such e-mails. So, it’s an optimistic glimpse into the fact that internet is penetrating smaller towns too.

We are also trying to tie up with global leaders who believe in this issue and can help us take it up at a global level. In that context we approached Ban Ki-Moon, the Clinton initiative and many others. We want to involve key leaders into the campaign and doing so online helps us to achieve that goal as it doesn’t have boundaries.

Breakthrough is a global human rights organization that uses the power of media, pop culture, and community mobilization to inspire people to take bold action for dignity, equality, and justice. We empower individuals and communities to stand for universal human rights by using multimedia tools that transform hearts and minds.  Based in India and the United States, Breakthrough addresses critical global issues including violence against women, sexuality and HIV/AIDS, and immigrant rights and racial justice.

Sunita Menon is the Education Director and Bindu Madhavi is the Monitoring and Evaluation Manager of Breakthrough.