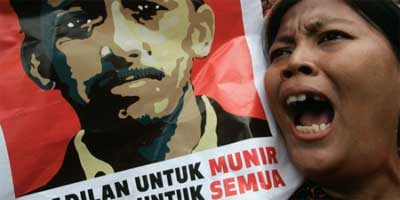 Seven years ago, Suciwati Munir, Angkhana Neelapaijit and Padma Perera were ordinary women, housewives living in different corners of Asia. Then their husbands were snatched from their lives.

The three women are still searching for answers about what happened to their husbands but they have also received hundreds  of column inches in newspapers,  numerous human rights awards, and respect from both fans and foes alike for their efforts to get the issues of extra-judicial killings, enforced disappearances and torture in the limelight. 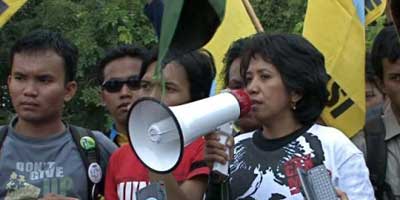 Now, through the eyes and ears of Josefina Bergsten, a first-time director and a woman herself, these remarkable women share their stories of corruption, human rights abuse, state impunity and political intrigue in UNJUST, a 77-minute documentary.

“What made these three cases stand out was how determined the widows were to fight for justice despite the great danger to them,” Bergsten, who spent around four years following the women, told TrustLaw.

“The incredible courage all of the women showed despite frequent threats to them and their families is what struck me the most,” she added.

“Most people would be too scared to pursue and openly challenge the authorities who were responsible for the murder of their husbands.”

The film was released in September 2010 and has won awards including a Special Jury Award at the "Movies That Matter Film Festival" in The Hague but has yet to find a buyer.

The film opened with Suciwati Munir, wife of Indonesian human rights campaigner Munir Thalib who passed away under mysterious circumstances while on a flight to Amsterdam in September 2004. It turned out he died from arsenic poisoning in a case that implicated state-owned carrier Garuda and Indonesia’s powerful military and intelligence agency.

Angkhana Neelapaijit, meanwhile, has yet to see the body of her husband, Muslim human rights lawyer Somchai Neelapaijit who had been investigating and reporting on widespread police torture of Muslims in the country’s volatile Deep South before he disappeared, in March 2004.

He was kidnapped in Bangkok allegedly by police officers in a case that critics say raise questions of state impunity due to police obstruction and sloppy investigation work.

For the Pereras in Sri Lanka, it was not until Padama’s husband Gerard was tortured after being mistaken for a murderer that they came under the authorities’ scrutiny. After suffering extensive injuries and losing consciousness for 19 days, they pressed charges against the police and did not budge despite attempts to bribe them to withdraw the case.

A week before he was to give his evidence at witness at the trial, Gerard was shot while travelling on the bus.

“The women had spent most of their lives as housewives and mothers when they started their fight for justice and had very little experience in public campaigning,” said Bergsten, “so it was very striking how efficient and powerfully they managed to get their message out.”

Instead of the State protecting the weak, all three faced – and are still facing – mainly obstacles and intimidation from the powers-that-be in their quest for truth and justice.

Their pursuit of accountability has led them to meet powerful figures head-on and they have been repeatedly threatened for their stance.

Perera had never been to the police or court before her husband’s case. Instead of defending the innocent, police stations are “torture chambers,” she said. The criminal case against her husband’s torturers is still ongoing and it is not known when it will be wrapped up.

The suspects roam freely while Perera lives with her parents, fearful for her family’s life.

Neelapaijit, now a prominent campaigner for women’s rights and winner of numerous awards, said "Friends told me I would end up with nothing" when she decided not to let the matter drop. Thai courts have acquitted the suspects for her husband’s kidnapping but she is vowing to fight on.

Fight is not over

Suciwati’s fight is also far from over. The Courts have flipped-flopped over Pollycarpus Priyanto, an off-duty pilot accused of killing Munir, who many are convinced is more of a foot-soldier than the mastermind.

The Supreme Court overturned the original guilty verdict in 2006 – Suciwati said she hadn’t lost just her husband “but justice itself” – but in 2008 overturned it again, sentencing Priyanto to 20 years. However, a former intelligence chief accused of involvement was acquitted.

Human rights defenders, instead of being protected, are seen as enemy of the state in Indonesia, Suciwati said.

Impunity has never been eliminated, she said, "That's why I'm still here."

READ MORE ABOUT THIS STORY

Suspect in activist murder to be charged in Indonesia

Anniversary of Gerald Perera’s murder: The ASP who was never prosecuted