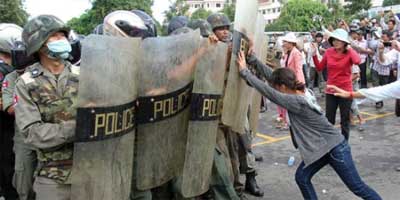 Riot police scuffle with residents of Boeung Kak lake during a protest in front of the City Hall in Phnom Penh November 28, 2011. Thousands of families living near the lake are facing eviction to make way for a Chinese development project. Photo: REUTERS | Samrang Pring

Nget Chhon, 71, was surprised, but not afraid, when anti-riot police punched her in the eye and beat her over the head during a protest against forced land evictions.

“We believed that if the women go to protest instead of the men the police wouldn't hit us,” Nget said. “But they do. I don't care about myself anymore – even if I die tomorrow it is OK, because my spirit will still watch and protect all of our houses with the other women.”

Nget was among some two-dozen protestors – nearly all of them women – who staged a demonstration in mid-April to defend their homes in the once heavily populated neighborhood surrounding Boeung Kak lake.

Less than 1,000 families are left in the Boeung Kak area. Those who remain live amid the rubble left behind by the approximate 3,000 families the Cambodian government has evicted over the past several years. In 2007 the government leased the 133-hectare lake to local developer Shukaku Inc., in a USD $79 million, 99-year deal.

For the past year, Boeung Kak residents have responded to the decision with anger and determination, protesting regularly in sometimes-violent demonstrations. But a potential window for reconciliation opened on Dec. 9, 2011 when the Phnom Penh government handed out the first land titles to some 254 families.

Cambodia Prime Minister Hun Sen last August issued a sub-decree that will provide on-site land relocation – but not housing – to the majority of lakeside residents, drawing positive reaction from community members and the World Bank. The international financial institution halted funding for proposed country projects, valued at approximately USD $128 million, at the end of 2010 because of the government’s handling of the ongoing land conflict.

But the deal, which gives residents 12.44 hectares and Shukaku 114.41, excludes 49 families living directly on the lake, including Nget. And residents reportedly remain concerned that some 540 families who also were granted land titles in the deal have not yet obtained them.

Forced evictions, also known as land-grabbing, are commonplace across Cambodia, which, from the Khmer Rouge years in the mid-1970s until a decade after the regime's collapse in 1989, considered all land state-owned. A comprehensive land ownership law went into effect in 2001, but land conflicts like Boeung Kak continue to erupt.

“Cambodia has good judges and lawyers, but the court system is controlled by the prime minister. You can't get court cases on this heard,” said Sao Sotheary, the program manager for the non-profit organization Bridges Across Borders' Community Empowerment and Legal Advice department.

“There's no other option but to protest.”

The people of Boeung Kak, many of them educated and middle class, are among the most well-organized of those at risk for land grabbing. Women constitute roughly 90 percent of the residents on the frontlines of the everyday battle that has intensified over the past nine months.

“The women just rose to the top of this struggle,” said David Pred, Executive Director of Bridges Across Borders, which helps educate female community leaders about housing law and effective means of protest. “They are completely undeterred by police violence, by whatever tactic the authorities are trying to use against them.” 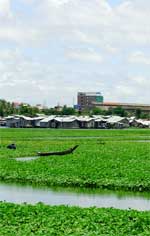 The 41-year-old mother of three has protested outside city government buildings nearly once a week since November 2010, when she received an eviction notice. It was around that time when her neighbor Kun Cha Tha quit her job selling rice to devote  her time to protesting.

“If we try to focus on our jobs they can come and destroy our houses,” said Kun, speaking through a translator. “Men are afraid to protect their houses like this because many are government civil servants and police officers and they could lose their jobs.”

Kun, who has lived in her lakeside home since 1988, recalls her neighborhood as once peaceful and popular with tourists who frequented budget guesthouses. Remnants of that life still linger on littered, dusty streets and within the hollow foundations of leveled houses. The once scenic lake is now home to a bulging sand dune and construction vehicles, signs of the ongoing project to fill in nearly all of the lake and make room for high-end condos and hotels.

The project has resulted in flooding, as well as residents dying by drowning and electrocution, said Pred.

Some of the 3,000 families already displaced from Boeung Kak accepted the government's pay-out offer of $8,500 USD per house, a price that is about $70,000 short of an average home's actual worth in this area.

The Boeung Kak protestors lobbied for provision of a ground level 4- meter-by-16-meter house for every family in the area. The eventual compromise, the provision of private land titles, will not include constructed houses.

Lakeside residents who were included in the deal remain concerned that their titles could be lifted if the government wants to lease more land in the future, according to Bridges Across Borders. Securing enough funding to construct new houses will be challenging for many residents.

Kun, also excluded from the deal, says there is nowhere else she can or will go.

“I live here. I have rights and I am working with the women here so we won't have to move. I will keep on fighting here,” she said.

More on this story