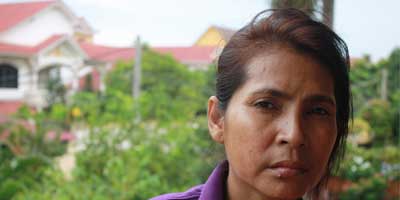 Prach Vothy, a single mother of two living with HIV, is struggling to make ends meet. Food for herself and her family is often little more than a bowl of boiled water lilies – one of the cheapest items in the local market.

“It’s very difficult. We barely get by,” said the 41-year-old, who was diagnosed with HIV more than 10 years ago.

She earns just US$65 a month as a domestic worker in the Cambodian capital, Phnom Penh, almost half of which goes on rent, with little left for health, education, clothing and other needs.

“My biggest fear is if the children get sick… I simply can’t afford it,” she said.

According to a 25 August report by the Cambodian National AIDS Authority and the UN, highlighting the economic and social challenges faced by HIV-affected households in Cambodia, her story is not unusual.

Most of the more than 75,000 HIV-positive Cambodians face similar challenges, as do the more than 60,000 households directly affected by the virus.

“Most of the people living with HIV in Cambodia are poor,” Sreyluch Leap, a programme officer for the Cambodian People Living with HIV/AIDS Network (CPN+) told IRIN/PlusNews. “Sadly, such stories are common.”

What is new, however, is a much better understanding of the profound impact of HIV/AIDS.

“The study highlights the extreme vulnerability of HIV-affected households to economic shock,” UN Resident Coordinator Douglas Broderick said at the launch of the report.

Based on data collected via a national survey of more than 4,000 households (2,623 HIV-affected and 1,549 non-affected), the study examined individual and household-level impacts of HIV, as well as impacts on population and macroeconomic growth.

The report found HIV-affected households experienced lower income, combined with increased medical expenses, which meant they turned to poverty-inducing coping mechanisms, including the depletion of savings and assets and higher levels of debt, with negative impacts on food security and psychosocial wellbeing, as well as on the status of women and education of children.

“Widowed by their husbands who infected them, women face the toughest time in recovering,” Tia Phalla, vice-chairman of the National AIDS Authority, said. “And this undermines the whole family structure.”

In addition, people living with HIV had less income, with 27 percent of respondents reporting having lost their job (or other source of income) since being diagnosed with HIV.

For those able to keep their jobs, income levels were 47 percent lower than before diagnosis.

Moreover, 65 percent of HIV-affected households had at least one loan, compared with 53 percent of non-affected households, with that debt less likely for constructive reasons, such as improving their dwelling or investing in agricultural production, the main source of livelihood for the country’s 14 million population.

“Such findings underscore the importance of scaling up HIV-sensitive social protection programmes and ensuring poverty-reduction interventions reach the poorest and most vulnerable members of society,” Broderick added.

The report did not just examine the virus's effect on individuals and their families but also on macroeconomic performance.

In addition to fuelling poverty, straining health resources and eroding family and community structures, cutting deep into the labour force, HIV is also taking its toll on GDP, the report noted.

“There is no denying the impact HIV can have on Cambodia’s very future and economy,” Tia Phalla said. The virus disproportionately strikes young adults and those in their most productive years.

But the country’s antiretroviral (ARV) programme has successfully averted more than 20,000 deaths between 2003 and 2009 and reduced GDP losses by $100 million annually over the same period.

“This proves the cost-effectiveness of universal treatment coverage,” Tia Phalla said. Before Cambodia began public ARV provision in 2003, coverage was less than 8 percent, but increased to 92 percent of those eligible for treatment in 2010 and is expected to reach 95 percent coverage by 2015, the report said.