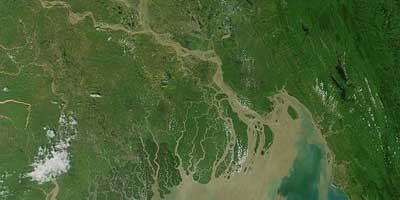 Mosammet Monwara walks more than three km every alternate day to fetch water for her family of five in a heavy earthen pitcher.

She is accompanied on this grind by several other women from the Sharmongolia village of north-western Rajshahi district, just to collect water for drinking.

For more than a decade now Monwara, 37, and her neighbours have been fetching drinking water from distant locations as the tubewells they use have gone dry.

"We ration drinking water at home; bathe once a week and do very little kitchen cleaning to save water," Monwara told a crowded audience at the press club in the national capital at a ‘climate tribunal’ hearing late October.

Several women from other regions of Bangladesh affected by climate change also narrated their experiences at the hearings organised by the Bangladesh Unnayan Parishad, a non-governmental organisation (NGO), the People’s Forum on the Millennium Development Goals and the Global Call for Action Against Poverty.

Rubina Akhtar, 25, from Char Mornia village of Gangachara of Rangpur district, said: "I lost my home on the banks of the Teesta river four times over the last five years due to erosion. Last monsoon when we were just settling down on a new location, far away from the river embankment, flash floods washed everything away, including our fishing boat."

"Now we live in the open near a cattle farm," said the mother of four. "We eat when someone is generous."

Rubina’s husband used to be a fisherman, earning roughly Bangladeshi taka 400 (about five dollars) a week, but the loss of his boat and family’s belongings have forced him to resort to begging.

Dipali Mandal, 42, from village Jatindranagar of southern Satkhira district, lying close to the Sunderbans, the world’s largest mangrove forest, said: "My husband used to be a successful farmer growing seasonal crops. We were a happy family earning about 385 to 514 dollars per season (of four months). But high salinity has rendered us penniless."

"Farmers like my husband can no longer use agricultural land due to high salinity. It was never like this before. In fact, during the winter season farmers grew vegetables for supply to big cities like Dhaka, Khulna and Rajshahi and made extra money."

Bobita Begum, 26, from Hatgacha village of north-western Sirajganj district, said: "I suffered losses of our homesteads 11 times in my life. It started when I was with my parents. After marriage when I moved out with my husband, I thought we would find some relief from river erosion."

"I lost my son last year during sudden river erosions that started at night," said Bobita in anguish. "There is no escape."

Boxed in by extended drought in the north-western regions and frequent floods and river bank erosion elsewhere, deltaic Bangladesh is reaching a point where its land area cannot no longer support its 135 million people. Already, it has a high population density of 1,100 people per sq km.

Projections by the The United Nations Inter-governmental Panel on Climate Change say that 17 percent of Bangladesh could go under seawater by 2050 with millions of people forced to migrate away from the coastal zone.

Already regions like Barind thousands of kilometres of land, that once were fruit orchards and bore different kinds of crops, lie barren.

"There was a time when businessmen from Dhaka would pay us in advance for rice production. We used to supply tonnes of good quality rice to many cities," said Kwaza Nizamuddin, a climate refugee who moved to the capital 15 years ago to find alternate work.

Recent studies by Bangladesh Agriculture Development Corporation reveal that some 400,000 irrigation water pumps, mostly in the north-western regions, have run dry as the groundwater table continues to fall.

Intense river erosions and flooding, extended drought, incessant rainfall and extremities in salinity have forced millions to migrate for better life. Farmers and fishermen are the worst hit.

Most of the 200 rivers which meander across the country have suffered massive siltation, forming huge tracts of barren land. People who build homes, mostly from bamboo, suffer loss of properties when floods hit the silted lands which were once riverbeds.

"It’s time for us to act. We waited far too long. The victims need protection, jobs, support ... many vital issues are being ignored," Abdul Awal, an environment activist and co-organiser of the hearings, told IPS.

Kholiquzzaman, who was chief guest at the Dhaka climate tribunal, said Bangladesh already has an action plan for reducing vulnerability to climate change and natural disasters, but there was a need for international intervention.

"The government has allocated 90 million dollars per year for the next three years to address global warming effects in Bangladesh. It shows political commitment and the government’s seriousness."

The jury, consisting of a former chief justice, eminent human rights activists and NGO volunteers, called for the creation of an international court to provide justice to climate change victims.