Women's Shelters under Threat in Afghanistan 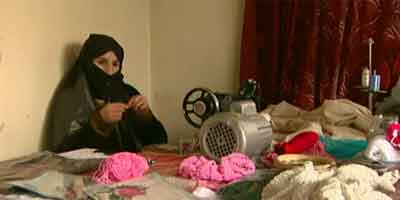 It’s been a year since she ran away from a forced marriage to an older man she says treated her like a slave.

Other girls here in this safe house share a similar fate but they are frowned upon by many in Afghan society where running away is considered shameful.

Rhina, like other victims of abuse says she didn’t have any other choice.

Rhina said, “In Afghan culture, women are not allowed to speak.  I had to do whatever my husband wanted.  I was like a prisoner.  I didn’t want to marry him.”

Violence against women, forced marriages, they continue to be endemic problems in Afghanistan.  Rhina has now found shelter.  She’s living in this safe house, one of fourteen across Afghanistan.

Now the Afghan government plans to put shelters like this one under it’s supervision, as opposed to international non-governmental organisations.

The aim, the Ministry says, is to prevent violations, but it’s a scary thought for these girls, who worry their families could force them to return home.

According to Human Rights Watch, the governments draft legislation contains provisions that can force women to leave the shelter if their family accepts them back or upon marriage.

The Government denies this and says it is not only ready to fund the shelters which will be now known as “Protection Centres” but intends to stop all violations.

"Why are human rights groups only concerned about these women and not about others?  We will ensure that women will only return to their homes when they want to and when they feel safe. There have been reports of immoral behaviour in shelters," says Dr Husn Banu Ghazanfar.

While the Minister said she had no evidence, others say it is time for the government to take over.

Dr Husn Banu Ghazanfar continues, “In Afghan culture it is shameful for girls to run away.  This is an Islamist country, not a Western one.  Immoral things are happening in shelters.  Prostitution, drug use, illegitimate relationships” says .

The girls and women here deny that.  The government says the move is about taking the lead.  Others say it is a fight to limit womens autonomy, but, ultimately for these girls, it is a fight for survival.

The Afghan government has announced it is to take over the running of women's shelters despite concerns from human-rights groups that such a move could put lives at risk.

The safe houses are run by foreign and Afghan charities to protect women from domestic violence, but some conservatives and religious leaders accuse them of being fronts for prostitution or set up to remove women from their families.

The proposal, which requires approval by Hamid Karzai, the Afghan president, and his Council of Ministers to become law, would place all shelters under the control of the Ministry of Women's Affairs...

Medical examinations would be carried out monthly, and women would be ejected if their families say they will take them back or for marriage, the guidelines said, without clarifying if this included abusive families they had fled or forced marriages they were trying to avoid.

Women suspected or accused for so-called moral crimes such as adultery or running away from home would not be admitted to shelters - according to the guidelines.

"It puts the safety of women in shelters into question," Humi Safi of Women for Afghan Women, an Afghan rights group, said.

US-based Human Rights Watch (HRW) group says the move could endanger lives by paving the way for the possible expulsion of women as well as compulsory forensic examinations for those staying in the shelters...

"A government shelter is far more likely to cave in to pressure from families and tribes to hand back the victims, which will put women's lives at risk."

Women's shelters were first opened in Afghanistan following the 2001 US-led invasion which overthrew the Taliban, which banned girls from going to school.

Almost a decade since its overthrow, the UN said in a 56-page report last year that child marriage and "honour" killings remained widespread and the authorities were failing to enforce laws to protect women and girls.

HRW said some of the 14 shelters currently working in Afghanistan faced closure because the government lacks the capacity to run them.

"It could be devastating," Reid said of the regulation.

While the constitution guarantees women's rights in Afghanistan, the deeply conservative country has a poor women's rights record and a nine-year uprising has fostered a fear of a return to Taliban rule.

Our partners in Afghanistan have informed us that details are not finalized and a number of outstanding questions remain. **PLEASE CONTINUE to call on the Afghan government to withdraw the proposed Bill and on donor countries to listen to the concerns Afghan women’s rights activists.** THANKS TO YOUR EFFORTS almost 750 people have taken action so far!