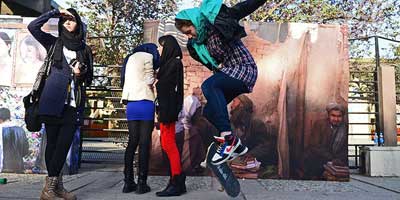 One of the most amazing schools in Afghanistan is a co-ed skateboarding school.

If you have never heard of Skateistan - it is an organization (movement, really) which empowers youth and develops leadership qualities while teaching life skills. 40% of  their participants are girls.

It was recently named one of the world's top 100 NGO's. 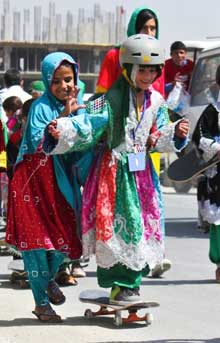 Skateistan was established in 2007 by Oliver Percovich and is based in Kabul.

The land was donated by the Afghan National Olympic Committee and the skatepark and center facility was completed in 2009.

It offers, training and teaching for boys and girls from 5 years to 18 years of age and also provides schooling and extra academic support.

The staff is compromised by locals and a few international trainers.

The facility is open 6 days a week.

It is an indoor facility to also provide older girls with the chance to continue skating in private.

Skateistan has been very positive and respectful in understanding specific needs of children. This awareness and dynamism has helped to foster a solid program with continued success.

All tribes and ethinicities of children are welcome: Pashtun, Hazara, Uzbek and Tajik.

The participants are provided with skateboards and equipment. Skateistan does a lot of fundraising in order to support the athletes.

Children are also provided with photography classes and there are programs for differently-abled kids and streetkids as well. 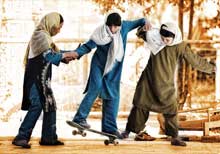 The program relies on funding and garners private donations to keep it working and moving towards self-sustainability.

It has volunteers in over 10 countries around the world for marketing, promotion and fundraising.

This is an incredibly successful program that has inspired and empowered many children in Afghanistan- amid political instability, civil unrest and drone attacks.

Efforts such as this, seek to include and expand the horizons of young Afghan boys and girls.

Any initiative that affords girls the same respect and opportunity as boys, should be lauded and fully supported.

"Using skateboarding as a hook for engaging Afghan youth and breaking down social barriers, Skateistan aims to empower girls and boys from all ethnicities, abilities and social classes. Furthermore, once they come to Skateistan there is also the opportunity in classroom lessons to provide education, skills and platforms for self-expression" - Skateistan.

To read more about Skateistan, purchase "Skateistan: The Tale of Skateboarding in Afghanistan".