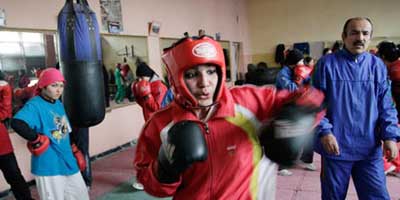 Sadaf Rahimi one of the three Afghan boxers refused entry to the UK. Photo: Musadeq Sadeq/AP

'We are very sorry to be sending this email to update you that the three boxers on their way to the UK for Saturday's event 'Fighting for Freedom Afghanistan v UK' (Saturday 9 March - 2:30pm) have been refused entry visas and will thus not be here for the bout with UK rivals on Saturday. This is event is now cancelled.

On the eve of International Women's Day, we are thinking of our inspiring sisters in Afghanistan and around the world..."

The UK Border Agency in Delhi have, for the second time, refused entry visas into the UK for Sadaf Rahem, Fahima Mohammad, Shabnam Rahman. The three boxers were on their way to the UK to train and fight as guests of the foundation Women in Sport to mark International Women’s Day on March 8th.

On the eve of International Women’s Day, the decision has been lambasted as ‘utterly ridiculous’ and ‘at odds with the ideals of the Olympic legacy’.

Last night the UK Border Agency in Delhi reconsidered visas (which had been supported by the FCO in Kabul, prompting the girls to make the first stage of their trip to the UK) plus all requests of letters and identification, including a letter of support from the Centre of Peace and Unity - their long term supporters in Afghanistan. The girls were expected to be arriving in the UK by tomorrow morning, however Rahem, Mohammad and Rahman are now on their way back to Kabul.

Margaret Pope, founder of Women in Sport, which raised funds to for the women’s visit to the UK said, “I am extremely disappointed. We are made to believe that avenues, especially here in the UK, are opening up to people such as Sadaf Rahem, Fahima Mohammad and Shabnam Rahman, who are trying to pursue their sporting dreams. There has been much talk of the legacy of the Olympics and rights for women in sport, but today, it is not the case for these women.”

Despite it being made clear to officials that the purpose of the visit to the UK was sport and that the women who are all students had financial support from Women In Sport for the duration of their trip, they were refused entry based on being unable to illustrate their financial circumstances in Afghanistan and concerns from the High Commission that they may not return to Afghanistan after their visit to the UK.

Melanie Brown, a former aid worker who has made a documentary about the young women said, “I know how many challenges they have had to overcome in pursuit of their sport. They have continued boxing in the face of these, reaching excellence and representing their country internationally. However, in the face of bureaucracy they are powerless. This visa refusal will come as a bitter disappointment to them. They may as well have a big tick box saying are you from Afghanistan? Don't bother.”

Debbie Mills met the three women whilst working as a security consultant protecting diplomats in the Middle East and is part of the team responsible for the UK visit. She said “The whole point of of visit was to train the girls and their coach, not just in boxing qualifications but also key life skills such as first aid so that they could return to Afghanistan more qualified and equipped to train other women and encourage development which potentially would lead to financial independence. By refusing the visas they are preventing them from prospering.”

Britain’s first licensed female boxer Jane Couch was due to train with the women during their UK visit. She said, “It is absolutely unbelievable. They are just trying to make a change.”

Women in Sport Foundation would like to thank all who have been involved so far. Margaret Pope said: “This is just the beginning for these Afghan women boxers and we remain committed to bringing them here to the UK this year, fighting for freedom.”