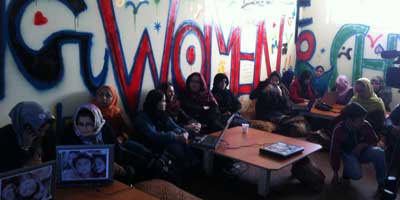 By Anita Haidary, Co-founder of Young Women for Change (YWC)

Anita Haidary, YWC Co-founderSahar Gul is a name synonymous to empowered woman. She has been recognized as a tortured girl. Everyone saw her and felt sorry for her; no one saw the powerful woman inside her who still has hope in life and wants to live again. When we are scared, hurt, and tired of outside world, we spend time at home to heal the wounds given by outside world. Her wounds were given by her family. It is far from imagination what happens when a 13 year-old girl lost her last option of help, her family. It was her self- reliance that took her to this stage and gave her hope. It was her hope for life that kept her alive. She stood still and fought for her life; she rejected prostitution proposed by her husband and in-laws, knowing she had no way where to go back to.

Young Women for Change (YWC) decided to name Afghanistan's first all-women Internet cafe “SAHAR GUL:” it is named after her to remind every woman coming to internet café to remember how powerful a woman can be. Women like Sahar Gul are symbol of power and hope. Her name will be a reminder for all Afghan women to remember that no matter what, they have the right to stand up and start their lives all over again. They have the right to live - even if all doors are closed to their faces.

I remember the first time I heard about her in news, it took me a while to processes the news. It was really hard for me to understand a husband forcing his wife to prostitution. I was shocked and could not believe it; for me to understand and believe what really happened, I started talking about it to my parents with a shaking voice. The next day, Noorjahan, Nasima, Shahr Banu – YWC members and I went to see Sahar Gul. We were all not allowed to see her, the doctor allowed only two people. There was no hope in us; we still didn’t let it appear on our faces, but we knew it was not going to be easy. Though, all of us couldn’t see her we got a chance to talk to the relative who was there as her family. We sat there listening to him, telling us what happened to her. I was heartbroken by what happened to her and annoyed by seeing what went on the process in the hospital. Even though another wonderful organization, Women for Afghan Women, provided for the hospitalization and treatment of Sahar Gul, in the few times that we visited Sahar Gul, we tried to give her hope and love. After seeing everything, I and YWC believe she deserves to be called symbol of women power. Especially, after so much that she had to go through in such a young age.

We put a lot of thought in choosing the name for our internet café, and we suggested all Afghan women’s names that made history in Afghanistan. They are important and a source of energy, but she is a live example of powerful women in our generation. Her existence sends the message that one shouldn’t live just under any condition or give up because you can’t see any other option. There is always hope and options - we only need to fight and hold on to ourselves. The name Sahar Gul sends a message that every woman is strong enough to fight the battles in her life to survive.

Every time a woman comes to our internet café and sees the name, she will remember the power. They will always remember the fact that women are not only about what others describe them to be. Women are powerful; one doesn’t have to do great things, but just fighting for your right makes you brave and powerful enough. If all of us have the power to at least fight for ourselves, no one will dare to tell us that we are not capable.