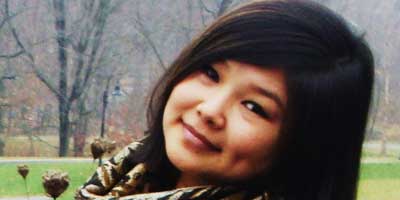 Anita Haidary, like other young Afghans, has experienced more in her 19 years than many of us do in a lifetime.

Anita Haidary was born in Kabul in August 1992 - four months after the creation of the Islamic State of Afghanistan, following the fall of the Soviet-backed Najibullah government.

At that time, Afghanistan had an interim government and the whole country was in a state of unsettled transition, with attrocities being committed by different factions.

In 1994, the Taliban took power in several provinces in southern and central Afghanistan.

Notoriously, in regions under Taliban control, they imposed their political and judicial interpretation of Islam - forbidding women to work outside the home, attend school, or to leave their homes unless accompanied by a male relative.

While trying to gain further control, the Taliban committed systematic massacres against civilians, according to an extensive UN report.

When Anita was six years old, in 1998, her father - like many in the region - had to flee the country overnight. A month later, Anita followed with her mother and siblings, to start a new life in Pakistan.

In 2001, following the 9/11 attrocities, the U.S. and British air forces began bombing al-Qaeda and Taliban targets inside Afghanistan. Meanwhile, NATO, the European Union, Canada and India played a major role in the reconstruction of the country.

In 2003, her family felt it was safe to return to Afghanistan. Anita and her sisters and brother had to again adapt to new schools and a change in culture and language.

Some of Anita's higher schooling took place in California, as part of the Future Leader Exchange Program (FLEX) and Youth Exchange and Study (YES) Program. She then returned to Afghanistan to finish high school in Kabul.

Anita went on to set up Young Women for Change (YWC) - together with Noorjahan Akbar -  a movement of young Afghan women and men advocating against sexual discrimination and inequality.

Chris Crowstaff asked Anita about her school life in Afghanistan, Pakistan and the USA.

1)  What do you remember of your early childhood in Kabul?

I remember very few things about that period of my life.

My dad was running a family business. My mother was at home all the time. My grandfather homeschooled us so that we could learn how to read and write in Dari. My grandmother’s house was my favorite place to visit.

The best part of lunch times were going to my youngest uncle’s shop. He had a shop that rented music and film copies. His shop was situated very close to our house and I would take lunch to him once in a while; I just liked the loud music from his shop that covered the entire street.

I remember my neighbor’s girls going to school. My father loves flowers so we had a lot of them in our yard. The neighbor daughters would come and ask my dad if they could pick some flowers for teacher’s day.

But one day all of this was gone.

We woke up in the morning and my father was not there. I asked my mom and she said he had to go, but he will come back. Some people came to our door asking for my father and my mother told them he is not here.

I remember my mother took us to my grandmother's house so that their neighbor could take care of us.

When we were in my grandma's house I hated it because there was no one in there. The whole place was empty. After some days all my neighbors disappeared.

My paternal grandmother who was living in Pakistan came to Kabul. They started selling things from my parents' house. I remember her staying awake the whole night and packing little things for us.

She was the only one responsible for taking all of us to pass the border to Pakistan, all by herself - all five of her children and my mom - and no knowledge of the language in a strange country.  I remember her running up and down after us and the little belongings we were carrying.

After some days we went to Pakistan.

When we got to Pakistan, both my parents started working.

We were sent to tutoring to learn Urdu and English.

After six months of classes I and my second oldest sister we were admitted to a private secondary school that was partially paid by Aga Khan Education Services (AKES) and rest was paid by my parents.

My two other sisters and my brother were admitted to kindergarten at the same school and expenses were paid by both my parents. The school gave us tests and they admitted me to the third grade. So, I started school from third grade.

We soon had a had simple life again - but very different.

Slowly we became accustomed to the life in Pakistan. In the area where we living there were only a few Afghan families, living far apart. Their children were older than us.

We would barely see any Afghans around.

We were so young that we could not help my parents. My mother and father would cook and, in the morning, help all of us get ready for school.

We spent the whole day out of the house and came home late in the evening. The routine was basically school - to torturing classes - home for dinner - to religious classes - regular prayer - and then we walked back to my house with my mother.

This was our regular life for all whole time that we were there.

3)   What sort of challenges did you encounter when you returned to Afghanistan after the fall of the Taliban regime?

After spending 5 years in Pakistan, returning to Afghanistan I saw many differences. Our entire house was broken; nothing was the way I remembered.

Because of spending less time with our parents in Pakistan, we lost most of the language.

When I was back to Afghanistan and we were admitted to schools. I was in 7th grade. There were 40 students in my new school, compared to the school in Pakistan where there were 5 students.

I had to wear a scarf and longer clothes. I wasn’t allowed to talk in the class.

As I grew older I started facing more problems.

I couldn't live the way I wanted to. I couldn’t be the same person anymore.

I kept fighting for it, but it almost seemed impossible. I didn’t have that perfect world anymore.

I could feel the difference. Things were better than what I had heard, but still the society needed to go through a lot of changes.

I got in a lot of trouble for fighting for freedom of speech in class, correcting teachers, speaking out against imposing religious ideas from my teachers and fighting for my grades.

I was tired of hearing my teachers saying because you are a girl; you can’t do this and that.

There was a time where I was lost; it was hard to accept all my teachers emphasising one thing and the way I grew up.

4)  Do you feel that life in Afghanistan has changed in any way over the years since your return?

Yes, I do see a lot of changes. However when I was younger, I didn’t know much about wider part of the society so I wouldn’t judge, but it is different.

We hear news about suicide attacks.

Girls go to school. People are working more hours and there are many cars on the street.

Many school girls are older, since they missed the years of high school during the Taliban period. Women work more but the acceptance level is very low.

When I was going to do my exam for the YES program, all my classmates were asking if I was allowed to do so.

I didn’t see anything wrong with it and I couldn’t find a reason why my parents would say no to it. Later, my parents were the main encouragement. Since my story, a lot of girls have been allowed to go to colleges in different parts of the world.