Afghan women remain wary of politics – and rightly so 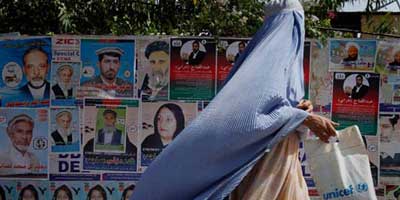 Afghan women, the reluctant cause celebre of post-9/11 international politics, marked this year's International Women's Day in an atmosphere of uncertainty. There is international pressure to negotiate with the Taliban and to altogether abandon the pursuit of women's rights in Afghanistan.

Needless to say, even though this turn of events is alarming, the fact that it is happening is not surprising. After all, the introduction of gender politics in Afghanistan was fraught with problems from its inception. It was a noble venture that meant well but it neglected the fact that individual rights were meaningless in a traditional society where the place of both men and women was defined through their membership of a family.

Given this context, Afghan women simply could not be liberated or empowered in isolation from their families. To empower the women, the whole society had to be empowered. But this reality was too complex to fit into the kind of neat, good-versus-evil moral binary that was needed to provide an ethical context to Operation Enduring Freedom.

As a result, Afghan society was presented to the world through the prism of gender politics as a nation divided between male aggressors and female victims. The campaign was initially successful and encouraged Afghans to wash their dirty linen in public, allowing the more outrageous cases of domestic violence to become the subject of international press stories. The loss of dignity and respect that accompanied the press revelations was the price Afghans had to pay if they wanted to sustain international interest in their country and ensure the continuous flow of aid.

But times have changed and more recently even the mutilated face of Bibi Aisha could do little to stop London, Kabul and Washington from pursuing negotiations with the Taliban.

The misogynist enemies of yesterday are the sought-after negotiating partners of today. The international community needs the Taliban in order to leave the country without losing face. A vast majority of Afghan women anticipated this scenario early on and rather wisely decided not to get involved in gender politics.

Despite their widespread illiteracy, most Afghan women had the sense to realise that the international gender politics introduced to their country in 2001 were beyond Afghans' own control; hence it was not worth the risk of antagonising their own families by allying themselves openly with the new politics of gender equality.

In three decades of war, regimes had come and gone and international politics had shifted beyond recognition. But the family had remained, allowing the survival of millions of people way before Afghan women were discovered as a worthy moral cause of international concern.

Afghan families were far from perfect but they had the advantage of resting on centuries of tradition rather than relying on whimsical policies formulated in the distant cities of London, New York and Washington. Weighing up the pros and cons of individual liberation in a traditional society versus the merits of sticking to tried and tested traditions, most women opted for the latter.

Their wisdom was proven recently when Joe Biden announced that the US was to leave Afghanistan by 2014 "come hell or high water".

If a vast majority of Afghan women regarded the post-2001 gender politics with a healthy dose of suspicion, the Afghan political clans were quick to make use of the new opportunities, placing their own women in positions of power. The conflict of interest that affected ordinary Afghan women did not exist for the women of elite jihadi and technocrat clans currently in charge of the country. After all, by taking over political posts, far from antagonising their families, these women further legitimised and expanded their family's scope of influence.

Having so extended the family's sphere of power, they also gained international accolade and fame, which was an added bonus. Few people outside Afghanistan realised that many of these women owed their rise to power not so much to personal merit but to the exalted position of their families. After all, politics in Afghanistan is often nothing more than thinly disguised private businesses run by elite families.

This is not to dismiss the small number of genuine grassroots women's rights activists who owe their prominence to their own effort, bravery and intelligence. But, as the recent crisis surrounding women's shelters revealed, the women co-opted in the government are likely to side with the political establishment even at the cost of compromising the safety of their fellow Afghan women.

Gender solidarity is something that has yet to emerge in a traditional society where women have internalised the male values of clan solidarity and political rivalry. That is why ordinary women and women of the ruling class alike tend to side with their families, even if their families stand for misogynist values or support the Taliban.

This truth, in turn, has allowed women's rights to be reduced to a mere smokescreen for the expansion of family-run, politico-financial ventures thinly disguised as politics. International politics, including in its more recent guise of gender politics, might come and go in Afghanistan but the family is there to stay.

Nushin Arbabzadah writes the "Islamic Republic Next Door" column on Afghanistan for Tehran Bureau. She is a former BBC journalist and a regular contributor to the Guardian