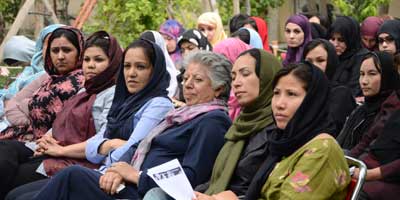 The first girls secondary school opened in Kabul in 1941

Women in Afghanistan actually had the right to vote 7 years before women in Switzerland.  1964 vs 1971

Collapse of the pro soviet regime was 1989 – this was followed by a civil war that raged until 1994 when the Taliban gained control.

When the Taliban came to power they systematically institutionalised the discrimination of women.

The Taliban fell in 2001, but after just 7 years under their rule:

Since international intervention there have been some positive steps, some of the positive legal frame works are listed at the end of the fact sheet.

Are women being included in peace?

Since international intervention there have been some positive steps in terms of legal frame works:

However some activists said that there were already warning signs at this stage, the first draft of the constitution was very weak and did not emphasize women’s equal rights in the same way and it was only through advocacy and campaigning that these gains were made.

In December the international community will meet at Bonn in Germany for a Foreign Ministers conference where governments will make statements about their expected levels of both aid and military involvement for the next 10 years.  This is a key time to make sure that women’s rights are not neglected in the exit strategy.