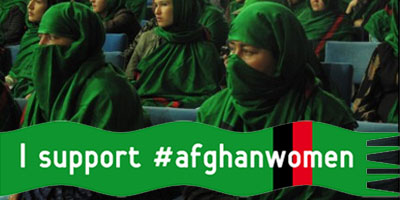 Safe World for Women is a partner in a multi-agency campaign to ensure Afghan women's voices are heard at an international peace conference in Bonn to decide the future of the country.

7th October 2011, was the tenth anniversary of western intervention in Afghanistan. 10 years ago “women’s rights” was central to the rhetoric used at the time of invasion. 10 years on we need to keep the issue of women's rights at the forefront of any debates for the future of the country.

In December the international community will meet at Bonn in Germany for a peace conference where governments will make statements about their expected levels of both aid and military involvement for the next 10 years. This is a key time to make sure that women’s rights are not neglected going forwards.

Afghanistan has its own vibrant women’s movement and women are campaigning and mobilising to make sure that the international community doesn't forget the promises that it made to Afghan women.

The women’s movement in Afghanistan has long used green scarves in their campaigning to symbolise their movement – so Channel 16 in partnership with the Afghan Women’s Network is calling on people to wear green scarves in solidarity with the women of Afghanistan as part of a photo petition that we will deliver to ministers before they attend the Bonn conference.

These images will also be made into a solidarity photo wall which will be taken to the Bonn Conference and erected outside the event as a visual reminder of the rhetoric of intervention and a global display of solidarity with Afghan women.

Safe World Field Partner, Young Women for Change, is at the forefront of the campaign for women rights in Afghanistan

Founded in April 2011, Young Women for Change (YWC), is an independent non-profit organization consisting of dozens of volunteer women and male advocates across Afghanistan who are committed to empowering Afghan women and improving their lives through social and economical participation, political empowerment, awareness and advocacy.

YWC members are all volunteers and the organization does not receive any grants for its advocacy and awareness programs. All advocacy efforts by YWC are self-funded, through donations and fundraising.

In addition to awareness programs, YWC held the very first anti-street harassment march in Afghan history, and will be conducting the first ever large-scale study of sexual harassment in Afghanistan soon.

Ensure voices of Afghan women are heard at the Bonn Conference, including the Afghanistan Women’s Network, and that agreements made at the conference explicitly call for women’s rights in Afghanistan to be protected not undermined.

The Afghan Women’s Network is asking the international community to: