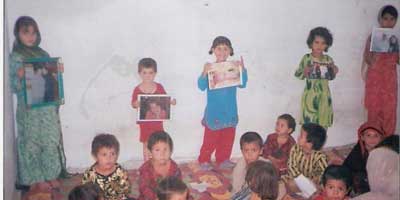 "Jamilla told me she was hoping there would be a new battle in Afghanistan – the battle of the pen."

Jamilla was overwhelmed by the demand for education among her community.
She taught in stairwells and on rooftops.

Jamilla was not a teacher when she, her husband and children fled Afghanistan in 1992, but she was so incensed by the sight of children rummaging in rubbish dumps for things to sell, that she set up makeshift schools to help them.

Jamilla was overwhelmed by the demand for education among her community. She taught in stairwells and on rooftops. Many of the students were orphans who couldn’t pay. Even those with families couldn’t afford the 65p per month fees.But Jamilla taught them and her husband, Nabi, supported her.

I had preconceptions about refugees. I thought they would be concerned only with their basic survival.  Yet, while the people I met lived in desperate situations, they had forward-thinking attitudes.

Everyone wanted to talk to me.

I was nervous at first. I felt under-qualified. But I also felt privileged that people wanted to share their lives and hopes with a stranger.

All the Afghans I met wanted peace in Afghanistan and to return there, citing education as a pre-requisite to sustainable peace.

Jamilla told me she was hoping there would be a new battle in Afghanistan – the battle of the pen.

Children told me they wanted to be doctors and engineers so they could grow up and help a country many of them had never seen and others barely remembered.

I thought Jamilla was not only dedicated, but brave.

The Taliban, who oppose the co-educational classroom that Jamilla insisted upon, were, and still are, very active in Quetta. I asked Jamilla about the Taliban. “Taleb, directly translated, means seeker of knowledge and my students are more Taleb than they are," she said.

On the issue of educating girls, she said, “A woman is the bearer of a whole generation. Change will never come in the lives of the Afghan people unless our women are educated.”

Despite the fact that we were of a similar age, Jamilla’s life and mine could hardly have been more different. But we connected instantly. I couldn’t speak Dari and she couldn’t speak Farsi, but she grabbed my hand and didn’t let it go the whole time we were together.

I also met Jamilla’s mainly female staff. In particular I bonded with Rahema Sherzhad. After I left Pakistan, my interest in the future of Afghanistan and its people grew. I became involved in the UK Afghan community and visited Kabul twice.

I kept in contact with Jamilla and Rahema, and a few years later Rahema got married, moved away and opened her own school, which she named after me.

I was deeply moved when the photographs of the Marnie Smith Middle School arrived and I knew that I had to take the belief that Rahema and Jamilla had shown in me very seriously indeed.

I decided to set up Trust Sulha. Sulha is the Dari word for peace. Trust Sulha to me signifies the trust Afghans have that one day they will have peace.

"It helps to know that people care"

If refugees living in desperate circumstances can envisage that, then I have to have faith in that optimism. Through supporter standing orders to our bank account (just £2 a month will, over the course of a year, pay a teacher’s salary for one month), an annual fundraiser called Dance For Peace, smaller events and donations from individuals and community groups.

I get some money out to the schools every couple of months. It’s never enough and it isn’t easy, but I know that however much I struggle, Jamilla and Rahema, their teachers and 2,000 students have overcome things I cannot imagine and they inspire me to continue helping as much as possible.

As well as the financial support for rent, utilities, wages, equipment, books and warm clothes, I know it helps those teachers and students to know that people far away from them do care about their future.

The letters I receive from the children, which are on our website, are very touching. For many, school is their only hope and if it wasn’t for Trust Sulha they would not be able to attend.

The Afghan students follow the Afghan curriculum so that as they return to Afghanistan they can slot into schools there.

And while many do return, many of them will stay in Pakistan for decades, perhaps forever, and they will go on to have their children there.

Both Jamilla and Rahema have told me that they will not leave Pakistan until the last Afghan refugee has done so. It is my intention that Trust Sulha will not leave either.