Uganda: Where child sacrifice is a business 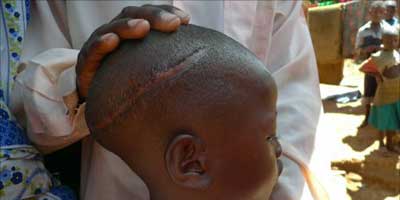 Uganda: Where child sacrifice is a business

The villages and farming communities that surround Uganda's capital, Kampala, are gripped by fear.

Schoolchildren are closely watched by teachers and parents as they make their way home from school. In playgrounds and on the roadside are posters warning of the danger of abduction by witch doctors for the purpose of child sacrifice.

The ritual, which some believe brings wealth and good health, was almost unheard of in the country until about three years ago, but it has re-emerged, seemingly alongside a boom in the country's economy.

The mutilated bodies of children have been discovered at roadsides, the victims of an apparently growing belief in the power of human sacrifice.

Many believe that members of the country's new elite are paying witch doctors vast sums of money for the sacrifices in a bid to increase their wealth.

"Child sacrifice has risen because people have become lovers of money. They want to get richer," the pastor says.

"They have a belief that when you sacrifice a child you get wealth, and there are people who are willing to buy these children for a price. So they have become a commodity of exchange, child sacrifice has become a commercial business."

The pastor and his parishioners are lobbying the government to regulate witch doctors and improve police resources to investigate these crimes.

Sometimes, they accuse us of these things because we make no arrests, but we are limited.” Commissioner Bignoa Moses Anti-Human Sacrifice Task Force

According to official police figures, there was one case of child sacrifice in 2006; in 2008 the police say they investigated 25 alleged ritual murders, and in 2009, another 29.

The Anti-Human Sacrifice Police Task Force, launched in response to the growing numbers, says the ritual murder rate has slowed, citing a figure of 38 cases since 2006.

Pastor Sewakiryanga disputes the police numbers, and says there are more victims from his parish than official statistics for the entire country.

The work of the police task force has been strongly criticised by the UK-based charity, Jubilee Campaign.

It says in a report that the true number of cases is in the hundreds, and claims more than 900 cases have yet to be investigated by the police because of corruption and a lack of resources. 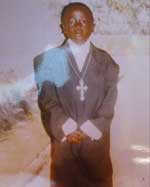 Stephen's decapitated body was found in a field

Tepenensi led me to a field near her home where she found the body of her six-year-old grandson Stephen, dumped in the reeds. She trembled as she pointed out the spot where she found his decapitated body; he had been missing for 24 hours.

Clutching the only photo she has of her grandson, Tepenensi sobbed as she explained that although the local witch doctor had admitted to sacrificing Stephen, the police were reluctant to pursue the case.

"They offered me money to keep quiet," she says. "I refused the offer."

No-one from the Ugandan government agreed to do an interview. The police deny inaction and corruption.

The head of the Anti-Human Sacrifice Police Task Force, Commissioner Bignoa Moses, says the police are doing all they can to tackle the problem.

"Sometimes, they accuse us of these things because we make no arrests, but we are limited. If we get information that someone is involved in criminal activities like human sacrifice, we shall go and investigate, and if it can be proven we will take him to court, but sometimes the cases are not proven."

At Kampala main hospital, consultant neurosurgeon Michael Muhumuza shows me the X-rays of the horrific injuries suffered by nine-year-old Allan.

They reveal missing bone from his skull and damage to a part of his brain after a machete sliced through Allan's head and neck in an attempt to behead him; he was castrated by the witch doctor. It was a month before Allan woke from a coma after being dumped near his village home.

Allan was able to identify his attackers, including a man called Awali. But the police say Allan's eyewitness account is unreliable.

Some children are cut to collect blood for ritualsLocal people told us that Awali continues to be involved with child sacrifice.

For our own inquiries, we posed as local businessmen and asked around for a witch doctor that could bring prosperity to our local construction company. We were soon introduced to Awali. He led us into a courtyard behind his home, and as if to welcome us he and his helpers wrestled a goat to the ground and slit its throat.

"This animal has been sacrificed to bring luck to us all," Awali explained. He then demanded a fee of $390 (£250) for the ritual and asked us to return in a few days.

At our next meeting, Awali invited us into his shrine, which is traditionally built from mud bricks with a straw roof. Inside, the floor is littered with herbs, face masks, rattles and a machete.

The most powerful spell

The witch doctor explained that this meeting was to discuss the most powerful spell - the sacrifice of a child.

"There are two ways of doing this," he said. "We can bury the child alive on your construction site, or we cut them in different places and put their blood in a bottle of spiritual medicine."

Awali grabbed his throat. "If it's a male, the whole head is cut off and his genitals. We will dig a hole at your construction site, and also bury the feet and the hands and put them all together in the hole."

Awali boasted he had sacrificed children many times before and knew what he was doing. After this meeting, we withdrew from the negotiations.

We handed our notes to the police. Awali is still a free man.

Allan's father, Semwanga, has sold his home to pay for Allan's medical treatment, and moved to the slums near the capital.

Sitting on the steps of their makeshift house, built from corrugated sheets of metal, I showed the footage of our meeting with the witch doctor to Allan on my laptop. He pointed to the screen and shouted "Awali!" confirming he is the man who attacked him.

Pastor Sewakiryanga says without the full force of the law, there is little that can be done to protect Uganda's children from the belief in the power of human sacrifice.

"The children do not have voices, their voices have been silenced by the law and the police not acting, and the people who read the newspapers do nothing, so we have to make a stand and do whatever it takes to stamp out this evil, we can only pray that the government will listen."