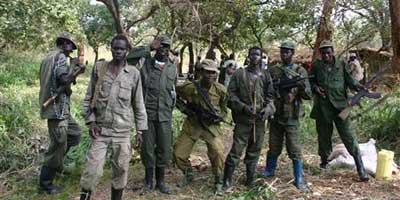 But not before the soldiers made her kill her one-year- old baby girl, by smashing her skull in, and then gang raped her.

It has been nine years since she was abducted, and almost five years since the country’s civil war has ended. But Abeja has never had medical treatment for the violence she had to endure.

In Ogur, Lira in northern Uganda, Abeja has come to a temporary medical camp run by Isis-Women’s International Cross Cultural Exchange (Isis-WICCE), a women’s organisation working with women in conflict and post-conflict settings.

The camp is specifically for women with reproductive health complications, which they have mostly sustained from being raped during the almost two decades of war.

First time treated by a doctor since the war

Abeja is one of the many women struggling to survive the horrors of the war. Her home is a few kilometres from Barlonyo, where the LRA massacred over 200 people in a single attack in February 2004.

The LRA fought in the north and north eastern parts of Uganda for 23 years. The war, which forced close to two million people into internally displaced persons camps for decades, was the most brutal that Uganda has faced since independence from Britain in 1962.

Thousands of people died as a result and the war was characterised by its use of child soldiers and the conscription of civilians into the rebel group. The LRA were forced out of the country in 2006 and are currently operating in the Democratic Republic of Congo, the Central African Republic and western South Sudan.

They forced me to kill my child

Abeja was captured in 2002. She was a wife and a mother of six children when the LRA abducted her with her youngest daughter and her son.

"When they abducted me I had my one-year-old baby girl and the boy. A few kilometres away from home, they forced me to kill my child," she says tearfully. "I hit her head on the tree and she died. The rebels immediately began to rape me."

Abeja can’t remember how many men they were; she says there could have been 10 to 15.

Afterwards they raped me

"The group that captured me raped me right after (I killed) my child. They even pushed different objects inside me as they raped me. Others were cutting (me) with machetes as some raped (me)," Abeja says as she shows the scars that remain on her arms and thighs.

She doesn’t know what happened to her son or if he’s still alive.

Abeja was sick for many weeks in the bushes of what is now South Sudan. Once she recovered she had a man waiting to be her ‘husband’. Like many abductees, Abeja had to kill or be killed. In her four years with the LRA she tells IPS she can’t recollect the number of people she was forced to kill, but she puts the number at more than 40.

One of the lucky one's who escaped

Abeja was one of the lucky few that escaped. She returned home in 2006 with a boy who is now about five years old.

Since the war ended in 2006, people went back to their original homes and depended on emergency aid.

A recovery and development plan was put in place in 2009 by the Ugandan government but this has not covered the emergency medical needs of the population. Most of the money went into building new blocks of health units and rehabilitating the destroyed ones.

It is not surprising that of the 400 women screened here at the Isis-WICCE medical camp, many are found to have pelvic inflammatory diseases.

Dr. Tom Charles Otim, a lead gynaecologist at the camp, says Abeja has lived with a prolapsed uterus for years now.

Uterine prolapse – the descent of the uterus into the vagina or beyond – is one of the long-term complications associated with sexual violence.

In Abeja’s case, her uterus is hanging out. But she allows her photo to be taken saying it is important for sexual violence survivors to have a face.

She and 39 other women are referred for further treatment to a regional hospital many kilometres away. She will need surgery, which costs about 200 dollars, to remove her uterus.

Like the many women who were raped during the war, Abeja not only has to live with the physical scars of the rapes but the psychological effects as well. She and women like her have to endure intense stigma from the community.

Her husband rejected her after she returned, and left her to raise their four surviving children and her child from the war.

Do they think I wanted to be abducted?

A majority of the women seeking medical treatment at the camp have chronic pelvic pain as a result of pelvic inflammatory infections.

"The infections are high here; because of the war, the women were not able to access medical care early," says Otim.

"This has had an effect on the women’s sexual lives and the majority of them have painful sex, and sometimes they don’t want to have sex but they have to because their husbands don’t allow (them to refuse)."

Many women who have come to the camp have fertility problems. Otim says pelvic pain takes a long time to cure and the women will need about 40 dollars for more follow-up visits at regional health centres, which are usually more than 40 kms away.

"Women cannot claim to have peace if their reproductive health is still an issue they are trying to contend with and struggle with on a daily basis," Isis-WICCE’s programme manager Helen Kezie-Nwoha tells IPS.

She says because of the sexual violence behind these reproductive health complications, women in northern Uganda need a specialised programme to provide them with the needed health services.

"Reproductive health issues are not easily spoken about, it is not something women will come out in public and speak about," Kezie-Nwoha says. But "we have built confidence over years of working with these women; that’s why the women can be able to open up and talk about the wartime rapes."

The district health officer in Lira, Nelson Opio, tells IPS that most of the reconstruction in the health sector has largely concentrated on building structures, and cannot address the immediate medical needs of a post-conflict community.

When war ends, there's a silent war to be fought

"When war ends, there’s a silent war that has to be fought," he says. "Politicians here think they will just put up structures so they can say ‘This is what I did during my time’ and ignore people’s real needs."

Most health centres in the district have no medical officers, while the entire district has only two gynaecologists.