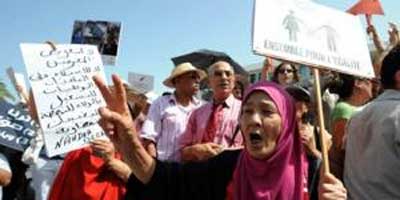 Tunisian women are rising up against a proposed article in the new constitution seen by many as an Islamist ploy to reverse the principle of gender equality that made Tunisia a beacon of modernity in the Arab world when it was introduced six decades ago.

The article must still be ratified at a plenary session of the interim parliament.

The 1956 code was the first of its kind in the Arab world.

It abolished polygamy, under which Muslim men are allowed to have as many as four wives, and the practice of repudiation, under which husbands could divorce simply by saying so three times.

"The code of Personal Status is a Red Line" At the same time, it instituted not only judicial divorce but also civil marriage.

It is a system now deeply rooted in Tunisian society, where women are active in all sectors of society.

While none of these principles would be lost under the proposed article, activists fear that its language represents a step toward rolling back their rights.

At issue, concretely, is that women's place in society would be defined in terms of their relation to men.

The offending article stipulates that the state guarantees "the protection of women's rights... under the principle of complementarity to man within the family and as an associate of man in the development of the country."

A petition addressed to the NCA, so far signed by more than 8,000 people on the Internet, says "the state is about to vote on an article in the constitution that limits the citizenship rights of women, under the principle of their complementarity to men and not their equality."

The petition stresses that women, who "are citizens just like men, should not be defined in terms of men."

Meherzia, a teacher, said that "'equality' becomes 'complementarity,' but in fact it is the whole legal framework for relations between men and women that changes."

Lawyer Sadok Belaid, at a debate on the CSP at Tunisia's Centre for Research on Women, said the "risks of regression are not just linked to women's rights; it is a challenge to one whole model of society."

"Women's rights in Tunisia are gains not to be taken away"The Human Rights League, feminist NGOs and the powerful General Workers' Union (UGTT) are planning a march in the capital on Monday evening to coincide with the anniversary of the Personal Status Code's promulgation.

The interior ministry has allowed the march to take place on Mohammed V Street in central Tunis, but not on the main road running though the capital, Habib Bourguiba Avenue.

In France, a group of NGOs and expatriates have also called for a gathering on Monday evening in Paris to "safeguard" the rights of Tunisian women.

The Islamist party Ennahda, which heads the ruling three-party coalition after winning the first post-revolution polls in October, has repeatedly stressed its commitment to the rights of women and to the CSP.

"Some MPs (in the NCA) have seen in this phrase some sort of retreat on fundamental principles like equality, on which there is a consensus between Ennahda and its main coalition partners," the Congress for the Republic and Ettakatol, both centre-left parties, he said.

But many remain fundamentally opposed to the complementarity clause.

"We are demanding the withdrawal of this article pure and simple, as it constitutes an assault on the gains made by women and on their humanity," Ahlem Belhaj, president of the Association of Women Democrats, said.

And some rights are still to be gained. For years, feminists have demanded equality of inheritance. As it stands now under sharia (Islamic law), a woman is entitled to just half of what her brother receives.

Habiba GhribiThe protest is even more poignant, coming amid controversy over 28-year-old Habiba Ghribi, who became the first Tunisian women ever to win an Olympic medal when she took the silver this week in the 3,000-metre steeplechase.

Ghribi's wore typical running attire -- shorts and a top that left her midrift bare -- and the reaction from some quarters illustrates why Tunisian women are concerned.

"Tunisia does not need medals that come from women who are uncovered and naked. We should strip the nationality of she who has dishonoured Tunisia with her nudity and debauchery," said one comment on Facebook.

That brought a retort from MP Ibrahim Kassas, of the independent Al-Aridha party.

"The underpants of Habiba Ghribi have honoured us," Kassas joked during a radio debate with female Ennahda MP Farida Labidi on Tuesday. "What have (Ennahda MPs') underpants done for us?"

More reasons to be worried

Saudi Abderrahim is a spokeswoman for Ennahda.

On a radio show in 2011 she stated:
“Single mothers are a disgrace to Tunisians and not have the right to exist, only rape victims should be entitled to protection under the law"..."in Arab-Muslim customs and traditions and in Tunisia there is no room for full and absolute freedom.." 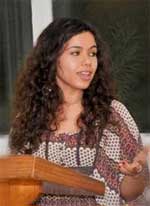 Aya Chebbi is a young Tunisian activist, amateur photographer, blogger and peace coach. She started her activism as a volunteer teacher and monitor in summer camps. As a children's instructor, Aya helped direct the National Organization for Tunisian Children aiming to improve the lives of children and protect their rights. She became a peer educator on sexual health and HIV/AIDS at the international network Y-Peer, a Red Crescent volunteer and a Soliya Facilitator. Following Tunisia’s revolution, Aya volunteered in refugee camps on the Libyan borders and also co -founded “Haqi”, an organization offering training on human rights integration in daily life. After her Fellowship with the World Peace Initiative, she became more interested in peace issues. Currently, Aya is the African Youth Coordinator at the Peace Revolution Project and recently, along with three other Tunisian activists, she founded a women led organization "United Women for Peace" aimed at defending women's rights.