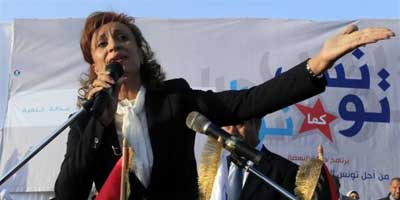 Voters in the Tunisian capital looked bemused this week when Suad Abdel-Rahim of the Islamist Ennahda party went on a walkabout to drum up support ahead of elections on Sunday.

In dark glasses, dyed curly hair and trendy white sports cap, she hardly fitted the image of the party whose ascendance after an uprising ended the rule of Zine al-Abidine Ben Ali this year has Tunisian secularists and Western allies worried.

"We are the Ennahda party, we are candidates in the election. We come to introduce ourselves in your neighbourhood," she stopped to tell a woman in the street, surrounded by a team of party volunteers on the campaign trail.

The potential voter, Siham, looked surprised but launched into her fears of what an Ennahda-ruled Tunisia would look like.

Abdel-Rahim pulled out a pamphlet to explain Ennahda's programme. It promises to ensure gender equality and women's freedom to work, educate themselves and wear what they want, she says -- gains of the secularism that for decades set post-independence Tunisia apart from most Arab and Muslim countries.

"I'll have a read of the leaflet and see, but I've no fears for now," Siham said afterwards. "As long as she is not wearing a hejab (headscarf) and can talk about their programme, then we can all stand hand-in-hand and vote for Ennahda!"

Tunisia's uprising last December and January started a regional movement of revolt that claimed Hosni Mubarak in Egypt and Muammar Gaddafi, who was killed in Libya on Thursday.

Sunday's election, the first free vote in Tunisia, will create a special assembly charged with writing a new constitution that will pave the way for fresh parliamentary and presidential elections.

But with Ennahda poised to come out on top in the weekend vote, the party and its leader Rachid Ghannouchi are trying hard to allay the fears of secularists at home and Western allies.

Abdel-Rahim, one of several women candidates from Ennahda, is one way to do that. She declined to talk directly to media.

"The phobia created by the previous president has led people to take a very negative image of us," said Assia, an Ennahda campaign worker. "We want to let people know our programme, our real ideology and, God willing, society will accept us."

The persecution the Islamists suffered under Ben Ali could now be rewarded at the ballot box. The former leader banned Ennahda, forcing Ghannouchi into exile, although many leftist politicians were also forced to leave or were jailed.

"All politicians are thieves, but at least if Ennahda steal, it's only a little bit, not everything," said one teenager, who declined to be named.

Unused to such street campaigning in a free vote, candidates from all the major parties have faced suspicion about what will happen once new rulers are installed in power.

Some Islamists, though, are concerned that Ghannouchi is going too far to assuage secularist and Western fears.

"What do people want?", a man sporting the kind of beard that is usually taken as the sign of an Islamist, said to Abdel-Rahim. "They want women to be like her, not you," he said, pointing to a veiled woman standing nearby.

"Ennahda says you can be either way," Abdel-Rahim responded, striking a glamorous pose in her sporty slacks. "Ennahda says Tunisian women are free to wear what they want."