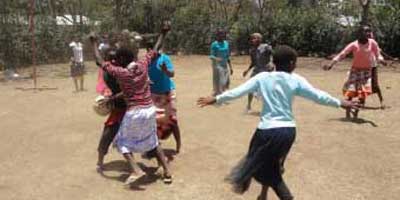 Asha, a Masai girl aged 12 years and being very bright in her class, was wanted in marriage by a man, 45 years old, from a Masai tribe far from Arusha.  He paid a dowry of several cows to the girl's father, a Masai Elder.

From that time onwards, her parents did not allow her to go to school; but she resisted. If it happened that she went to school, she was punished after school by her parents.

One day, the man came with other people to take Asha to be his wife. The following day – early in the morning, a journey started. They walked on foot from Mwandet, going to Arusha town to take a bus to Kiteto, where the man lives.

Escape to the Police

On the way, Asha noticed that she was going to be handed to a man as a wife. But she had no way out, as strong men – about seven in number, were escorting her.

When they approached Ngaramtoni, Asha saw the sign post written: police post. She says she had heard from Safina radio (watoto na vijana, aired by Shalom Centre) – and also she learned in school child rights clubs, that if you are in trouble and you need help, report to the police.

The group remained astonished; there was nothing they could do.

Struggle to Return to School

After meeting with parents, village leaders, and teachers, the police ordered the girl to be returned to school and go on with her studies.

Her parents were unhappy; they frequently punished her and did not allow her to attend school. One day, she forcefully went to school, but she was punished by her parents when she returned home.

Teachers and village leaders were not able to intervene in deep because of fear of being discriminated against.

Plot to Take Asha by Force

After several months, the man was demanding his wife from Asha's parents.

The man hired strong men to come and take Asha by force.

After arriving at Asha’s village, Asha knew that men had come to ambush and take her at night.

Second Escape to the Police

She decided to escape from home that evening and hid herself in the bush, and when it was 3 am in the night, she started walking 12 km to Ngaramtoni, alone, afraid of meeting people on the way,

She used unusual pathways. She walked hard and finally, she arrived in Ngaramtoni and went directly went to the Ngaramtoni police for rescue.

Asha spent over 12 hours at the police post. The police chief phoned Shalom Centre and shared a bit [about Asha] over the phone.

Back at School, Ready to Sit Exams

Shalom's staff went to the Ngaramtoni police post, and after getting information on what happened to the girl, they all agreed that Asha was in great danger, so she had to be rescued.

Asha is now completing Grade 6 and in January 2014, she will be in Grade 7 and will sit for the National Primary School Leaving Examination.

Support and Vocational Training for Girls

Girls at risk are supported for up to one year, through paying fees for a vocational training course that will enable them to secure employment and support themselves and their families. The girls are enrolled in a vocational training centre accredited by the Tanzania government and registered by the Vocational Education and Training Authority (VETA).

Through career counseling with Shalom's staff, girls opt to be enrolled in course of their choice. And through curriculum of both theory and practice, girls have an opportunity to learn a variety of skills such as cookery, sewing, hotel management, housekeeping, beauty and salon, secretarial course, early childhood education, and community development courses.

In the past few months some girls who engaged in sex trade secured employment after training as follows:

“You can’t imagine: I was unschooled, came from very poor family, and I engaged in the sex trade for two years – and drug abuse... and now, see, I am a school teacher!!! Mhh thank you, Shalom Centre.”

“Since Shalom came to our community, child rape cases have been reduced, hawking children in streets are rarely found, abandoned children living with disability are now in schools, and we are aware of children's rights and protection.“

“My life has really changed a lot since I am now busy doing something meaningful with my life, and have as well gained respect with the surrounding community. I now have hope of a better future than ever before.”

“Sheee!! I have learned a lot from Shalom and the police, that forcing our young children to get married is extremely illegal.

As the head of Masai in my village, I have convened a meeting to my people that no one should allow young girls to be married; this cultural practice must be stopped from now on.”