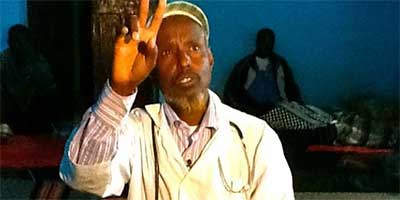 In Somalia there’s a belief that a mentally ill person can be cured by shutting them in a room with a hyena.

Mentally ill people in the war-ravaged country are often chained or locked up. Others are tied to trees and abandoned when their families are forced to flee fighting.

In one of the most moving radio interviews I’ve heard in a long time, psychiatric nurse Abdirahman Ali Awale, who is commonly known as Dr Habeeb, told how he was reduced to tears every day by what he sees.

“I have saved many, many patients who have been left to die. They have been tied to a tree and abandoned simply because they are mentally ill,” he told the BBC World Service.

Somalia has one of the world’s highest rates of mental illness with one in three people affected, according to the World Health Organisation (WHO).

But there has traditionally been almost no help. Somalia’s health sector was destroyed over two decades ago as the country descended into civil war.

The relentless shelling, fighting, killing and maiming, along with the repeated displacement of communities, has taken such a toll that Habeeb is on record as saying he doesn’t believe anyone in the whole of southern and central Somalia has good mental health.

The psychiatric nurse was spurred to set up the first of his six clinics in 2005 when he saw five mentally ill women being chased down the road by small boys.

He says his centres have since treated more than 15,000 patients. The most prevalent condition is post-traumatic stress disorder.

“This is usually what we see with many of our younger patients who come in,” says Habeeb. “We also see depression. A lot of our patients are very sad. They exclude themselves from society and they are very quiet and sad and stay in a corner.”

After the war, he believes the second biggest contributor to mental health issues is the widely used stimulant khat. The plant, which is chewed for its euphoric effects, has been linked to psychosis and depression.

But Habeeb doesn’t just treat people. He is on a mission to dispel the myths and stigma surrounding mental illness and end harmful practices.

This is done through radio broadcasts, lectures and classes.

“We tell them … that mental health illness is just like any other illness,” he told the World Service’s Outlook programme.

Many Somalis attribute behavioural problems to bad spirits and seek help from religious leaders or traditional healers. One of the most extreme treatments involves locking a person up with a hyena.

“In Somalia, there’s this belief that hyenas can see everything including the thing that causes mental illnesses,” says Habeeb.

“Two hyenas were brought from the bushes and brought to Mogadishu. Patients were locked in a room with the hyena with the belief that when the thing that caused the mental problem sees the hyena it would leave the body of the patient and the patient would be fine after that.”

This treatment is not cheap – the cost can be around $560, according to Habeeb. It’s also highly dangerous. Patients are left with long lasting trauma, physical injuries and even die, according to a WHO report on mental health in Somalia.

“I CRY EVERY DAY”

WHO says most mentally ill people in Somalia are chained up or imprisoned.

Habeeb told the BBC more than 170,000 people have been “locked and … left to die”.  And no one in authority is talking about it.

You don’t have to look hard to find numerous images on the internet showing people chained to trees, rocks and beds. Many are chained for years on end, leading to long-lasting trauma and physical harm. Some commit suicide.

But the use of chains is often an act of desperation by families rather than cruelty, according to WHO. Families may believe they are preventing the person harming themselves or others, and that this is their only option.

Habeeb's organisation, together with WHO, is pushing for an end to chaining.

But addressing mental illness is a very low priority in a country so devastated by fighting and hunger. It has also been ignored by international agencies.

Habeeb believes this is because treating mental health illness is expensive and does not bring quick results.

Not surprisingly, the work is exhausting.

“I am alone. I am one person and I’m dealing with big, big, big problems that no one is ready to admit. Personally, I cry seven to eight times a day. I’m a big man, I’m a grown-up man, and in this society it is not common to see a grown man cry.

“I’ve cried on TV, I’ve cried in public places, I’ve even cried in front of presidents for them to speak about this problem, even for one day.”