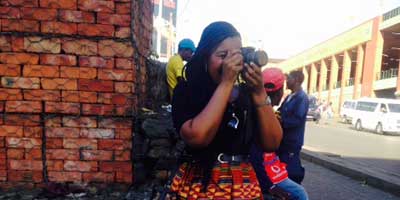 According to Pontsho Pilane, a South African journalist at The Daily Vox, dealing with harassment is part of the job for female journalists. Writing about her own experience she says,

“Men continuously feel the need to objectify me no matter how professional I try to be. While covering Marikana, a man pulled down his pants and exposed himself to me…”

which she took up at the office feeling that not only is it a safety risk, but also an impediment to her ability to efficiently do her job.

Sadly, Pilane’s observations are not the only problems facing women journalists according to a report by Media Monitoring Africa (MMA), ‘Visible Invisibility: Gender Discrimination in South African Media’.

MMA researcher, Lethabo Dibetse, says the research exposed that gender discrimination was a challenge largely fuelled by power and patriarchy. He further notes that an important aspect of the report was engaging journalists in their environment, to get better insight around how female and male journalists perceive their social gender roles and reaffirm their gender identities. This has also given the organisation an opportunity to explore how journalists write about gender, particularly masculinity.

According to the report:

Through the report, MMA aims to contribute to a broader discussion on gender and gender relations in ‘post-apartheid’ South Africa. This is an extension of their existing projects which are focused on the prevalence and nature of gender discrimination in 20 newsrooms in Zimbabwe and the masculinity in the media research, which looks at how masculinity is communicated and understood in the media.

Although very concerning, the fact that 25 per cent of the respondents indicated that discrimination in the newsroom happened once a week and once a month respectively indicates that it is not institutionalised and that sexual harassment is not as firmly entrenched in South African newsrooms as compared to other countries like Zimbabwe. This suggests that the negative trends can be addressed with the right interventions.

This is particularly important as it is MMA’s goal that citizens engage more critically and constructively with media.

Given how many workplaces are gendered and prehistorically managed by men, the key to lasting change then is also the issue of changing newsroom culture. Secondly, one of the achievements we have set out is to expose the realities of how difficult it is being a woman in the country and in our workplaces – and show how patriarchy is still entrenched in our society and hopefully, make men realise how privileged they are purely because they have penises. Of course, we also want to create awareness around creating safe and peaceful working environments for all employees where equality and productivity take precedent.

It is however important to note that the problem of gender discrimination cannot be isolated to newsrooms, with newsrooms being a mirror of what is prevalent in society. Yet another reminder that challenging patriarchy should be on the agenda all year.