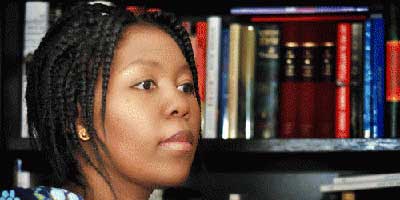 Sisonke Msimang is the Director of The Open Society Initiative for Southern Africa (OSISA).

Here, Sisonke talks about her experiences when she started the job in 2008

I was a nervous wreck. How on Earth would I do this?

My instinct was to focus on what I was good at. I have been involved in work on gender and women's rights since the beginning of my career. I thought I would make my mark by turning our workplace into a model for gender equity.

I imagined I could try out some ideas regarding flexitime and introduce more child-friendly policies. I had grand ideas about challenging people to appreciate that long hours in the office did not necessarily translate into higher productivity. And I wanted to ensure that female employees felt free from sexual harassment and that male employees understood the boundaries and were encouraged to contribute towards an organisation striving for gender equity.

I would make myself available to female staff members by listening to their problems and mentoring and coaching them through difficulties.

All this would be in addition to the daily work of driving strategic direction, keeping an eye on finances, managing a diverse and engaged board of trustees, monitoring the political temperature in our 10 countries of operation and responding to requests for analysis and information from colleagues in Budapest, London, Brussels and New York.

Gender utopia was not the pressing need

It became evident quite early on that (a) the gender utopia I thought I might achieve simply was not the most pressing organisational need of the moment; (b) given who I was (young, black, female) the pressure to be excellent was intense; and (c) once you are the boss, not many people are interested in sharing their problems. When they are, it's usually with a view to wriggling out of some obligation. So I nixed the mentor idea.

So, much as I understood that relegating gender to the category of "soft" issues was problematic, there was no getting around the fact that others would read any preoccupation with gender as precisely that: an inability to deal with the core issues of the job.

The organisation did not need a gender warrior

The organisation did not need a gender warrior. It needed a higher degree of internal accountability. This required less of the kinder, gentler woman's-touch approach and more of the hard-nosed tactics often associated with men. It required confronting people, paying close attention to detail on institutional policy, looking closely at the audit and it required me to say no - very often to men older and more educated than I am.

It also demanded of me an ability to let people go if they were undermining the institution.

I was not turning out to be the feminist leader I had hoped I would be.

By the end of my first 18 months, I had had no cosy chats and certainly didn't feel as though I was bringing any kind of feminine sensibility to the workplace. It was a tense time. I was not turning out to be the feminist leader I had hoped I would be.

Yet there were also clearly a number of ways in which I was acting out classic female leadership traits. I spent a lot of time in the office. The organisation needed a manager focused on in-house matters. In some ways I was playing into the classic gender binary: women spend time within the boundaries of the compound, as it were, whereas men go out there and conquer the world.

In time I learned to use every minute during regular working hours wisely. I cut lunches short, seldom lingered to chat in corridors and turned the BlackBerry on at about 8pm so that I could respond to my colleagues in New York, who began to send messages just as I was getting home at 5pm.

There is no question that a man in my position who had chosen to spend less time in the office might have been viewed as an underperformer. I was given more leeway and there was less pressure on me from my colleagues because they knew I had a small child. It is complicated to be a woman with children who chooses career and family.

The costs of trying to juggle are high.

I have become more of a relaxed leader

Today the institution I help to manage has grown. It has a staff of 87 and its budget is about R250-million. It operates on a range of human rights and governance issues, from monitoring the conduct of mining companies in poor communities and sensitive ecosystems to supporting litigation related to human rights abuses in countries as diverse as the Democratic Republic of Congo, Swaziland and Malawi.

The organisation is no longer tension-filled. I have become a more relaxed leader.

Those early hard-nosed decisions have paid off. People understand that accountability is key and so there is far more peer monitoring. People have largely bought into the broad vision we have of a region in which change starts with us.

I am proud of our progressive maternity and paternity leave policies

I have two children now. I still have not had time to sit down and have any of those mentorship conversations I thought I would. But I feel younger colleagues, both men and women, have learned a few things from me by watching.

We have no more women in leadership positions today than we did when I started the job. But I am proud to say that we have incredibly progressive maternity and paternity leave policies.

Women who have given birth are entitled to six months paid leave and men whose primary partner has had a child are entitled to three months paid leave, taken within the first year of the child's life. Staff members who choose to adopt are similarly entitled. We have also paid careful attention to creating an environment that is free of sexual harassment.

As I learned I began to earn respect

I have learned an incredible amount in the past three years. In spite of all my misgivings and concern about whether or not I would be respected simply because of my age and my gender, I have been provided with the type of support many managers can only dream of. It wasn't automatic and it should not have been. But I felt that as I learned, I began to earn respect.

You do not become a leader by virtue of the position you occupy. Every day in my job, I am reminded that you become a leader because those you work with for a common cause give you permission to lead.

In an organisation that is brimming with talent and intellect, I have been provided with the permission to lead. I have been allowed to make mistakes and to pick myself up and try again.

My dreams of turning the organisation into a gender experiment have given way to a more realistic but no less lofty set of goals: to ensure that we build a Southern African institution in which the values of hard work, integrity and authenticity are embodied by a team of women and men committed to a more transparent and accountable region.

That a woman happens to lead the team is both essential and completely incidental. I have learned to live with the contradictions that come with the territory.