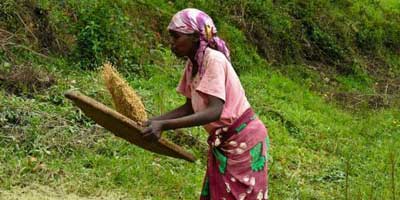 Mistreatment and lack of payment is common for domestic workers in Rwanda, where there are no labor laws specific to their work. Young women and men working as house help are finding support through new associations that negotiate contracts with employers and advocate for their rights.

He says he likes being a domestic worker for the most part. But he adds that household cleaning requires so much energy yet pays a low wage.

Some families here also mistreat their domestic workers, he says, while he cooks and washes dishes in the home of his boss.

“When I see house girls being mistreated, it hurts me a lot,” Masengesho says.

Masengesho, who grew up in the rural Southern province of Rwanda, dropped out of school when his family could no longer afford to pay his fees. He decided to become a house boy, as they are called here, in order to make a living in Kigali because he lacks the skills to perform other jobs.

But if he found a higher-paying, more rewarding job, he says he would gladly leave household work. His dream is to become a vehicle technician.

Domestic workers say their jobs are difficult, especially when employers overwork, mistreat them or withhold their pay. There are no formal laws specifically dedicated to the protection of house help in Rwanda, but judges are encouraging domestic workers to report abuse under general labor laws. A growing number of associations for domestic workers aim to protect their rights, while other organizations provide skills training so that they can pursue alternative forms of employment.

There are no statistics available on how many domestic workers there are in Kigali, nor on how many may be abused, says Nicolette Nsabimana, a coordinator at Centre Marembo, a training and drop-in center that provides services to vulnerable youth.

A 17-year-old girl from the Rusizi district in the Western province, whose name is withheld to protect her identity, lives at Centre Marembo. She came here after working in Kigali for three months as a domestic worker.

“I came in town to search for a job of being a house girl because of poverty,” she says. “My parents were not able to pay school fees for me, and I took a decision of coming in Kigali town after being given a permission by my parents.”

She found a job as a domestic worker where her duties involved cleaning the house, cooking for the whole family, washing clothes, looking after children and performing other small chores. But she says her employers began to mistreat her, including underpaying her.

Her salary did not match the amount of work required of her, she says, asserting that her boss should have paid her closer to 20,000 francs ($32) each month. They promised her 7,000 francs ($11) each month, but two and a half months passed before her employer paid her.

She left the job without receiving even half the money she had earned. She reported her underpayment to Centre Marembo but not to local authorities.

Clementine Nyandwi, a 17-year-old girl from Rwanda’s Southern province, never attended school because her family could not afford the fees. So she decided to leave her home in March 2012 and travel to Kigali to earn money as a house girl to support herself and her four siblings.

Nyandwi says that before starting her job, she thought it would be profitable and would allow her to live comfortably as well as send money home to her family, but she was wrong.

Immediately, she was displeased with how her bosses treated her. Maize flour causes her stomach pain, she says, yet her bosses ignored her request to avoid it and served dishes made with the flour anyway.

Another challenge Nyandwi faced was too little time off because her boss expected her to watch her child for hours on top of her other duties. She says she received a low wage despite the long hours.

“I lived in bad conditions when I was doing this job because I was not satisfied of the wage,” she says.

“But when I decided to quit the job, I was not given the total,” she says.

“And I had worked two more weeks after receiving my salary,” she says.

So she decided to quit.

“Even if all this happened to me, I did not decide an option of finding a lawyer, but I decided to leave the job and search for other job of house girl,” she says.

Nyandwi is still looking for work in Kigali.

There are no labor laws specific to domestic workers in Rwanda, says Ildephonse Nkundabagenzi, a judge at the Intermediate Court of Nyarugenge in Kigali. As of now, domestic workers receive protection under the general Rwandan labor law like other laborers.

The general labor law, which covers public and private labor, can be found in the Official Gazette of the Republic of Rwanda. As of May 2009, Article 27 states that employers must give workers at least 15 days notice of termination, and employers may have to pay damages to dismissed workers if they unlawfully terminate their contracts. Article 47 explains the obligations of employers – namely that they must pay workers their agreed wages regularly and on time.

This is the protection that domestic workers need to remember, Nkundabagenzi says. Mistreated domestic worker can file cases against their employers in court for violating these rights, such as denying them payment.

“We ask the employer to pay the whole amount of money to the employee,” Nkundabagenzi says of rulings typical in these cases.

But Nsabimana, who helps young house workers who come to Centre Marembo, says seeking justice through the legal system is uncommon for domestic workers.

“Some domestic workers don’t know their rights, and others are afraid of their bosses,” she says.

These workers decide to stay silent in fear of losing their jobs and only sources of income, she says.

Emile Mukatisiga, the head of the Musanze Access to Justice Center, a court affiliated with the Rwandan justice system in the Northern province, confirms that reports of abuse from domestic workers are rare.

“From January 2012 up to July 2012, we received only three domestic workers who have the problem of being abused,” Mukatisiga says.

Johnston Busingye, principal judge of the East African Court of Justice, says domestic workers should be treated with the same rights as any other Rwandan citizens.

“What people should know is that every person has a right to enjoy their rights in accordance with laws as an employee,” he says.

He says the media works to raise awareness about rights.

“In Rwanda, there are various programs that teach people about their rights, either on radios, television or in different places,” Busingye says.

People can call in to several talk shows and offer ideas and advice to house workers.

“Thus, domestic workers should not keep quiet in the case of violence because of fearing their bosses,” he says.

Busingye says that a domestic worker can file complaints of abuse with the courts, but he would rather the concerned parties solve the problem among themselves.

“What I want is that they could sit and solve their problems without resorting to courts,” he says.

House worker associations, a growing phenomenon in Rwanda, are aiming to do just that.

Since leaving her job, Nyandwi has joined Vision International Company, an organization that advocates for the rights of domestic workers and helps them find suitable jobs. In cases of future violence or mistreatment, she says the association will work to protect her rights.

Obed Nsabimana, who is not related to Nicolette Nsabimana, is the managing director of house boys and girls for Vision International Company. He says that the association, which began in 2009, has 250 house girls and boys as members.

The association negotiates contracts with employers on behalf of the domestic workers.

“In our company, before a domestic worker starts the job, he or she has to sign a contract with his or her boss,” Nsabimana says. “There are also a number of issues they discuss with the association leaders, like the conducts of a domestic worker.”

House girls and boys who are members of the Vision International Company start with a salary of 15,000 francs ($24) per month, which the association collects from the employer so that it can monitor the pay of its members, Nsabimana says. Raises depend on the domestic worker’s performance.

This is one of the important perks members receive, Nsabimana says. Domestic workers who are not affiliated with an association have to negotiate themselves and may start at 10,000 francs ($15) a month or less. Another benefit is safety.

This way the association can mediate any conflicts.

“When there is a problem between a boss and domestic workers, we visit the boss in question and we discuss the problem,” he says. “When we notice that the boss is not able to solve that problem, we resort to competent judiciary organs.”

If domestic workers are fired, the company helps them to find a place to stay until they find another job, Nsabimana says. And the staff always encourages domestic workers to set up a plan to save their wages so that, if they wish, they can eventually quit housework in pursuit of a higher-paying career.

Florence Ayingeneye, a 21-year-old house girl who works in Kigali, is a member of the association.

“As far as I am concerned, I do not experience any problem where I work even if I don’t have a relationship with my employer,” she says. “I respect and fulfill my work, and my employer respects me.”

She says she is lucky because she currently works for a family who treats her as if she were their daughter.

“However, even if they treat me well, it does not forbid me to notice how my fellow domestic workers are mistreated,” she says.

Some bosses mistreat domestic workers by insulting them, firing them without reason, and not paying them on time or at all, she says. A house girl or boy can make a small mistake, such as overcooking food, but their employers will give them a heavy punishment that doesn’t match the mistake.

“Domestic workers often face violence when they are not members of any association, for association members get protection,” Nsabimana says.

Other associations also exist, such as Wako Good Services Company.

Nyandwi says she hopes that bosses change and start to respect their domestic workers because they play such a large role in their homes.

“Bosses should also know that a domestic worker is a person like others,” she says. “And therefore, they should give them a value.”

Other organizations are working to train domestic workers so that they can find alternative forms of employment. Centre Marembo offers vocational skills training to disadvantaged youth. The 17-year-old living there from Rusizi district says she’s learning how to sew clothing.