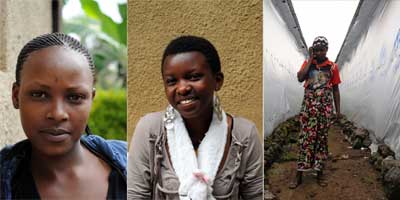 Still an infant in April of 1994, Jeanette, doesn’t remember when Rwanda descended into the quickest and bloodiest genocide since the Holocaust.

JeanetteShe never knew her father, nor did she ever meet her two aunts, three uncles or grandparents. All of whom killed in the massacres.

Nowadays, Jeanette (18) is the head of her household. She lives with her mother, who suffers from severe post-traumatic stress, in a small, square, brick and mortar house. It was built by a government program for Tutsi survivors of the genocide. They have no electricity, no toilet and no running water.

The only hope she has for her country is that it might never see war again. Other than her hope for peace, Jeanette has few thoughts about her future. She prefers not to talk about it.

"Please don't ask me about school," she says, having dropped out of secondary school to care for her mother. "I will never be able to think about that".

Jeanette is part of a generation of young women in Rwanda growing up in the shadow of Rwanda's genocide and subsequent renaissance. Living less than three kilometres from the centre of Rwanda's capital Kigali, she has witnessed her country's rapid development. While she is impressed with the tall buildings rising in the distance, she feels she has failed to participate in the progress.

Coming home for the first time

SolangeSolange (18) was born in Rwanda but she knows little of the country or its past. She and much of her family fled to the Eastern Democratic Republic of Congo - along with approximately two million other exiles - when she was just an infant.

After years of living in one of the most violent places on earth, she has no family left aside from her brother who never left Rwanda. She recently returned to Rwanda after having spent nearly all of her life as a refugee. She says she doesn't care about the past and is hopeful for the future.

"I heard things were better in Rwanda and now I see that it's true," she says. "I don't worry about war now. All I care about is studying and helping my brother plant our crops."

As the genocide ended and Solange's family was fleeing the country, others were finally returning home to Rwanda after a long absence.

Hope for the future

Clemence (17) still has both of her parents and says her family was mostly spared from the violence of the genocide because they fled to the neighbouring Democratic Republic of Congo before the violence broke out. She was able to return just after the war ended in July of 1994.

She is in her third year of secondary school and hopes to study Computer Science at University.

"I'm not sure what I will do with my life," she says, "but I feel like I can do anything".

Rwanda is known for being one of the best places on earth to be born a girl. It is the only country on the planet where the parliament is made up mostly of women. Rwanda's public sector work force is also nearly 50 percent female but the country's private sector is still dominated by men.

This week Rwanda enters an official period of mourning for the 1994 massacres that took approximately 800,000 lives in the span of 100 days.

The theme of this year's period of commemoration is: Learning from our past; building our future.