Malnutrition: the scourge of Rwanda's children 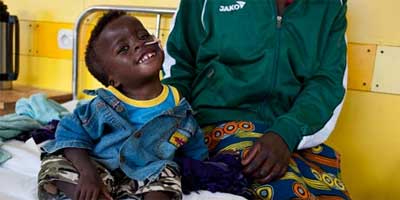 More than 2.6 million children worldwide die each year from undernourishment. As a campaign to cut child mortality is launched, Jay Rayner in Rwanda reports on how, even in such a fertile country, poverty and high prices are a fatal combination.

Her name is Masezeno and she is 12, though you wouldn't know it to look at her: seven, or perhaps eight, at best. She sits by herself on her bed in her blue hospital gown, her knees pulled up to her chest, eyes wide, watching the room. She has little hair. She is in the children's ward of the new Butaro district hospital in northern Rwanda and it is here that I meet the stark reality of chronic child malnutrition.

At least she isn't screaming any more, as she was a few days ago, when she was first admitted with a condition known locally as kwashiorkor, the symptoms of which include painful swellings or oedemas, caused by long-term protein deprivation. She is still a little swollen, but the treatment is dealing with that. Other symptoms will be with her for life. Masezeno is at least 10cm shorter than she should be, and the medical staff say there may be intellectual impairment by as much as 15 IQ points. In the blunt, unforgiving language of malnutrition, she is stunted.

It shouldn't be this way, for here in Rwanda the fields hang heavy with food. The tightly packed terraced fields which, as in so much of this tiny landlocked east African country, are planted right to the tops of the most vertiginous hills, groan with plantain and cassava; with maize and beans and potatoes both sweet and, as they call them in this part of the world, Irish. Rwanda looks at first sight like a country built of things to eat.

But these burgeoning crops hide a bitter secret. In Rwanda it is not only the fields that are fecund. It is the most densely populated country in Africa, its 10 million-strong population weighted heavily towards the young – half of them are under 18 – and far too many of those children are simply not getting enough of the right things to eat. For all that food in the fields, 44% of Rwanda's children remain, like Masezeno, chronically malnourished. They are also stunted.

Last week, the charity Save the Children launched the latest stage of its No Child Born To Die campaign. It called on the prime minister, David Cameron, to name a day for a global summit on child malnourishment.

Enormous advances have been made in tackling child mortality in recent years. A huge global push on vaccinations and investment in frontline medical care have reduced the number of children under five dying each year from 12 million in 1990 to 7.6 million.

But chronic malnourishment – not famine, but the simple grinding poverty of a diet that does not give children what they require – remains the world's dirty hidden crisis. Around 170 million people worldwide are now stunted, which has immense implications for the productivity and development of their countries.

If nothing is done, it is estimated that half a billion children will be stunted over the next 15 years. It amounts to a lost generation. What's more, it is the underlying cause of 2.6 million child deaths a year, or 300 every hour. The death certificate may record pneumonia or a digestive infection. The fact is that a malnourished child simply doesn't have the immune system to fight off a disease.

There has been progress on malnutrition in Asia. However, half of all child deaths attributed to malnutrition still occur in Africa, despite the continent having only a third of the world's malnourished children. A combination of rising food prices, political instability and lack of technological progress in farming have meant that improvements in child nutrition here have proved hard to come by.

Since the genocide of 1994, which claimed the lives of an estimated 800,000 people, Rwanda has done much to care for its children. Deaths among under-fives have halved, from 152 per thousand a decade ago to 76 per thousand now (in the UK the figure is 5.3 per thousand). But making sure that those children who live grow to their full potential is proving much tougher. Last week I travelled across Rwanda with Save the Children to see the scale of the problem and the impact it has on families.

Which is how I came to meet 23-year-old Josephine and her two little boys. She was waiting patiently in line with the other women of her village at the Ntaruka health centre. Until a year ago the centre was little more than a shack with plastic sheeting for walls and a roof that leaked whenever the rains came, which in Rwanda is often. Now there are low-slung brick buildings overlooking the lake, surrounded by outcrops of black volcanic rock courtesy of the five smouldering peaks that stand guard.

We are outside on the veranda, where volunteer health workers are helping to weigh Josephine's sons, aged three-and-a-half and 18 months. The eldest was displaying symptoms of chronic malnourishment, but it's clear from the measurements that a treatment with therapeutic food supplements – prime among them a fortified peanut paste called Plumpy'nut, which the children gobble up – has started to shift him out of the danger zone. But her youngest, Innocent, is still acutely malnourished. His arms are too thin. At just over 7kg, he is simply too small.

Josephine tells me that she had no idea there was a problem until one of the volunteer health workers came to her home to tell her. Was it upsetting? She shrugs. "Not really. They gave me the supplements." Gathering enough food for her family – she has other children at home – is tough. "I have no land and I am the only one who gathers food. I get it by working in other people's fields." Why did her children become malnourished? "Because I cannot get enough food."

Rwanda may well be hugely fertile, but global price rises – the cost of maize has doubled – make it impossible for women like Josephine to keep her children fed. "The supplements are very useful," she says simply. Her boys are the lucky ones. Their condition has been caught early.

I am taken to a typical rural village a short drive away, bouncing down rutted tracks, where the homes have floors of hardened mud and cooking is over open fires, which gives the main room the high tang of soot. There I meet Leonie and Immaculate, both widows, both mothers of six, each of whom has children displaying the most acute symptoms of stunting. Immaculate's nine-year- old daughter, Claudine, is particularly affected. She has learning difficulties and is very small for her age. "I was surprised when they told me," Immaculate says, "because I did my best to feed my children. I thought it was some other form of disease."

At another home I meet Vestine, who has lost three babies because she was malnourished during pregnancy and forced to work in the fields too close to her due date. She and her husband, Claver, have a daughter who is eight and 18-month-old twins. Their daughter in particular is showing symptoms of malnourishment. When Vestine leads me into the house to let me see what she has to feed them with, it is not really surprising. She is doing her best, but the pile of beans, potatoes and green leaves defines the word meagre.

Give me a year

Dr Agnes BinagwahoDr Agnes Binagwaho, the charismatic Rwandan health minister and a paediatrician by training, says that in many ways her country is a victim of its own success. "We have much better child survival, but in the poorer, less educated families we have less uptake of family planning. The result is that there is not enough food for all those children who a few years ago would not have survived."

There was, she says, also a problem specific to Rwanda. "We do not know why, but for many years our measuring charts were simply wrong. Those children shown as fine were often malnourished, those as malnourished were acutely malnourished, and so on." She noticed only in 2008, when she was comparing Rwandan growth charts with those from Europe. In Rwanda the crisis was literally hidden.

But Binagwaho is optimistic.

"It is not about food aid. We do not need food in Rwanda. We need education."

However it is, she says, about what is being grown. Cassava root, ground to a flour and cooked up as a doughy paste, is a traditional staple. It fills children up but has almost no nutritional value.

"It's also about how they treat vegetables. Families cook carrots too long, for example, so there is no vitamin A left." Along with charities like Save the Children, the government is running kitchen-garden projects to educate the mostly female farmers in how to get the best from their land. They are distributing new seed strains that are fortified with particular vitamins.

I ask her how long it will take to make real progress on the issue. Binagwaho, famed for her take-no-prisoners approach, grins and says: "Give me a year."

It may sound like wishful thinking. It may be overambitious. But at least it suggests a drive to get something done. And that's what matters. Otherwise millions more children like Masezeno will see their futures permanently blighted. Millions more will die.