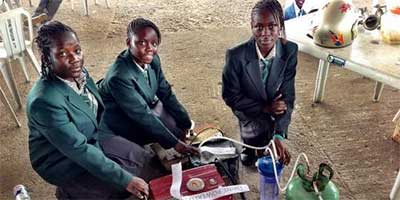 When teenager Adebola Duro-Aina read a story online during July 2012 about nine members of a family dying from a generator’s carbon monoxide fumes, she says she thought about what she could do to provide a safer energy alternative.

"I was sad about how people died while trying to provide electricity for themselves, trying to make their living better," Adebola says from the chemistry laboratory of Doregos Private Academy, a junior and senior secondary school in Lagos, a city on Nigeria’s southwestern coast.

On the wall beside the blackboard reads a quote from Charles Darwin: "Intelligence is based on how efficient a species became at doing the things they need to survive."

Adebola says that when the next academic year began during September 2012, she enlisted three friends, Oluwatoyin Faleke, Eniola Bello and Abiola Akindele, all students between 14 and 15 years old in her science class. They decided to design a generator that ran off an alternative fuel that wouldn’t harm users.

With the help of their teachers, the girls worked on the project after school for months, Adebola says. They finished constructing a urine-powered generator in time for the Maker Faire Africa, an annual pan-African conference of handicrafters, which took place in Lagos during November 2012.

The after-school project sparked interest nationally and internationally after its exhibit.

Only 50 percent of Nigerians had access to electricity during 2009, according to the U.S. Energy Information Administration, an independent statistics and analysis group. This left approximately 76 million people without electricity.

There were power outages for about 46 days per year, lasting on average almost six hours, during 2007 and 2008, according to the World Bank.

Adebola and her friends wanted to manufacture a generator that would use alternative energy sources, she says.

"We asked, what could be an alternative to our carbon-based fuels, which produce carbon monoxide?” Adebola says. “We also have the issue of fuel scarcity in Nigeria from time to time, so even the fuel is not so available.”

Oluwatoyin says that her family uses four fuel-powered generators in her house, two large ones and two small ones, to power their different appliances.

“The big one is for washing machine and for bigger appliances in the house,” she says. “Meanwhile, the small ones are for small things like fan and TV. We use a lot of fuel in my house.”

She says that fuel limitations present a challenge.

“There is an allocation for each day,” she says. “If you finish it, that's all."

Eniola says she and her friends spoke with their teachers and reviewed materials for the generator’s design.

"We were excited when Adebola spoke about this,” Eniola says.

They consulted Oluseyi Lawal, the school’s head of science.

“Mr. Lawal helped us to think through various alternatives and also assisted with the research," Eniola says.

“[Electrolysis] has to do with how molecules are broken down to smaller parts by using an electric current,” Iloba says, beaming. “They wanted to know if it was possible to generate electricity from other sources that would not release carbon monoxide. I told them that it was a good thing that they were thinking, putting what they learned in class into practice. I was encouraged when I saw this."

The four girls brainstormed alternatives to carbon-based fuels, such as petrol or diesel, for generating power, Adebola says. They came up with water, brine solution and urine, which all release hydrogen through electrolysis.

The girls considered the differences among water, brine solution and urine and looked at the effects of electrolysis with each.

Oluwatoyin says that they made an electrolytic cell, which breaks up chemical compounds using energy from a dead car battery that they found in a refuse dump.

Oluwatoyin explains what happens to the urine after electrolysis.

“The urine undergoes electrolysis, and it releases hydrogen, oxygen and gas,” Oluwatoyin says. “These gases go through the water filter, which removes the impurities from the gases. Then, these gases can be stored in the gas cylinder.”

The gases then go through a solution of borax, a white crystalline compound of hydrated sodium borate, which acts as a drying agent for the gases.

“Then the dried gas moves into the generator,” Oluwatoyin says. “There is a one-way valve, which stops the gases from backfiring into the cell, which may cause an explosion."

The one-way valve was not part of the initial plan, Adebola says.

"The first one that we did actually exploded because the gas backfired,” Adebola says. “The hydrogen gas was supposed to go in a one-way direction, so this led to the explosion in the electrolytic cell. So our teacher, Mr. Lawal, told us that we had to insert a one-way valve. So we got that from a bicycle tire so that the gas can only go in one-way direction."

Finally, they had a working generator.

The four girls are also members of the Junior Engineers, Technicians and Scientists Club, or JETS Club, at their school.

"As members of the JETS Club, we are encouraged to think of solutions to our environmental challenges in the society,” Eniola says. “When the project was almost done, we brought it before the JETS."

Omotola Adewale, a member of the club, says he supported the girls.

"I gave them encouragement and moral support,” he says. “I also donated urine."

"This would be a cheap solution to our power challenge,” Okafor says. “It is interesting to see young girls come up with solutions to problems that we face as a nation. What makes this thrilling is that they are not some big scientists or professors at some university. I guess that's why so many people are interested in it."

The exhibition gave the girls an opportunity to showcase their work to the world, Iloba says.

"This is the first time an idea is moving beyond the school,” Iloba says.

He is hopeful that the students will find success because of the novelty behind the idea.

"This idea is also innovative,” he says. “People have powered generator[s] with water but never with urine.  We are optimistic."

Jennifer Onyejekwe says that the power in her part of Lagos, Ogba, has greatly improved recently.

"The power got better around late October, early November,” she says. “That was the time food stopped spoiling in the fridge.”

She says they used to need more petrol, which was expensive.

Electricity power generation and management reached an all-time peak at the end of last year, according to Federal Ministry of Power’s December 2012 report.

"This is a significant achievement in the nation’s history of power generation,” according to the report.

Onyejekwe says that although power is better, it is still irregular.

"Light is still sporadic.”  “You can never be sure. If today is a good day, you see it and you are happy. When you don't see it, you continue business as usual. Put on your generator."

Adebola says that it’s important for the urine-powered generator to get to the community.

The girls say the generator is affordable and safe.

But Idowu P. Farai, a physics professor at the University of Ibadan, doubts whether this generator can be mass-produced.

“If the prototype works, I don't see it going beyond being a demonstration piece, just to show that it can be done,” he wrote in an email.

It may take a while before the invention is ready for the masses.

“It may take several years to have an acceptable product,” Farai wrote. “Every invention goes through processes of refinement until it gets to an acceptable level, economically, socially and environmentally.”

Moreover, electricity is not supposed to be generated at the household level, Farai wrote. Generators are unsustainable economically. Nigerians resort to generators because the power supplied by the government is unreliable.

“It can never be economically wise,” he wrote. “It is when national projects fail that you start thinking of solar electricity, urine and poo-poo electricity.”

Farai affirms that hydrogen is a highly combustible gas and a good fuel source, but he questions whether the urine-powered generator will progress further.

“The fundamental issue here is, is this urine generator project worth it beyond being a laboratory piece to demonstrate that gas in urine can be retrieved with the well known process of electrolysis?” he wrote

“They are not sustainable,” he wrote. “They can never replace electricity from the national grid (thousands of megawatts) if the masses are your concern.”

Nigeria has vast natural gas, coal and renewable energy resources that could be used for domestic electricity generation, according to the U.S. Energy Information Administration. But the country lacks policies to develop new and improve current electricity infrastructure and harness resources.

Farai explained that alternative generators face competition from cheaper, more compact, mass-produced petrol engine generators from China. The smallest cost around 15,000 naira ($95). On the other hand, he estimates that a compact, durable urine-powered generator would cost more than 100,000 naira ($635).

But Oluwatoyin estimates the production price for the urine-powered generator to be lower.

"Excluding the generator, the materials used cost 3,000 naira,” she says, the equivalent of $20. “One liter of urine powers for six hours. Our urine-powered generator is affordable, as most of the materials used were from local markets, and they are cheap."

Eniola says that the urine-powered generator is also healthier and more environmentally friendly.

"The exhaust gases from the carbon-based generator is dangerous and causes deaths,” she says. “It is also dangerous to the ozone layer. Our urine-powered generator produces water vapor, which is not harmful at all to any living thing."

The girls are seeking partnerships to take the idea beyond them while they work to improve it.

"We are looking at patenting the idea,” Iloba says. “This generator here is a prototype. We are working at compacting it in one device so that it is portable."

He says that mass production would require partnerships with multiple organizations.

"We will need a plastic company,” Iloba says. “We will need a company that fabricates generators. We need organizations to come in so that the idea is financed and see where it goes from there."

At the time of interview, no companies were in partnership with the girls to mass-produce the urine-powered generator.

Onyejekwe says that she would use a urine-powered generator if the packaging and pricing were right.

"If the packaging is right, if it is affordable, why not?" she asks.