Malawi: Demonstrations, Women and Poverty - Report from the Ground 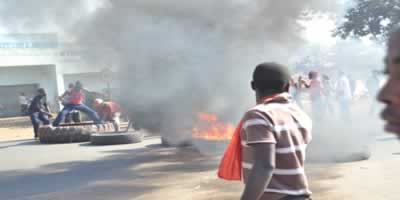 "By reaching a woman we are reaching a nation, because we know the big role the women are playing in the society."

Can you describe the situation on Wednesday and Thursday, from what you have seen in Karonga?

The situation in Karonga, on Wednesday - people were ready to show their anger towards the current government. 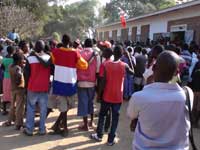 People gathered in numbers to demonstrate, especially the youth. They started from Karonga roundabout, up to the Office of the District Commissioner (DC).

Many people put on red clothes to show their anger. When they reached the DC's office they presented a petition which laid out the problems people are facing. The DC was asked to present the petition to the office of the President and Cabinet.

Problems such as lack of fuel, lack of medicines, heavy taxes, and other issues which affect the poor in Malawi.

After the presentation, that’s when the people started vandalising the shops which was no good at all but people were angry.

What have you heard about the situation elsewhere in Malawi – yesterday and today - from the radio and your friends etc?

It seems that today (Thursday) the people are still angry in some parts of the country, despite the fact that there is a call from the Civil Society Organisation calling for peace.

In Mzuzu, the situation has improved. There were nine people shot dead on yesterday (Wednesday) by the Police, according to Zodiac Broadcasting.

As for Lilongwe, the security is really tight.  In some areas such as Nchesi and other places where people are still blocking the road.

As I am talking, my friend just phoned me and informed me that in every street army officers are going to their homes and instructing them not to go out.

In Blanyre the streets are very quiet and the same in Zomba - only soldiers are moving.  But people are still wanting to express their anger.

What are people angry about? And what do you think has brought Malawi to this point? Do they have clear demands as yet? Are they angry with the British Government for withdrawing aid?

There are just so many issues which made Malawians behave so badly.

The first issue is about fuel shortage. Our filling stations have been dry for so long and, wherever there is fuel, people have to sleep in the queue or even quarrel over it.

In the hospitals the poor people are struggling to get medicines.

Forex (currency exchange) is also a problem, in that is not easy for us to buy things outside Malawi.

The other issue is the withdrawal of the UK in supporting Malawi, as well as the UK Envoy being chased out of Malawi. As Malawians, we do not support this.

There is no differences between Government issues and Political Party Issues.

The other thing is the heavy taxes which are imposed, due to a zero deficit budget. There is also a lack of respect to human rights issues, as well as some tampering with our Constitution.

They need need the president to come up with solutions regarding the scarcity of fuel, lack of foreign currency, lack of medicines in the hospital, lack of respect for human rights issues, tampering with the constitution in favour of the ruling party, academic freedom.

There are just so many issues.

The demonstrations were patronised by many.

There were many youth, both men and women.

There were leaders of various NGO's, and religious leaders.

I can just say that many Malawians were involved.  Some decided not to go on the streets but they dressed up in red attire as a way of expressing their dissatisfaction with the present situation.

The women really patronised the protests, as you can see from the photographs.

The Vice President (Joyce Banda) told the Malawians that she is supporting the demonstrations. She really urged the Malawians to support the marches, since that is the only way they can show their concern.

So women were in the forefront.

Let me make it clear that the demonstrations were meant for peace but, because the police started beating people the whole demo in all parts turned violent.

If the police had been cooperative, people wouldn't have turned violent - which means our police really need to be transformed.

From your experience, working with your grassroots organisation, SURCOD, how are these problems - shortages etc - affecting women and children in Malawi in their day-to-day lives, especially the widows and orphans in the rural areas?

We aim to empower the capacity of the poor, especially the poorest of the poor.

To help people who are in the vicious circle of poverty, to graduate from this stage into another stage.

To help them to meet their basic needs, so they can sustain themselves and live as happy people throughout the year.

If these people are affected so much by the zero deficit budget, which increases the burden of tax on them, how can they move on from this stage?

How can these people graduate from this stage when there are no free medicines in the hospitals?

How can they move forwards from this stage when reputable donors such as the DFID (Department for International Development) are withdrawing their support from the country?

We should not forget that the woman is always the victim of this.

This is why, as SURCOD, we are working with the women to empower them in entrepreneurship skills through savings so that they can lead an independent life. But how can we achieve this if there are no donors to support us?

Most of the small businesses we are encouraging in the communities are done by the women of which some of them are widows.

With the increase in government revenue, their profit is being consumed in the name of tax which is very bad.

If you look at a woman whose five young children are depending on her for their education, food and clothing - if such a woman cannot make an income, then how can she meet her basic needs?

Do you see a solution to the present situation in Malawi? Is there anything that the international community do to help Malawians in general and also to help women and children at a local level?

The first solution is for the president to accept the problem and offer the chance for dialogue with the Civil Organisation and the Opposition. He needs to take a collaborative approach of dealing with the problems. 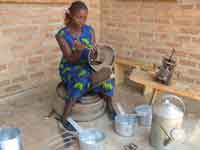 If this fails, then the international community should intervene.

The other way is to increase support for grassroots organisations such as SURCOD and others, so that the poor women should be in the position to be assisted through their intervention as such organisations work directly with the poor communities.

As in the case of the withdrawal of support by the DFID, it is very important that they look at initiating other ways of working with grassroots organisations such as SURCOD.

Most of the unskilled labours are getting less than $50 a month and most of the women we are working with are not doing paid work at all.

They are just minor farmers and, for most of them, to get even $1 is a very big problem.

Some are widows with extended families and some are living Positively with HIV. You can imagine how poor such a woman is.  It is very important to assist them.

Its not just a matter of assisting with daily needs.

To change a life for the better, to build capacity and earn an income can be a very strong tool to poverty eradication and empowerment in the poor families.

By reaching a woman we are reaching a nation, because we know the big role that women are playing in the society.

Friday, 22nd July. UPDATE: The death toll due to the demonstrations has risen to 18.

Sisters claim they were shot at home by Malawi police