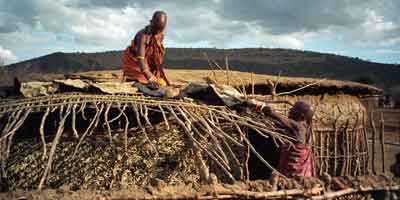 Tens of thousands of people watched as President Mwai Kibaki signed the document into law at a large ceremony in the capital, Nairobi.

"The message we're giving to the world by having heads of state from the region… is that Kenya is at peace with its neighbours," Kenya's Foreign Minister Moses Wetengula told the BBC's Focus on Africa programme.

Some have billed the new constitution as the most important political event in Kenya's history since it gained independence from Britain in 1963.

However, customs and practices still hold women back. Women are discriminated against in several areas that include land and property rights. The society positions men as the sole property owners.

The customary laws of some ethnic groups demand that land and other property that a woman acquires before or during the marriage belongs to her husband, who can sell it without her consent.

The issue of 'wife inheritance' still occurs, where widows are forced to marry again. It is still being practised, especially in western Kenya. If a woman declines to 'be inherited' and she succeeds, she is often under constant pressure to sell the property at discounted prices.

In Kenya, many women lose their rights to property after divorce or the death of a spouse. According to human rights experts, women’s socially sanctioned dependence on men leaves them vulnerable to 'cultural traditions' that do not recognise women’s ownership of land and other property.

Kenya’s revised constitution represents gains for the women of Kenya. Section 40 of the Kenyan constitution promises the right to own property to 'every person', while section 60 ensures 'equitable access to land' and 'security of land rights' but without mentioning women or acknowledging their historical landlessness.

However, according to Human Rights Watch, customary laws in sub-Saharan Africa have greater influence than civil law when it comes to women’s property rights. And, according to a report entitled 'The National Land Policy: Critical Gender Issues and Policy Statement', only five percent of women in Kenya own land.

Gender and human rights advocates believe that if women enjoyed equal property rights they could change the social landscape for the better.