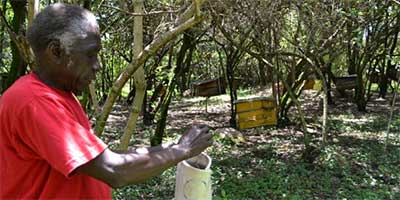 In the silence of the night, Isaiah Manonka Marwa walks quietly to a bush within Kumatutura village, in Kuria West, Migori County.

The former tobacco farmer is dressed for the occasion; a white apron, a netted cap, and gloves, ready to collect a bee colony he has trapped in a box he calls a ‘catch box’.

“This is my new livelihood,” says the father of six as he walks back home with his catch wrapped in a piece of cloth. Tonight, he is going to increase the stock of his beehives by refilling one more hive. It also gives him an assurance of earning an extra $100 by the end of every four months.

Marwa is among more than 1000 farmers in Kuria West who have abandoned tobacco farming, citing health and environmental reasons.

“Anybody who saw Kuria West some 10 years ago can attest to this,” says Marwa. “The area had thick bushes that harboured different animals and birds. That is no more. We have ‘killed’ our own environment in the name of making money from tobacco.”

On average, tobacco farmers earn $1000 per hectare in ten months.  But According to the residents, one must put aside some extra cash for medication, and at the same time sacrifice several trees to cure the leaves.

To cure tobacco from one hectare of land, says Marwa, requires at least six metric tonnes of firewood. Yet that is detrimental to the environment and the entire ecosystem: “We have cut down all the trees to a point that we now have to outsource the firewood from neighbouring communities”.

No dignity in Tobacco farming

Ruth Onyancha, a mother of three from Gwikonge village further says that there is no dignity in tobacco farming. “We all know that tobacco is not food. Yet women and children keep toiling on tobacco farms knowing very well that they are tending a killer crop. A crop, which will eventually cause cancer, that will kill someone’s son.”

According to Pastor Rodgers Maintaria from Komonange village within the area, tobacco farming also has health consequences for local women who work on the farms. “I have seen my wife and children fall sick after weeding or harvesting tobacco. Yet this is a common problem among all tobacco farmers, particularly women, in this area,” he said.

Moses Makokha, a clinical officer at Alupe level five Hospital in Busia County says that the most common disorder associated with tobacco farming is a disease called the Green Tobacco Sickness. “The disease is caused by acute nicotine poisoning due to nicotine absorption through the skin, and is characterised by headache, dizziness, nausea, and vomiting,” said the clinical officer.

The Centre for Disease Control (CDC) further reports that Green Tobacco Sickness can lead to fluctuations in blood pressure or heart rate, saying that it is a severe occupational health hazard among tobacco farmers worldwide.

But now, several farmers in Kuria West have abandoned the long-time cash crop and taken up bee farming instead.

They have organised themselves into 57 self-help groups, forming a community-based organisation known as Gusola, which means ‘bring closer’ in the Kuria language. The group brings together farmers from Gukiharaka, Bukira South and Bukira Central Sub-locations, all of them found in Kehancha District.

One of the beliefs is that in order to keep bees, one must have some bush, since they do not have professionally-made apiaries. Keeping natural bush means restoring the tree cover previously lost to farming.

“On my farm, I have 30 beehives,” said Marwa. Each hive can potentially produce 10 kilograms of honey per harvest, which fetches $100 from the local market. That means that from a small bushy portion, Marwa can pocket up to $3,000 every four months.

To earn the same amount from tobacco farming would have meant a land commitment of at least three hectares, and a wait of 10 months rather than three.

This effort is strongly supported by ActionAid International Kenya, which has begun introducing the communities to modern Langstroth-style hives to supplement the ones they already have.

“We are working on a program that will see them start packaging and labelling the honey for the market,” said Samson Michura, who manages AAIK’s Kuria Local Rights Programme.