Patricia Nafuna - From Victim to Advocate for Kenya's Women & Girls 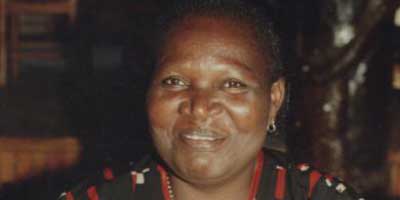 She helped sustain her family economically and emotionally, and eventually left her abusive husband to start her own a community-based organisation, Initiative in Poverty Eradication, Aids Control and Food Security Movement (IPEFAM), so that women and girls would learn how to take care of themselves through community development, life skills training, and education for girls.

Patricia's story is one of intense determination to help others through years of abuse, and beyond.

Patricia is my nickname.

I am 56 years of age, and  a mother of five: four daughters and one son.

I was born in a small village situated in Kakamega town, in the western part of Kenya. I am the first-born in my family of seven, three brothers, two sisters –  and both parents alive.

After my primary education, it was not easy for me to enter high school.

My stepmother told my father not to educate me because I was a girl.

My mother is the first wife. My paternal uncle, who was a teacher, insisted for me to continue.

He told my dad to continue taking me to school. During my high school education, I was inspired to become a nurse when I visited my cousin, who was a nurse in a certain hospital, in Nyanza.

In 1975, after completion of high school, I did not join the nurse training immediately, but I was employed by teachers service commission of Kenya as an untrained primary school teacher for two  years.

During this time my income was very little: ksh.600 per month only.

My husband was working in Nairobi –  about 400 kms away from home. The school where I was teaching at – he could come and take all the money I had earned each month.

He would leave me with ksh.200 only when going back to the city. I was staying with two children. I found the situation too hard.

In 1980, I joined nurse training at The Nairobi hospital to train as a registered nurse.

Domestic violence started with beatings, slaps, or scoldings every morning or evening.

The cause of this could be having asked for financial assistance for the following fare, breakfast, lunch, dinner or any other.

This made work very hard, in getting my own salary for sustainability in the future.

At that time, I did not understand our culture, my rights and what was expected of me in my married life.

After completing the nursing training, I was employed by a local hospital as a community nurse tutor in 1984. One and half years later, I went to a college to learn obstetrics; I was back in Nairobi with him, then again he resumed his beatings.

By 1989, I had had five children with him, but my frustration intensified. In 1991, there was a job opportunity in the western province, but he didnot want me to pick the job because the position was higher than his.

He claimed other men would be attracted to me.

Marie Stopes International had given me a car to facilitate my work. He kept on tracking me wherever I went for fieldwork to see if he would catch me with another man. He threatened to kill me about three times.

He told me I must leave work –  from which I resigned in February 1992,  to see whether he could care for us as he claimed.

On 15th August, 1992, 14 thugs came to our home at night wanting to kill me with my children, but they were not able to enter the compound because I had kept ten dogs that fought tirelessly till 3 am, and the thugs went away.

The following day, my husband came from Nairobi and he retorted they were my men friends.

Left at home with the children

I was unemployed for seven months; he kept away this period.

I used all the money I had saved to support my five children, househelp, two gardeners, and myself.

In September, 1992 I had no soap, no food, and we were hungry for one week. This forced me to go back to my former employer a local hospital where I worked as a nurse tutor to seek for a job. I was told to report the following day.

Choosing between husband or work

When my husband heard that I had been employed, he came back in December from Nairobi. After arriving, he told me to choose either to leave job and stay with him, or the take the job and we separate.

I kept quiet, but in my heart, I was preparing myself on how I was going to stay alone with the five children at rental premises, which required more expenditure. He went back to Nairobi.

In mid January 1993, he came back claiming he was on leave.

I opened my private medical clinic as a private nurse practitioner near home, although  I was still working at the hospital.

This did not solve the problem.

I could go on duty during weekdays, but evenings or on weekends, I could work at my clinic. This clinic was located at the outskirts of Kakamega town. About 200 meters I had bought a plot where I was planning to build my own premises for the clinic.

On 19th  February, 1993, at 2 pm he came to the clinic and told me that he had been called at his place of work in Nairobi and that I should go and pack up his bags. I told him the house-help would pack up for him, but he refused.

I had patients to see in the afternoon, but he didn’t  want to hear. He took all the money I had collected on that day.

When we reached home, he locked up the gate and the house. We went to the bedroom; hethrew blows at me on the head, kicks in the abdomen until I started bleeding in the face, both of my eyes and lips. My lips swelled and I could not hear.

When I started reciting the Lord’s Prayer is when he stopped beating me up.

I went back to the clinic using a public vehicle because the house was just beside the road.

That evening, by coincidence, my brother who was working at the provincial hospital came and took me to the hospital.

After sick-leave, I could not hear, so it forced me to take indefinite unpaid leave. I never went back to him. I resumed hearing after six months.

He sold my plot of land that I had bought.

Why do you want to share your personal experience of domestic violence with the world?

I might get a development partner who might build my capacity, including IPEFAM (Initiative in Poverty Eradication, Aids Control and Food Security Movement) as an organization to grow in its status, leading to a living legacy.

I want people to know that at the grassroots, women suffer without help, even if they are educated. One [woman] told me she did not know that husbands could violate even educated women’s rights.

I realized sinking into depression would make me leave my children unattended, leading to lack of education, early marriages, pregnancy or sexually transmitted infections.

Did you have no one to turn to? No family member or justice system?

I have family members who could sometimes assist me with little money for my upkeeping.

Justice systems exist, but one needs a lot of money to be assisted. Whenever I was beaten, I reported to the police, but they said I should not take my husband to court. I did not have enough money to enable the matter to court.

My family feared helping me, i.e. caring for my five children and me, which was a heavy burden to anyone else.

At this time, my priority was to feed the children with the little money I had, instead of paying for photocopies of  police P3  forms , court papers, and documents that might not have yielded any results to assist me or the children.