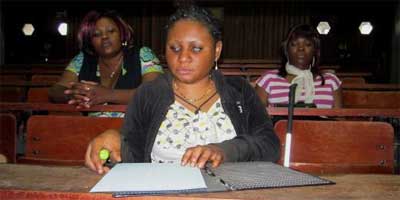 There are as many as 100,000 visually impaired people in Cameroon, but just one government school for the visually impaired. Most blind students struggle to afford their education. And girls with visual disabilities face special challenges around education and sexual health.

BUEA, CAMEROON – Kate Ule Elangwe sits peeling melon in front of her door on Street One with a mobility cane in between her legs. The sound of music emanates from inside her room, a track by a Cameroonian musician titled “Help Me When I Am Still Alive” in French.

Street One, one of the eight streets that make up the village of Great Soppo in Buea, capital of Cameroon’s Southwest region, has an uneven, unforgiving surface where anyone could easily trip. But Elangwe, a 23-year-old blind student at the University of Buea, has been living alone on Street One for the past eight years.

Elangwe was born with her vision in the Southwest region of Cameroon.

Soon after that, her mother abandoned the family.

“A few days after I became blind, my mother ran away from her matrimonial home to an unknown destination, leaving me alone with my father,” she says, her voice breaking.

Her father then left his job as a company driver to take care of her. She says he did all he could to make sure she was happy, despite his pain from their new family difficulties.

“I remember a day when my dad took me to the hospital to see a doctor,” Elangwe says. “I wasn’t sick on that particular day. When we entered the doctor’s office, my dad told the doctor to take off one of his eyes and give me so that we can both use one eye each to see.”

A tear runs down her cheek.

“Doctors told my dad that it was impossible, and dad was very disappointed,” she says.

One year after Elangwe lost her sight, her father sent her to the St. Joseph’s Children and Adult Home, a rehabilitation center for the blind in Bafut in the Northwest region.

“The same year I was enrolled in SAJOCAH, my dad died,” she says. “My life story changed again, this time from hope to hopelessness.”

Elangwe says the school allowed her to stay for an additional year because of her father’s death, but she had to return home two years later when she could no longer afford the fees.

After her father’s death, her aunt, Pauline Mukete, took over caring for her. Her aunt, who has a blind daugher of her own, couldn’t afford to send Elangwe to school but tried to educate her as best as she could.

“In fact, she is the one who taught me everything that I am able to do today,” Elangwe says. “If I have been living alone for the past eight years that I have been a student in Buea, it is thanks to my aunt.”

Elangwe lived in her aunt’s home in Mutenge, seven kilometers from Buea, for six years without attending school, but she never gave up hope of continuing her studies.

One day, Franciscka Eyong, an old friend of her father’s,  offered to sponsor her education, this time at the Buea Rehabilitation Institute for the Blind, where she passed her exams to enter secondary school. Eyong paid her school fees in secondary school and rented her a room, the same room where Elangwe still lives today.

Elangwe finished secondary school, but then she says sadness entered her life again.

“Madam Franciscka Eyong died when I passed to go to form three,” she says. “I knew my education had ended.”

She secured a two-year girls scholarship from the University of Buea to attend a private secondary school before she was again left wondering how to pay for form five, a crucial class where students write the General Certificate of Education to enter high school, the next phase in the Cameroonian education system.

Together with visually impaired friends from the Rehabilitation Institute for the Blind, Elangwe attended a service at a Presbyterian church to beg for support. The congregation paid part of her school fees, but Elangwe says the secondary school eventually asked her to leave because she owed fees.

“I was going home crying when a male voice stopped me on the way, asking me why I was crying,” she says.

Elangwe says the man asked how much she owed, then immediately gave her money to register for her exams with an extra 10,000 francs ($20) to pay her fees.

“Before I could sing a thank you again to this strange man, I could hear his footsteps leaving my presence,” she says. “I then realized he was my guardian angel, yes he was.”

Elangwe passed the exam and began looking ahead to high school when the stranger, Jacob Waah, a Cameroonian who lives in the United States, visited her again during a trip home.

“He told his wife about me,” she says. “The both of them ever since have been acting like my parents. They have been wonderful.”

With only one government school for the blind in Cameroon, blind students struggle to afford education. Girls face additional challenges to attaining education, such as learning how to manage their menstrual cycles. Advocates for the blind ask for scholarships and support to promote education for visually impaired girls, though they acknowledge that the government is doing all it can afford right now.

Patrick Nsuh, national vice president of the Cameroon National Association for the Blind, estimates that there are between 60,000 and 100,000 visually impaired people in the country. Measles is one cause of blindness, but Nsuh says that the greatest number of blind people in Cameroon live in the three northern regions, where the major cause is onchocerciasis, or river blindness, a parasitic disease.

The Rehabilitation Institute for the Blind in Buea is the lone government Institution in Cameroon that takes care of the blind. With an enrollment of 35, it’s a boarding institution split into two sections: the primary section that prepares the children for the First School Leaving Certificate and the professional section that teaches handicrafts to the visually impaired.

Fomenky Nicodemus, the institute’s director of rehabilitation, says that the government subsidizes the fees.

The school also provides some supplies.

“When the students enroll, we give them their writing frame and stylus,” he says. “What we don’t give them is the mobility cane. Their families have to provide this for them.”

“It has not been an easy road for me and my family,” she says. “But I have had all the support from my siblings.”

Ebob’s parents put her through school at the Rehabilitation Institute for the Blind, but her education stopped there because she couldn’t pass the exam to attain her General Certificate of Education.

“I have written the GCE Ordinary Levels now for six years without passing,” she says. “It is becoming difficult for me because I am developing hearing problems. One of my ears can’t hear a thing, so I find it difficult to listen to lectures.”

Jena says that blind students need more than what they are offered.

“Some drop out of school due to poverty,” she says. “There should be something like a scholarship scheme for the blind children whose families are not viable financially. This will help them advance in their education.”

Jena says blind girls face a specific set of challenges and need help in the form of teaching, counseling and psycho-social support.

Nicodemus says the school has dedicated instructors who teach the pupils how to run their lives, especially the female pupils. He says blindness is more challenging for females because of their biology and they must receive education on how to anticipate and manage their monthly period. It is not easy, he says, but his staff is doing its best.

Nicodemus says he wishes the government would open more institutions for the blind so that more blind children could attend school.

“It is difficult for blind children whose families live below the poverty line to send their children to school, especially when the school is far off from their hometown,” he says. “Private institutions are very expensive. All these limit the chances of blind children to attend school.”

But he adds that the government is doing all it can right now to meet the needs of the blind in Cameroon through subsidized education.

Attempts to reach the Ministry of Social Affairs, which is responsible for issues concerning citizens with disabilities, in Yaoundé, the capital, were unsuccessful.

Elangwe says she is proud to be blind because she can do everything that people with two eyes can do. But her last year of school will be a challenge.

“Mr. Waah called me a few days ago that he has lost his job and that things are difficult for him right now in the USA,” Elangwe says sadly. “I don’t know how I am going to pay my rents, my fees, feeding and everything.”

Elangwe says she wishes to attain the highest level of education that she can afford in order to become a guidance counselor.

“I have gone to school,” she says. “I am in the university. I live alone in my rented room and take care of myself. I wash my dresses and cook my own food. I leave my house alone and come back alone. I think I deserve to be a happy blind girl.”

Elangwe calls on other young visually impaired girls to take control of their lives.

“Blind girls should learn from my story and fight to be what they dream to become,” she says.