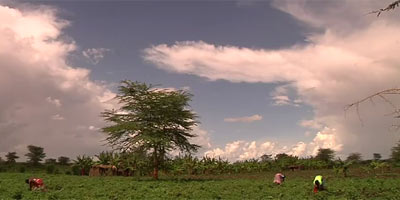 Ensuring the full equality of women and girls will make a significant contribution to reducing hunger and malnutrition in Africa according to a new report released by the United Nations Development Programme (UNDP).

Entitled, "Towards a Food Secure Future", the report says that one way "to advance nutrition and break the inter-generational cycle of malnutrition is to empower women by strengthening girls' and women's rights and increasing their voice in political and social matters".

Improvements in education for women from 1970-1995 have cut child malnutrition "considerably", says the report. It cites a 2008 special issue of the medical journal, The Lancet, which found that direct interventions delivered to pregnant women and children in their first two years of life could eliminate 90 percent of the global burden of stunting in 36 countries, most of which were in sub-Saharan Africa.

The Lancet study found that scaling up these interventions could prevent one-in-four deaths of children under five. The cost to do so in those African countries that were part of the sample was estimated at U.S.$2.8 billion annually. As a comparison, in 2011, the United States was spending some $8 billion a month on the war in Afghanistan.

The UNDP report says that secure, predictable access to land is essential for food security, but that women and poor people are "most at risk of forfeiting their land rights".

Men represent 85 percent of agricultural landholders in sub-Saharan Africa. The 15 percent owned by women "masks a wide variation between countries", says the report. In Ghana, Madagascar and Nigeria, men own more than twice the units of livestock than women own. Similar gaps exist when it comes to gaining access to fertilizer, mechanical equipment, new technologies, extension services and credit.

The report also cites studies that show that women fare much worse than men in times of crisis. Women are often the "shock-absorbers" of household food security - skipping meals to make more food available to other household members.

In order to be able to feed their citizens in the years ahead, the UNDP says that African governments must choose policies that combine technological innovations in sustainable agriculture as well as measures to reduce population growth. It adds that empowering women and expanding their access to education and earnings are critical for lowering fertility rates.

A survey of experiences across African countries shows that female farmers have lower productivity levels - in Nigeria the gap was 40 percent. But the studies also showed that if women had the same education, experience and farm inputs as the average male farmer, women's productivity would catch up to - and in some cases surpass - that of men.

The report argues that there is "plenty of evidence" showing that "empowering women is a highly efficient way to achieve progress across the multiple dimensions of food security". But, it adds that irrespective of the gains that come from allowing women to engage in agriculture as equals, "women's empowerment must remain a central policy priority simply because equality and nondiscrimination are of intrinsic value".

Quoting the Kenyan environmentalist, women's rights advocate and Nobel laureate, Wangari Mathaai, the report says, "African women in general need to know that it's ok for them to be the way they are - to see the way they are as a strength, and to be liberated from fear and from silence."