Africa: Sold into a life of despair 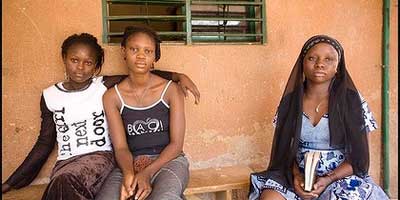 Africa: Sold into a life of despair

I had arrived in Burkina Faso to investigate a human trafficking problem escalating into one of the worst in Africa.

A London-based organisation had tipped me off that criminal gangs - mostly Nigerian - were targeting Burkina Faso in order to circumvent tightened border controls elsewhere.

LATE Friday night on the outskirts of Ouagadougou in Burkina Faso.

As we enter the village of Samghandi our taxi's headlights cast beams of light onto swarms of mosquitoes and figures standing at the roadside.

The car comes to a halt outside a neon-lit bar and Patrick Baudin gets out to meet our contact.

The men shake hands and Baudin, a Christian pastor originally from the Ivory Coast, summons us to follow him with a nod of his head.

''We should be quick,'' he says over thumping dance music as we walk into the venue. Inside, there are mirrors on the walls, and a green light throws a strange hue across a dance floor where young girls dance and wait tables, watched by men drinking beer.

We sit in a corner and some of the girls join us. All hail from either Nigeria or Burkina Faso.

Some have braided hair and nearly all wear miniskirts and tight vests; they could be out clubbing at the weekend in any town or city. But the girls are not here of their own free will. Victims of people traffickers, they are forced to sell their bodies for sex in the club's filthy back rooms.

Some look barely 14 years old. One cradles an infant in her arms.

''Where do you come from and how old are you?'' Baudin asks her. ''I am from Lagos [Nigeria]. I am 22 years old,'' she replies. Even in black eyeliner and garish red lipstick, the girl looks barely 18. The others lie about their ages, too. One, a slim girl to my left wearing a turquoise top, says she is 22. She leans forward as if to speak but checks herself and stops. She seems nervous and glances around the club before moving closer again. ''We were brought here last week. They took our clothes, money, papers and mobile phones,'' she whispers. The girl says her name is Shakira. Her friend, Magali, has been crying. ''They said they would beat us if we did not work,'' she says.

Working girl Juliette at Mercy's (Mercy is in the background). Photo: Angela CatlinThe disco music is cranked up. Across the room from us a group of men is gathering. We decide to leave. Some of the girls, including Shakira and Magali, follow. As we walk towards our car, the men pull Baudin to the side. By now, a crowd has formed and threatening voices are raised above the music.

''What do you want here?'' says a scrawny man with high cheekbones.

Baudin ignores him and keeps walking, placing his arms protectively around the girls' shoulders. He quickens his pace and ushers Shakira and Magali towards the taxi.

Magali dives into the front passenger seat and Shakira throws herself into the back and we quickly follow. Baudin orders the driver to go but as he tries to shut the door a crowd surrounds the car. ''On y va! On y va! (Let's go! Let's go!),'' Baudin yells as we attempt a frantic escape.

I had arrived in Burkina Faso a week earlier to investigate a human trafficking problem escalating into one of the worst in Africa. A former protectorate of France, having gained independence in 1960, Burkina Faso is a landlocked country surrounded by Mali, Niger, Benin, Togo, Ghana and the Ivory Coast. London-based organisation AFRUCA (Africans Unite Against Child Abuse) had tipped me off that criminal gangs - mostly Nigerian - were targeting Burkina Faso in order to circumvent tightened border controls elsewhere.

Baudin despairs at the misery here. A streetwise pastor, much of his time is spent helping girls forced into prostitution. He says the authorities are ill-equipped to combat the crime. Often he feels he is whistling in the wind, but he continues his crusade with the support of Christian mission organisation Serving in Mission.

Other charities including Keogo and the African Solidarity Association also warn of a crisis. And the Red Cross is embarking on a controversial initiative whereby it will pay traffickers to cease their trade. A diplomat at the Nigerian embassy in Ouagadougou says Burkina Faso has the ''worst trafficking problem in West Africa''.

Concern is increasing in Europe too over the increasing vulnerability of African girls to exploitation - particularly with several major sporting events coming up, including Euro 2012, the international soccer championship to be jointly hosted in June by Poland and Ukraine. Catherine Bearder of the European Parliament recently reported that strip clubs were already opening near the football stadiums in Kiev. And in Britain a group called the Anti-Trafficking Alliance has expressed concerns about the London Olympic Games, warning that past events have been linked with increases in trafficking, prostitution and sexual assaults. The group cited a report by Canadian anti-trafficking organisation The Future Group showing that during the 2004 Athens Olympic Games the number of trafficking victims almost doubled. 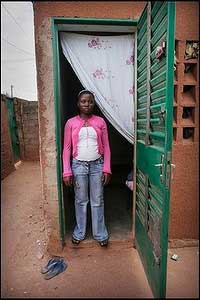 Patience was trafficked from Nigeria to Burkina Faso. Photo: Angela CatlinIn Ouagadougou, Baudin knows someone with contacts to a brothel and after a number of phone calls we are given permission to visit Mercy's Sex Shop in the Pissi district. A dingy bar at the side of a dusty road with no street lighting, it feels like the most desolate place on earth. Mercy, a fat, scowling woman from Nigeria, introduces five of her girls. The women are all Nigerian. They explain they were promised work in Europe but trafficked to Ouagadougou instead. The youngest, Patience, who claims she is 18, was brought to the city two years ago. She seems in another world, her eyes glazed over as if high, although drugs - alcohol aside - are not a major problem in the city. Discreetly, Baudin instructs Patience to call him if she wants help.

Leaving, however, is far from easy. Debts of up to 4 million West African francs ($A7800) must be paid back to brothel owners, and Baudin explains that juju (a form of witchcraft) is used by criminals to terrify their victims into silence. Girls are threatened that if they speak to the police something awful will afflict them and/or their families. The next day at Central Police HQ, Inspector Alain Kabore explains that witnesses are often too frightened to co-operate.

Another problem is corruption, which is rife in Ouagadougou. Baudin says that many police officers take bribes. In one of the bars we visit, a drunken off-duty policeman flashes his warrant card as he sits with his arm around a teenage prostitute. Baudin's claims are backed by two former traffickers. Nigerians Ebo Collins and Imo Kessi say that in previous arrests they paid bribes of up to 500,000 West African francs (CFAs) ($A955) to policemen to secure their release. With the average wage in the capital only about 30,000 CFAs ($58) a month, Kessi adds, human trafficking is an extremely lucrative business.

Baudin later expresses doubts about Collins' and Kessi's claims that they are no longer involved in the business. The 40-year-old has seen too much in his years spent campaigning on behalf of street children. He trusts few people.

At times Baudin's courage verges on the foolhardy. On several occasions he takes us to red-light zones so we can witness the scale of the problem. One night in the Dapoya area, we pass a brothel called Ali Baba's. Girls are lined up in the streets. Baudin tells the driver to stop. As the car slows, he winds down a window and summons a young girl across to him. Her name is Bola and she comes from Lagos, Nigeria, and although she claims to be 22 she looks much younger.

''I am a minister. If you give your life to Christ then we can help you. Do you want to give up this work and this life?'' Baudin asks.

Baudin alights from the car. They speak for a few minutes until a woman appears from inside the club. She is the madam. She screams in French at Baudin and some men appear from inside the bar. Baudin sprints back to us but as the driver tries to accelerate we are surrounded. The mob rocks the car and reaches in through the windows to grab at photographer Angela Catlin's camera. A door is flung open and Baudin is dragged from the back.

He is ringed by angry people shouting and gesticulating - Ali Baba's bouncers. One pulls a knife and Baudin starts talking for his life. The situation only calms after we agree to pay money for his safe release. The frightened pastor says later that the presence of two white people probably saved him. Nevertheless, two nights later Baudin rescues Shakira and Magali from the brothel at Samghandi. Posing as charity workers, we have negotiated access to the club in order to interview the girls, and although events quickly lead to another volatile situation, we drive off with Shakira and Magali safely in the car.

Magali, 15, and Shakira, 19, have been extremely fortunate. They arrived from Nigeria seven days ago, having paid money for jobs in America. But on arrival at a bus station in Ouagadougou they were abducted by traffickers. The night we encounter them was to have been their first working as prostitutes. ''They told us we must have sex with men as we owed them money. We were told we would have to pay back 1,200,000 CFAs ($2300) but we refused to do what they said so they moved us to the village and threatened to kill us if we didn't work,'' Magali says.

''They told me my new name was to be 'Shakira','' says her friend, whose real name is Jennifer. The following day, Baudin takes the girls to police headquarters where they give statements to Kabore's anti-trafficking unit.

Magali and Jennifer are now safe. A week later, police raid the Samghandi club but despite several arrests, the bar remains open and young girls are still being sold for sex.

Some names have been changed.