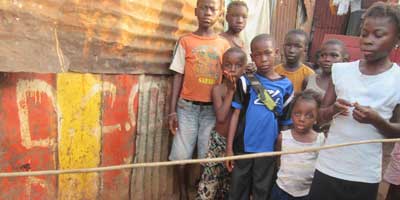 Kroo Bay has been hit hard by Ebola. Three adults died in the last week. One of the children who attends our school, Davida, is now an orphan.

Because of these deaths, several houses are under quarantine. A total of 123 people are affected, 74 adults and 49 children.

Help us feed them.

WYCF is leading an Ebola education programme with a group of 10 Community Based Organisations (CBOs) in Freetown. This trusted network of CBOs has unique access to slum communities around Freetown.

Using CBOs in the Fight against Ebola

During 2013-2014, Fight for Peace (FFP) invested a lot of time and energy in building a network of trusted Community Based Organisations (CBOs) around Freetown. They wanted these humanitarian organisations to join the FFP Global Alumni Programme, an initiative that uses mixed martial arts and boxing to draw violent young people back into employment, education or training. WYCF is part of this trusted network.

When Ebola hit Sierra Leone in May 2014, these organisations that normally work in education, health, or employability suddenly found their social objectives being undermined. School was banned. Funds dried up for non-Ebola related health interventions. Employment opportunities stagnated with the economy. Their social mission was twisted towards emergency response.

One of the World Health Organisation's (WHO) core activities for eradicating Ebola is social mobilisation. By it's very definition, this activity depends on the support of grassroots organisations, or CBOs. Over the last eight months, only two or three of the CBOs in our network have been asked for help with accessing their communities. They have, perhaps fatally, slipped through the net of the region's Ebola response strategy. With WYCF's Community Ebola Education programme, that launched on Boxing Day, we hope to reach around 5,000 people. By resourcing CBOs to go from house-to-house in their communities, we deliver a consistent message to people who may not have been trained before. And by gathering data we hope to make a case for the more effective use of CBOs in the fight against Ebola and its knock-on effects.

School construction in George Brook [A Safe Place in the Hills] is almost finished. The roof is on and the final bricks are being laid to the inside walls.

A Safe Place on Stilts [flood-proof school in Kroo Bay] will remain on hold until Kroo Bay is cleared of the risk of quarantines.

Help us care for our communities and resource other CBOs to protect theirs:

Emergency supplies for families under quarantine