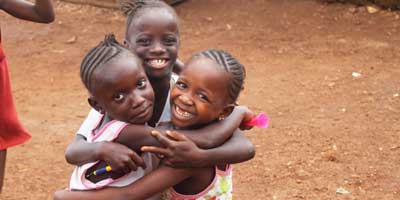 Founded in 2009, We Yone Child Foundation (WYCF) is a non-profit NGO working for the improvement of the lives of children in Sierra Leone.

WYCF is made up of a passionate team who work their hardest to offer a happy, healthy, and self-sustainable future to our children and their families.

Our number one priority is offering life-empowering opportunities through education.

Sierra Leone ranks at number 180 (Low) out of 187 countries and territories in the Human Development Index, according to the United Nations 2011 report.

An estimated 62.79% of the population lives below the international poverty line (World Bank, 2011).

High rates of infant mortality, maternal mortality, and mortality for children under five place the country amongst the poorest and least developed nations in the world.

Violence against women, sexual and gender-based violence, and gender inequality are prevalent at all levels of society in Sierra Leone. Women and children still face barriers in accessing justice because of the judicial administrative bottleneck, shortage of judicial personnel, high cost of legal fees, cultural barriers ,and the absence of courts in certain areas. The customary law has also continued to discriminate against women, particularly to ownership of productive resources, inheritance rights, and rights in marriage.

Children – girls in particular – are the most vulnerable, having to work from an early age to increase their families’ income. In many cases, they are removed from school because their families cannot afford to pay school fees along with other basic living expenses.

Typically, the people living in our target communities are facing multiple hardships in life. These factors include:

This is a buzzing slum community in Central Freetown – home to around 6,000 people.

There are two primary and junior-secondary schools in the community, one of which is assisted by WYCF.

About 5,000 people live in this beautiful hillside community.

There are now two primary schools in the community, one of which is run by WYCF.

There has been no urban planning since the area was occupied by internally displaced people, mostly from the Northern Province, during the civil war.

From the George Brook football pitch, the only way to move further up the hill is by foot through rocky paths. These are extremely dusty in the dry season and muddy and slippery during the monsoons. During the rains, all rubbish and waste gets washed to the centre of Freetown, into Kroo Bay, and into the sea.