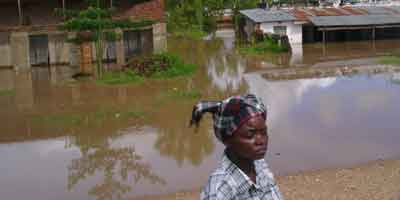 "At SURCOD, we are very concerned with the floods that occurred during the first week of April 2011, which swept away more crops – as well as more houses in Karonga District, and which affected over 5,000 families.

At SURCOD (Sustainable Rural Community Development Organisation), we are very concerned with the floods that occurred during the first week of April 2011, which swept away more crops – as well as more houses in Karonga District, and which affected over 5,000 families.

The situation worsened on the 2nd and 6th of April, wherein heavy rains caused most of the rivers to bust. Families had to camp in schools and churches.

Nature of the Damage

No death or injury was reported; food stuff and household utensils were washed away, and crops – especially maize, cassava, and rice fields, were damaged (data not yet available).

Also, two cows, three pigs, and a number of chickens were reported missing.

4270 households were affected, 421 houses collapsed, four deaths, one injury, and 224 families are camped, in schools, churches, and the health centre.

As on April 2nd, food stuff and household items were destroyed and washed away, as well –   the maize, cassava, and rice fields were     damaged (data not yet available).

Three cows, seven pigs, and a number of chickens are missing.

SURCOD assisted in an assessment conducted by the District Assembly.  This assessment was done by all stake holders at the district, because we promote working together and sharing information in terms of emergency

The Effect of Floods on Crops

People in the flooded areas mainly depend on rain-fed agriculture, supplemented by irrigation.

The three main food crops are maize, cassava, and rice (in that order), and availability of the these crops fluctuates according to the production cycle.

As a result of the floods, a significant loss in maize production in the affected areas is expected.

Impact of Floods on Schools

School-going children were not in school when the flood occurred and are still at home for holidays; they were expected to return to school on 26th April,  2011.

Since children were not in school during the flood, there was no immediate effect on schooling. However, a number of issues were identified that need to be looked into to ensure the learning environment is safe when children return to their schools. These are:

The following are the key actions that need to be undertaken in schools that were water logged to protect children from infections once they get back to schools.

The Central Market Place has stagnant, filthy, and stinky water, plus debris.

Recommendation is disinfection of the market floor with chlorine after a proper clean up and health education band/team and materials  [availability].

The Police Station has a lot of stagnant and filthy water, plus refuse.

Recommendation is disinfection with chlorine after drainage, health education team/materials, and provision of mosquito nets (100).

The Camps have the problem of overcrowding, few mosquito nets available, and no hand-washing facilities.

UNICEF Feed the Children, and World Vision International have thus far helped the people of Karonga District with various sanitation items such as five drums of chlorine (UNICEF) and sachets of waterguard (all three).

The priority areas are: food, shelter, water and sanitation, and risk reduction measures.

Concern About Souring Relationship with Britain

Britain is one of the long, outstanding donors in the country, since Malawi was a British Protectorate.

As one of the civil organisations, we know how powerful Britain is in our country in terms of aid, so we are not sure whether some of the projects will be suspended or not.

If you would like more information on this situation or want details on how to help,