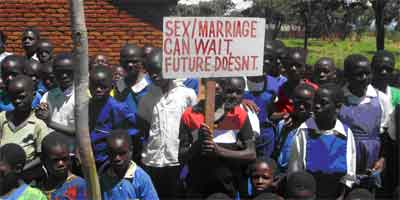 Let the Children Speak: Give A Child Freedom to Education

By January W. Mvula, Executive Director, SURCOD
Sustainable Rural Community Development Organisation (SURCOD) Malawi, hand-in-hand with other NGO's, took a turn in conducting an open day where the school-going children were given a chance to voice their concerns on child protection.
{div float:right|class:updates}{/div}

The Day of the African Child

This was conducted on 19th March 2011 as one way of commemorating the day of African Child. The main theme was
“GIVE A CHILD FREEDOM TO EDUCATION”.

During this activity the children were given a very big opportunity to voice out all sorts of violence that they face – starting from their homes, playing places, schools, and any other places where the children go.

The children displayed messages which were advocating for their freedom to education, and some of the displayed information read:

"Can you imagine a parent exchanging their child's dignity for cattle?"

Forced marriage and attitudes towards girls

As SURCOD, we are very much concerned with the culture of forced marriage in Chitipa District, which is known as Kupimbizira, that is forcing a good number of young girls as early as 12 years old to leave school to go into marriage.

"In Malawi there are just so many cultures that are exploiting the girl child – which most of the parents think is normal."

This culture promotes the parent to force the girl child to early marriage in exchange for riches in the form of cows and money.

For example in one of the schools in the district, there were 12 girls in standard eight – as per the enrolment at the beginning of the school year; but come to this month of March, 2011 - which is the mid-second term, the 11 girls out of 12 are out of schools to marriage, leaving only one, and that was because she was the teacher's child.

From this analysis, we are appealing to well wishers who are concerned with this bad behaviour the parents in Chitipa are doing, to join hands with SURCOD through the Girls Empowerment Programme in enhancing dialogue with local leaders, parents, teachers and the citizens on their role in child protection.

During the day the children performed various activities in which they composed different messages that were aiming at increasing awareness on the issues pertaining to child protection.

No matter; there are a number of charters which were drafted in recognition of the issues that the children are facing.

It is so sad that there are some cultures which are giving a cold shoulder to these charters, as well as ignoring child rights.

In Malawi there are just so many cultures that are exploiting the girl child – which most of the parents think is normal.

Now the children are voicing their concerns, and all sorts of violence that they face from the people whom they believe they can protect them.

Can you imagine a parent exchanging their child's dignity for cattle?

There were many activities that the children performed to voice out their concerns; these included dramas, poems, traditional dances, and the like.

I also talked against the behaviour of other parents of raping their own children as instructed by traditional doctors as a mechanism of becoming rich, which is very common.

Each and every month Chitipa receives not less than five cases of rape, which is a clear indictor that as parents, we are becoming reckless with child protection.

I also said much on the child rights, which most of the parents are not aware of.

We will be very grateful if other well wishers would contact us and join us in this battle which will easily shape our world.