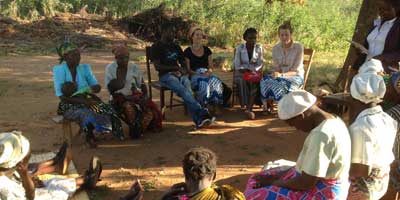 Sustainable Rural Community Development Organization (SURCOD) has 24 women's saving groups. The mobilization of these women within the groups seems enlightening to the organization’s mission in facilitating development in the rural communities.

The women’s groups have a common goal, which is ‘saving’.

Through this, the women are trained in becoming self-reliant, managing their funds and overcoming their problems. Behind the savings there are many other reasons why the women join the SURCOD savings groups around their homes of residence.

Some of the reasons are:

just to mention a few.

The women's saving groups are governed by a constitution, which regulates how activities in a group should be carried out. One of the things the constitution stipulates is the election of the leading members of the groups. These are the Chairperson, the Secretary, the Treasure and some committee members. These work together for the well-being of the groups.

All groups use the same constitution provided by SURCOD under the guidance of women's saving modules. However, the groups have the freedom to make their own constitution as well.

The savings are done across the year and new members can join at the beginning of the year. This makes sure everyone accesses equal benefits from the group.

The savings are organized in two categories: the social fund and the shares, serving different purposes.

The social fund works on short term purposes like emergencies of any kind e.g. sickness.

The shares are for long term purposes, e.g. distribution of money within the group. They are usually shared at the end of the year, probably in December. This is a period of great happiness for the women, since they can focus on the things they had been planning since the beginning of the year.

During the year, individual savers internally obtain small loans, which are repayable to the saving group with an interest. This is agreed by each group member. The loans are either used for business or other related activities. The interests from the loans are added to the shares specifically for the whole group’s benefit.

As the saying goes “You reap what you sow”, SURCOD has opened up the way and light is beginning to shine in Chididi.

According to the survey carried out through the trainings, face-to-face interaction with the women during lessons and sharing of ideas, it has been observed that the project is bearing healthy fruits.

The women’s lives are changing along with those of their families.

Most of the women are able to carry out responsibilities that were initially performed by husbands, e.g. feeding and clothing the family. Now the women are able to improve the situation of their families, paying school fees for their children, building cemented houses with ironsheets, buying and practicing poultry farming.

For instance, two women from Tigwirizane saving group in Mchacha, Mrs. Alephar Lova, the chairlady of the group and another member of the same group who needs to remain anonymous, gave their testimonies on how they have benefited from the SURCOD Saving Groups in the last season.

The two respectively bought some goats and pigs that they expect to sell and put more into their shares, but also built a house with iron sheets.

They want to do even more developmental activities in their families with this year’s shares.

These are not the only examples, in other groups, it has been observed likewise. This shows how effective the project is towards improving the livelihood of the rural women and their families.

It's impressive that more women are coming to join these groups following the successes observed despite some quitting as members. Some of those women who have quit have expectations which are not met and find no reason to belong to a savings group.

Something the women need to know is that SURCOD is not there for material aid, but to show a way to reduce poverty and where possible assist with something material-wise.

Currently, the organization has four local volunteers working with the 24 women saving groups. The volunteers assist in different activities in their groups during the meetings. They teach on the benefits of being members of a saving group – particularly with SURCOD.

The volunteers use some prescribed modules as a guide towards effective knowledge installation in the women.

They also facilitate cooperation, love for each other, and its importance. Another thing is that the women are advised to remain respectful to their husbands much as they can handle some family responsibilities.

These are Mathilde Tomasella from Germany and Italy, and Kadri Kakkum from Estonia. In the history of the organization, they are the first international volunteers to work with SURCOD.

The purpose of the proposal for the internship was to incorporate multi-discipline in the implementation of Chididi Women Savings and Capital Building Project and furthermore, to share experiences with students and those working in various fields so that together, we can share various experiences in managing the organization’s projects.

Both local and international volunteers work together to create sustainable livelihood for the improvement of the local communities in Chididi.

During the period of internship, there were some things that were impressive pertaining to the work and some that were disappointing, especially during lessons.

To begin with, much as many women have envisioned what they want in the groups they belong to, most of them seemed unaware of their role.

As a result, they could find themselves in many organizational saving groups.

This brought poor participation in group activities and therefore, slowed the growth of the groups. This was a drawback to some members of the group who initially were hard workers.

However, such members were strongly advised to choose one saving group of their choice – this would make them concentrate on one group and save more for a greater yield.

In most of the groups, time management was a big problem.

As a way to deal with the problem, an emphasis was put on the importance of minding time in all activities they were involved in. “Time is money” and needs to be spent well. They were advised to plan their time properly looking at the family and group activities. On some occasions, the volunteers came late for the lessons as well.

This was a bad example as they needed to set a good example to the women on why it was important to respect time. However, it was taken care of.

Much as women could come for the meeting some could not participate fully.

Mostly they were occupied by other things on their minds. Some were disturbed by kids and women making noise around the learning environment. This made some women fail to follow the lessons properly.

Ways of making a good group meeting were taught using various visual aids. They were also taught the importance of participating in the lessons for easy and deep understanding.

It was also mentioned that the meeting places should be favorable enough to avoid disturbances of any kind. Some of the women dealt with were illiterate.

This was a challenge because they needed more energy to be spent on participating. It was impressive, however, that most of them were able to follow lessons and could be free to express their minds.

The place that was meant for internship volunteers to stay in was not very much favorable until a new place was found. This was a kind of disturbance to the interns as they could shift their concentration to something out of unrelated to their mission. This affected the lessons as well.

If the organization could access in advance, a place for internship in Chididi, the better.

There was also a challenge in visiting some groups due to long distances on foot sometimes.

For example, the distance from Masimo village to Jofilisi. Much of the energy got lost through the long distances and this affected how much the volunteers could manage to share with the women on a particular lesson. However, there were moments we used a car to such areas.

The lessons were impressive-looking at the participation, and remarks often made by the women, local volunteers, spectators and the lesson providers. This was the case because of enough time that was there to prepare each lesson, but also an access of a place to stay close to the working area.

So far, five topics have been covered already with an expectation that they will bare fruits much as more topics are still coming ahead. There was a wish to have all the groups access the lessons.

Tuesday, Wednesday and Thursday were the working days according to the timetable made by the volunteers. Monday, Friday, and the weekends were the resting days. Weekends were also happy moments.

There were good things happening like having a cold drink somewhere in town. It was a nice moment to relax.

SURCOD has other projects pertaining to community development that it needs to carry out.

Green and compost manure making, HIV/AIDS awareness, and tailoring are some of the other projects underway. However, to be able to do this, the organization needs more funding much as it is just growing.

One way is having more donors. It could also try where possible to fundraise for the organization.

If possible in future, it could try to build a business area in Chididi; for example, a guest house since Chididi has a good weather during summer as compared to Nsanje Boma. There are also fewer mosquitos in Chididi.

It could also find a second hand pickup to be running Nsanje to Chididi under a certain fare.

This means development also, the core subject within SURCOD’S mission. Through this, it could also raise funds for the organization.

SURCOD's office is located in the South of Nsanje District Hospital about 100 meters away. It is a growing organisation that concentrates on rural women’s empowerment in the Chididi area.

This area covers three group village headmen: Group Village Headman (GVH) Mchacha, Mpangira, and Mkhutche. All these are in the area of Traditional Authority Malemia.

The organisation aims at promoting sustainable integrated community development for the rural communities, through improving food security, household income, and access to social services, water sanitation, and promotion of natural resources. However, Nsanje District has several other non-governmental organisation (NGOs), working on the improvement of the livelihood of rural people.

It started with a small staff that was officially employed and some volunteers that are based in Chididi. As an organisation, its task is to facilitate development based on self-dependency and self-sufficiency of rural people, as well as poverty reduction by enhancing community interventions to increase agricultural production, natural resources management and climate change resilence.

This is possible through effective implementation, promotion, and support of integrated rural development projects with full participation, ownership and empowerment of the community.

Most of the information in this report has been examined, investigated, surveyed, and gathered from first-hand experience, in a period of one month and two weeks.