Sally Hayden: My Journey to Nsanje 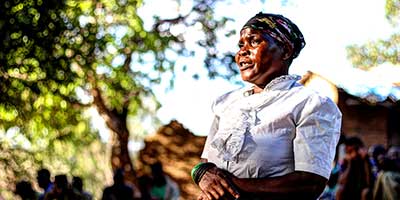 Sally Hayden: My Journey to Nsanje

The women I met in Chididi were inspiring. Of my three interviewees the first was calm, the second stoic, the third determined. Initially I mistook their composure for reticence, though at the end they thanked me for listening. It was only afterwards that my Malawian translator told me that, as a cultural rule, women in Chididi have traditionally never discussed their lives.

In ‘Lonesome Traveller’ Kerouac said “No man should go through life without once experiencing healthy, even bored solitude in the wilderness, finding himself depending solely on himself and thereby learning his true and hidden strength.” Since I arrived here my “wilderness” has been a room in a huge house with a sprawling garden, and five full-time staff members for only four residents. My next trip was to provide a counterpoint to that.

Lilongwe’s bus depot is a dusty pandemonium beside a labyrinth of a market. Men offer destinations, women proffer tomatoes, expats avoid completely, opting instead for luxury coaches that leave from the other side of town. Ignorant as to why, I spotted a bus with a ‘Blantyre’ sign on it, and happily bought an €8 ticket. Unfortunately my ticket didn’t include a seat, an issue which became apparent once I got on board. Malawian “local” buses don’t have departure times, but leave when they are full and then some. I ended up sharing three seats with four other people, including a sweet boy who called me ‘Aunty Sally’, and asked me where my village was. At least fifteen people stood in the aisle for the entire seven hour journey.

After a night spent with a friend’s friend in Blantyre, eight in the morning saw me back to a bus depot. The next bus was a different machine altogether. The roof was piled high with furniture. The first rain I’d seen in Malawi leaked through the windows. The sliding door didn’t slide. A loud peace corps volunteer proclaimed it a “prison bus”, and told the assembled passengers that we should all come to America, because “everything’s much more efficient there”. Seven more hours of unpaved roads stretched out ahead of us.

When you look across the unfinished port in Nsanje town you see Mozambique, and for a brief period several years ago this body of water offered the area reprieve. This came through a proposed initiative to connect land-locked Malawi to the Indian Ocean, 238 kilometres away. A reduction on the high costs of importing and exporting goods would have caused this region to flourish, but international politics delayed development, and when former President Bingu wa Mutharika died suddenly of a heart attack last year the dream died with him. Instead the general locale is ignored by most Malawians. After an amused chuckle, the common refrains I heard when I told anyone where I was going were “too hot”, and “too many mosquitoes”.

I had chosen Nsanje by chance. One of my good friends has worked with Safe World For Women, and after a few introductory emails, Chris Crowstaff put me in touch with January Mvula, director of the Sustainable Rural Community Development Organisation (SURCOD). I wanted to spend time with a locally-run group, and January comes from Chididi, the mountain village in Nsanje where his organisation operates. Ninety percent of Malawians live in rural villages, the same percentage that earn less than $2 a day. To properly understand the country, it’s necessary to spend time in a village, and given that the only reference I could find to Chididi online was in the blog of a preacher who had visited there a few years ago, it seemed like an interesting option.

Mzungu is the Chichewa for a ‘white person’, and developed from words that mean ‘behaving rich’, and ’someone who roams around aimlessly’. After an hour driving up a crater-filled track, I emerged from the car in Chididi to children excitedly shouting ‘mzungu’, and soon had thirty of them following me at a distance as I went to do my first interview. Later, the word re-emerged as we arrived at the village secondary school, accidentally disturbing a hundred-student strong school assembly, when everyone turned their attention on fellow mzungu Chris and I instead of their speaking principal.

The women I met in Chididi were inspiring. Of my three interviewees the first was calm, the second stoic, the third determined. Initially I mistook their composure for reticence, though at the end they thanked me for listening . It was only afterwards that my Malawian translator told me that, as a cultural rule, women in Chididi have traditionally never discussed their lives.

The quiet fervour displayed in the village meeting that followed confirmed that changes are occurring. With encouragement from SURCOD, women are forming groups to work together, both through savings schemes, and through small businesses.

Poverty breeds isolation, but these initiatives are combating that; people are pooling resources and pooling problems.

Several speakers spoke proudly about how economic independence is emancipating them, particularly from domestic violence.

“At first we were beggars to the men. Now we are even supporting our husbands.”

But huge obstacles still remain. Without an ambulance, Chididi’s inhabitants lack access to emergency healthcare, and many women have died during childbirth. Most residents drink water from unprotected wells, and less than ten girls have graduated from secondary school in the last ten years.

We ended the day dancing the ‘olimba’ to music from a makeshift marimba. I also spent a large portion of time  with a mass of children who wanted their picture taken, and then had trouble working out which one was them when I displayed the image on my camera’s screen. As the sun set we said “zikomo” and goodbye, and descended the mountain to Nsanje Boma.

In true Malawian style, the minibus journey from Nsanje to Blantyre included two live chickens, an apparent police bribe, a lot of black smoke, and a CD of religious music played loudly on repeat. Back in Lilongwe, far away from the margins of the country, people chuckled again when I told them I had returned. “Very hot, was it?”, “Lots of mosquitoes?”