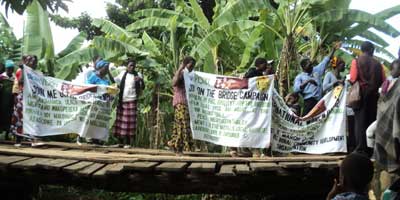 Advocating for Women's Empowerment, Through Dance, Song and Theatre

“This is the right time for men to change and start valuing the women and girl children as an important asset in the family”  – Mrs. J. L. Chindenga

International Women's Day - Celebrating With Women Throughout the World

This year's theme for Women for Women International's Join Me on the Bridge Campaign was "Women are building bridges of peace, equality, and hope for our future, having an equal voice and a seat at the decision making table, at peace negotiation table, in parliament and in the national and local authority at the leadership level of companies and businesses".

Since Chididi women are also advocating for this, SURCOD (Sustainable Rural Community Development Organisation) convened the celebration in collaboration with the fellow women throughout the world.

The activity was planned so that the women were coming from three different places to all meet on the bridge; the first group came from the Mangila (village) side, the other came from Mchacha village, and another group from Mkhutche village.

The programme started late; this was due to the fact that the vehicle we borrowed from the Office of the District Commissioner was busy with the assessment and rescuing flood victims in Chiromo, and as a result, a three-ton lorry was allocated to us.

Local Leaders and Police Women Join In and Show Support

GVH Mkhutche was led by Sergeant Chimberenga and Miss Hannah Vareira  – the Executive Member, Brian, our Field Facilitator, and Eunice Viyano, our volunteer.

Meeting at the Bridge 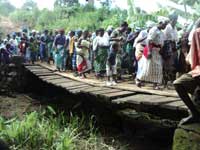 All the three groups met at Chididi Bridge carrying banners and singing songs which were advocating for equality and empowerment of women, and equal access to in all positions [in public service] starting from local authority, government departments, political positions, as well as in companies.

After the three groups met at the bridge and celebrated over building the bridge of peace, equality, and hope for the future of having equal access, all the women went to gather at Chididi Football Ground where the cerebration was officiated, as well as the Guest of Honor introduced, and the other women encouraged the women.

During the ground ceremony, the  Mistress of Ceremony was Miss Flossy Kamoto from the District Community Development Office. The functions started with a word of payer led by Pastor W.J. Mvula from River of Life Evangelical Church, and then introductions were done.

During the meeting the women prepared traditional dances where most of the songs advocated for women's empowerment as well as asking the men to change their mindset on women.

The women also displayed their skills in the savings concept through acting, in which they were advocating for freedom to associate in various business opportunities to change the mindset of some husbands who still restrict their women to participate in business activities.

Girls Ask For Education Before Marriage 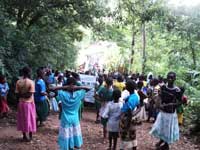 The girls from Chididi primary school also took the floor with the message asking their parents to grant them their freedom to education before marriage.

The girls insisted in their song that early marriage is contributing very much to poverty in the area and they are no more interested in it since they wanted to be [treated] like the guest of honour.

Local leader GVH Mkhutche thanked SURCOD for introducing a number of initiatives in the area which aim at empowering the women; he said much on the benefits of Village Savings and Loan Association (VSLA)  groups, which he noted that he has a firsthand proof from his wife buying him a trouser with the money realized from the savings.

He also urged the men to encourage their wives to participate in the saving groups so that they should benefit from the initiative and promised to deal with any man who prohibits his wife from participating in the savings groups. 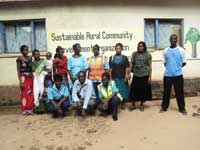 GVH Mkhutche informed the men that when such reports reach him, the man will be charged heavily to pay 10 chickens or goats, as penalty for this case.

The administrator of SURCOD gave the background of the organization, of when it started its structure; e,g. Executive Director, Board of Trustees, Executive Members of the District.

Also, some of its strategic plans, including agriculture and food security, basic adult literacy, education, water and sanitation,  and HIV /AIDS.

He also thanked the local leaders for encouraging more women to participation in the VSLA.

'Send Your Daughters to School' 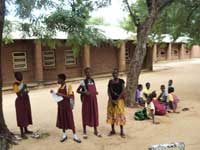 The Nyamadzere Coordinating Primary Education Advisor (CPEA) spoke about the great opportunity given to women in all sectors through the VSLA – that they are able to send their children to school instead of depending on men. She encouraged the Chididi community, especially the women, to send their daughters to school.

“If Chididi women want to be leaders they should start by investing in education of the girl child”, she said; she condemned the acts of other parents who are sending their daughers into marriages in exchange for money. During her speech, she also encouraged the women to take part in business initiatives, which SURCOD and other organizations have introduced.

On behalf of the District Commissioner,  Finance Officer Mrs. J.L. Chindenga, talked more about the girls who need encouragement to go to school up to university level, so that they can achieve the goals of the Join Me on the Bridge campaign, as well as their own.

She also reminded the group that as we are having this freedom of association in Malawi, in other countries like the DRC, they lack this opportunity.

Mrs. Chindenga said it broke her heart to see other husbands infringing the rights of  women by denying them a chance to do business.  “This is the right time for men to change and start valuing the women and girl children as an important asset in the family” she insisted.

'Don't Exchange Your Daughters for Money'

Mrs. Chindenga condemned the behavior of other men who are destroying the future of girl children in exchange for money. 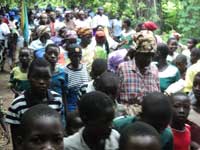 The District Community Development Officer, Ms. Flossy Kamoto, talked much on the importance of working in collaboration between women, men, girls, and boys, as in the example at Chididi Bridge.
“This is the symbol of peace where we are all taking part in development activity,” she said.

She appreciated all the men who unveiled themselves at the function and those who allowed their wives to take part in SURCOD initiatives. She also encouraged women to attend adult literacy classes which can assist them to read. 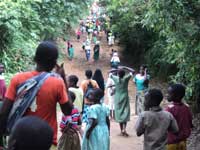 Mrs. Charity Naphwanga from Nsanje Police Station emphasized the work of the  Community Victim Support Unit and Community Policing. She talked about the tendency of some men who are involved in raping girls  –  requesting that  the community to take the girls who are the victims of rape to the nearest hospital as soon as they find out the situation, and that the girl should not be bathed before the medical examination, but after the examination they can allow her to bathe.

Mrs. Naphwanga  also reminded those men who are doing this, that under Malawi law, this crime brings 14 years' imprisonment with hard labour.

She also mobilized the Community Police forums in Chididi to prioritize the issues of rape and gender-based violence, and she commended SURCOD for the good work of sensitizing women about their rights.

Messages of Empowerment Pledges Were Achieved 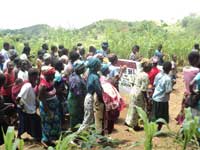 Even though the activity was designed to empower the VSLA members, the activity turned into a public forum where many people came and received the message of empowerment, equality, and involvement of the community.

The community was sensitized to abandon the bad cultures which are predisposing girls into early marriage.

The women and men were enlightened on their responsibility towards the ending of GBV (Gender Based Violence) in Chididi, as well as the whole country.

The men were able to see how VSLA is empowering the community in Chididi and beyond as well as making a difference in the member families.

The local leaders pledged their commitment to end GBV. The girls were motivated with the role models who came to address them on the secret of success.

The problem of mobility in the organization is affecting the implementation of our activities; SURCOD appeals to all well-wishers to support us in this area.