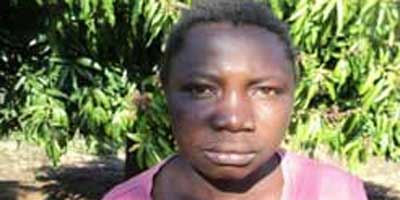 Margret Kastom, a single mother of two, is a member of Ndadziwa Women's Group in Malawi.

This group of women is practicing Savings and Capital Building, a pilot project that is being implemented by SURCOD in Malawi. She is 25.

Her husband left for the Republic of South Africa four years ago in search of greener pastures.

Since her husband left, Margret has never heard the voice of her husband –  nor read a letter from him.

Margret, a literate woman, has passed through highs and lows in life just as well as everybody else has.  But, she says, the lows without a husband eclipse all the good days.

Suffering from food insecurity throughout the year, as much of her time was spent on piece jobs to get food for the day.  The small house that her husband built was almost dilapidated.

Her meagre income mainly came through selling fuel wood, which she used to fetch from the nearby forest reserve.

Life was not good for her.

Savings and microloan sparks a new life for Margret

Having attended the awareness meetings that the organisation conducted in the area, Margret and her friends formed the Ndadziwa Women's Group in February 2011.  She started making savings, and later sourced a loan from her group.

She used the loan to buy farm produce in the area like vegetables, peas and maize for reselling. Her plight with the two little children began to lessen.

Margret stopped going to the forest to collect firewood.

She used the same effort and strength to ply business in her area. Her business earned her enough profit as she was the only woman trading in farm produce as business in the area. Furthermore, her interest and knowledge in business increased after being trained in business management. Margret finds market research to be particularly invaluable.

Margret started mobilizing to acquire building materials for the construction of her new house. She bought burnt bricks and timbers first.

She obtained a few used building materials for the house from her father-in-law, like a frame and door.

Her father in-law also assisted her in providing labour and supervising the construction of the house. The house was built at the cost of K20 000.00 ($125), approximately.

It was raining cats and dogs. The grass on her roof was scanty and almost rotten. Every drop of rain fell on her head and the two children.

All her belongings were soaked, including the little flour she had.

She had one child on the back, and the younger one in front for breastfeeding and easy care. The continuous rains lasted for almost three days, and she spent all the three days standing and kneeling down.

And there was nowhere for her to lie down and sleep as every corner of the house was saturated with water.

This year, Margret is not tormented with this past experience.

Margret never owned good kitchen utensils even during the time her husband was in Malawi.

Her ambition to become a member of Ndadziwa Women Group has brought a considerable change in her household.

She now owns nice utensils including a pail for carrying and storing water.

Her dignity as a human being is restored.

Margret appreciates the work SURCOD (Sustainable Rural Community Development Organisation) is doing with support from Volkart Vision, and she feels the project should reach more people because their lives will be improved and brightened, just as good as her household has benefited.