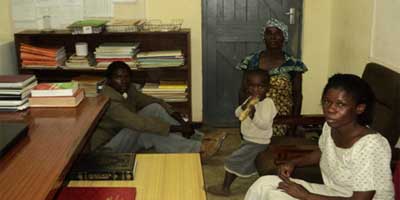 Mrs. Chakanza near the Door, Ms Ndasowa Form teacher and Phillip during discussions at the Head teachers Office at Nsanje secondary School

The concept allows members to contribute money and lend to each other within the group. The loan attracts an interest rate of around 20% – payable after 30 days from the day the loan was obtained.

SURCOD develops the capacities of the women in group dynamics and business training. Currently, 20 groups have been formed and the population comprises 250 women.

The project has achieved a lot. Among other things, we are proud of producing groups to an area believed to be dry and non-responsive to new concepts by most institutions including the government.

Groups have responded very well to the concept. This is clear when looking at each group's monthly contribution. This is the core area of the project.

The organization has been positively affected by the overwhelming response of the women in Chididi. Instead of running the project from the central office, management has decentralized the system by having two field workers right in Chididi. The central office is almost 17 km away from Chididi.

SURCOD has won the hearts of the people, including traditional chiefs.

Many have tried in Chididi, but failed because they find the place expensive to run a project due to its rough hills and poor telecommunication.

We are now able to interact with the community, including chiefs. We are able to talk about the most sensitive issues that communities rarely talk about, like traditional beliefs that put women in a disadvantaged class.

We are also able to interact with government departments like the Community Development Office and the Local Government Assembly. These arms of government are able to share their resources with us by using their knowledge and motorbikes.

During the past three months we were able to conduct informal Business Management, Savings and Loan Management trainings through our two field officers hand-in-hand with the Department of Community Development under the Ministry of Gender and Child Welfare.

These trainings have really assisted the women to have more knowledge of savings and business management.

We were also able to sensitize the local leaders through the Village Development Committees, where we talked much about the role of the women in society, as well as women's participation in business.

During the meetings, the local leaders really acknowledged their role in the promotion of women's needs through establishing the saving groups in their respected villages as a tool to poverty eradication.

Local leaders also promised our organization that they will take a leading role in sensitizing the men to support their women towards group saving, as Senior Chief Malemia said:

“In the past women were not allowed to take part in business –  and those who were doing business, were regarded as prostitutes.

But with the coming in of SURCOD, the situation has really changed, and we have now realized that women are also good entrepreneurs.

Being the Senior Chief of this area, I will deal with any village head who will infringe upon the rights of the women through denying them the chance to participate in various businesses; my wish is to see all of you living a better life and poverty should be history in my area.

I recommend SURCOD to go in every village to unveil the saving concept so that the women should be recognized through their activities.”

Mr. Fodya is a subsistence farmer in Chididi. His wife is Megi, a member of the Tisungane Women Group of Mchacha village.

The family of Megi did not have enough cash to buy seed during the previous planting seasons. This problem occurred for two growing seasons. As a way of survival, Megi was left alone with farming while the husband was doing piece jobs to feed the family of six. This did not work well enough.

Instead, the family opted to borrow maize from local traders which they promised to pay back twice the amount borrowed after harvest. The rain that year was erratic which led to poor harvest. The family of Megi honored the local trader still as promised. They were left with few 50 kg bags of maize to last them barely five months.

The following growing season Megi and her husband decided to lend their bigger piece of  land to another farmer.

This farmer gave them few bags of maize to supplement on what they had harvested from the previous growing season. This did not quench their  problem either as they had to  rely on a small piece of land belonging to Megi’s late mother for cultivation.

During this year, the rains were very rational. Megi harvested enough maize for she applied fertilizer that was given to her for a subsidised price under Malawi Government Fertilizer Subsidy Programme. Her household economy began to get better.

On the path to food security for the family

She took her second loan in May amounting to MK1600.00 plus the MK400 she had which she used to buy used empty sacks for resale.

She also bought salt with the remaining MK1000.00, which she was bartering with maize in the surrounding villages. She paid the loan MK1600.00 plus the interest of MK320.00, using sales from the sales from the empty sacks, and also remained with MK600.00 as her profit –  and she realized seven 50kgs bags of the maize from the barter of salt.

Megi is now boasting to be food secured this year because she has managed to get seven 50 kg bags of maize from the barter business.

She is also sure that this year she is going to cultivate her bigger piece of land. She is prepared to solicit yet another loan in August.

The profit she will get will be used to buy seed and fertilizer.

Megi's children have suffered in school

The first born, a daughter age 11, nearly left school for the burden of looking after the younger ones was on her. She was a mother at 11, while both parents were working for their daily little food elsewhere in the neighborhood.

Megi sees her children resuming school once the school opens this year and she encourages her daughter to do well in school, to pick them off from mud of poverty in the next 10 years.

She has since commended VVF/SURCOD for introducing savings and capital building project in her vicinity.

One of SURCOD’s objectives is to promote quality education and adult literacy. Education and literacy are key areas to development, and SURCOD is implementing this objective with the help of the Harry Singh Scholarship.

The aim of this project is to educate vulnerable secondary school students –  especially the orphans, and those students who are coming from disabled parents, as well as aging parents.

The aim of the organization in introducing this program is to share the little with those who cannot manage to pay school due to poverty.

This support has really transformed the livelihood of the supported student, as one of the student's parents says. She is a widow she doesn’t have any means of getting money to pay school fees for her son who is in form 3 at Nsanje Secondary School.

She always goes round to those who are well to do, asking for piece work in order to pay school fees for her son.

Before this support was available, the parent – Mrs. Chakanza from Malemia Village, Traditional Authority (T/A) Malemia, was unhappy, but now she is happy, and thanks the head teacher for choosing her son to be one out of many vulnerable children.

She promised to encourage her son, Philip, to work extra hard for a better future.

Mrs. Chakanza near the Door, Ms Ndasowa Form teacher and Phillip during discussions at the Head teachers  Office at Nsanje secondary School

“Before the support,  I was unable to attend classes for the past  month of the term since I was busy doing piece work from well to-do people, with an aim of raising my school fees. But this term, I started  on the first day with my friends.”  – Arnold John, from Chekerere Community Day Secondary School (CDSS).

The main problem which is affecting our operation as a project is lack of fuel and the economic crisis in the country.

Malawi is really going through a hardship as life is becoming very expensive. Even if we go to the hospital, there are not enough medicines –  which make the doctors refer the patients to buy medicine from private hospitals, while admitting them  in government hospitals.

The basic things such as salts, and food stuffs –  which a poor person cannot live without, are also taxed, and this is pushing back the poor man in the vicious circle of poverty.

This, plus other things, forced the civil society organizations like SURCOD to take the government to task –  which didn’t fare well, as the demonstration that was organized on 20th July led to the death of 19 people.

May their souls rest in peace.

Economically,  this is pushing our women backwards, since the small businesses they are doing are also heavily taxed.

Due to lack of fuel, we are forced to buy expensive fuel found on the black market; this is also affecting us as these raised prices are more than what the project proposal projected.