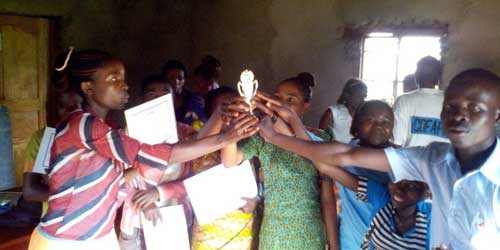 Some of the graduates with the trophy presented to COFAPRI by Karhongo Tradtional Chief, Mr Cishugi. All photos by COFAPRI ©

Most women in the villages of the Democratic Republic of Congo depend economically on their husbands. This has been one of the main causes of increasing domestic abuse. When a woman cannot generate an income, it brings negative consequences for herself and her family. However, giving a woman the chance to produce an income empowers her, and makes her family shine.

It is in this context that Congolese Females Action for Promoting Rights and Development (COFAPRI) decided to help the women in the rural DR Congo to get involved in learning a life skill such as sewing; the women are also involved in many other income-generating activities.

The aim of this is to help the women become economically empowered.

We are immensely grateful to the MBA team from the Kelley School of Business for valuable guidance on this pathway back in September 2014.

Thus, on April 10th, COFAPRI awarded 56 certificates to rural women in the DR Congo, in the village of Nyangezi. The women had been learning sewing skills in two consecutive cohorts. Some started earlier; and they numbered 30 in their respective group. These women started the sewing programme in January 2015. The second cohort of 26 women started in June and ended in December 2015.

The ceremony took place in Nyangezi, in the Hall of Rhandahi Guest House. COFAPRI gathered about 300 people to commemorate this great event. The graduates were dressed impressively.

All the local authorities had been invited; all of them came.

Before the end of the ceremony, everyone shared drink and food. They did not hide their joy, and many started dancing!

Many speeches were given, all encouraging the initiative. Here are some speeches – verbatim, from some of the speakers:

“COFAPRI is an amazing organisation that is spreading far in the mountains of our villages where bigger NGOs, local and international, are fearing to reach. COFAPRI remains a model NGO in the area, and the women will never forget the good this organisation is doing for them.

To crown their efforts, I have decided to offer them a trophy for encouragement, recognition and also to mean they are reaching where bigger organisations never reached for fear of fighters.

Congratulations, you made it COFAPRI. You are a way-finder for everyone willing to lift women from poverty and abuse. I would advise these women to remain united as they are today. If they can work together in teams, there can be more achievements in their efforts. A good student always walks in the steps of their master. COFAPRI has shown you the way. We have seen you and we appreciate your efforts.”

“I have been hearing of this amazing organisation; I heard a lot of its founders who do not live here but commit to set their organisation here to help our mothers, our wives, our sisters and our wives. This is a good example to follow.

The women in our villages have been shown a true way to go, and the certificates the graduates have been awarded show the strong commitment the organisation has toward developing our villages. I urge you all to remain in touch with COFAPRI. They have shown the way and you have to walk that way; you are moving toward development.

So working in groups is the way you will go. In groups, you will achieve a lot of helpful things.”

The graduates were urged by different speakers to remain committed, united and to work in groups. It is in this context that COFAPRI helped them to form teams. Now they are in five teams.

Each team was given a sewing machine, in addition to the six sewing machines they initially had. This means each team has two machines with which to start their business.

The event was covered by a journalist sent by Radio Maendeleo, Mr. Mpamago Pacifique. This is the most popular radio in the villages of South Kivu. In the evening, the news was on air. People had been informed of the graduation. This is the second time this radio has covered COFAPRI events.

“We have seen many NGOs here. They often come and go the way they came. This one has been here for a short period but they are making change in lives of rural women and children. Covering this event means a lot for me, and it gives me pride. We can see the reality, and here the practice triggers our hearts today.

The graduates of today’s event are the candle bearers for the whole area. They have to be a model that women will learn from.”

The graduates' representative spoke and thanked the COFAPRI team and everyone who has been helping the organisation to reach their objective. She also thanked the local leadership for attending the ceremony, without any absences, and asked all the people present at the event to support the members to get more machines.

As the graduates have said;

“The work has now started. We now have certificates, but this is not the end of our struggle. This is the dawn of a new life; we need more support, more machines for all our members so that our input can be enough and sustainable.

The programme we have been taking will really have a positive impact in our lives, the life of our families and our villages. Now we have hope we can make something necessary for us and for the community.”

“My joy is immense. I have been suffering a lot to complete this programme. Now the certificate I have been awarded is a symbol that any woman can learn a life skill and succeed. To those who still fear, I think this is our time to change minds.” 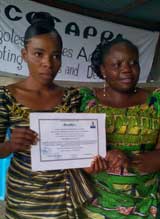 The Executive Secretary of COFAPRI, Ms. Bahati also took the floor and thanked all the people who have been supportive to COFAPRI’s efforts in one way or another. She equally urged all women to be innovative in finding ethical ways of getting out of poverty, and to fight abuse directed on them - in a nonviolent way.

She urged the women to work hard and hand in hand with the men who are willing to help them, so that the women can make a place for themselves in the community.

Bahati asked all leaders present at the ceremony to use the opportunity offered by COFAPRI to support the women in the villages of the province, so they can become economically self-reliant. She insisted that if people unite forces for a common cause, it often succeeds.

Bahati mentioned that COFAPRI has opened the way and the people here around can bear witness to that. What remains is to support this initiative so that it grows sustainably in the villages.

If you would like to support COFAPRI sewing activities, or any other activity in which women are involved, it is always very much appreciated.