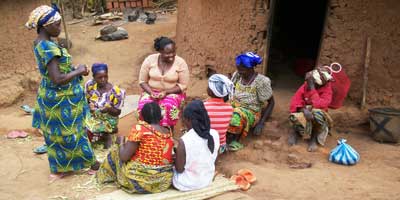 Focus on the rights of women and girls

As usual, the more days that move on, the more advancements people experience. In this context, COFAPRI has been more involved in its sensitizing campaign about human rights, with focus on the rights of women and girls in the DRC.

Since the creation of COFAPRI, no mature man had joined us, but this time an important person decided to be part of us. That is the Nyangezi traditional leader, Mr. Cishugi Nyangezi.

He told COFAPRI that it is a good project that people needed, particularly women and girls of this area in particular and of DRC in general. He promised he will help COFAPRI as he can to promote the rights of women and girls.

In addition, our coordinator informed us that COFAPRI has now opened a new branch in Mudaka. Mudaka is located at 25 Kms noth of Bukavu.

This growth is due to the interest that women and girls are expressing toward our activities of supporting women victims of domestic violence and those who were victims of war violence. The latter were raped and physically and emotionally injured, etc.

In Nyangezi, we started activities of bee rearing. Two hives were made and they have been placed somewhere to catch bees.

These bees will produce honey that we will sell and get some funds This honey is also used in different ways; it is used to cure some diseases, it can also be eaten with  bread.

COFAPRI has also purchased a small field in which the members have cultivated and sowed beans, maize and sorghum. It is a square form of 30 m a side. Too small, but it will help the members grow food to  feed the pigs and the other rabbits they will purchase in the future.

On the same land, they can grow some vegetables that they can use  as food. They have  worked in it themselves, but in turns. They said that during the cultivation activities, they happened to have discussions about some issues that are acute in their community.

In September 2011, COFAPRI members in Nyangezi were victims of looting, and their rabbits were stolen by unknown people.

Our coordinator reported that he went to visit the victims of the looting. One of them –  who is a widow,  told him that she was very sorry to be victim of such barbarity that causes them not to develop.

She was expecting to get some money when those rabbits would produce kids – money she could use to pay school fees for her children her husband left to her. She said that with rabbits, she could eat meat and buy some articles for using at home. She strongly expressed her sorrow of such a bad event.

The women members of COFAPRI had started to buy some rabbits to share among the members as a way to get funds to self-finance their activities of sewing, knitting, molding bricks and pots, making baskets, etc.

Unfortunately, these rabbits were looted by unknown people. This act of barbarity blocked COFAPRI activities.