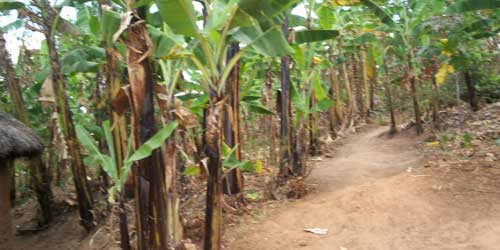 'Now things are OK, as you welcomed me among you here... now I am well, with all my children. All of them are going to school thanks to your generosity. I am also making some cash now in the centre here... I can now smile and laugh.'

Remaking Life From a Box

This is a story of a COFAPRI woman who survived rape, got pregnant from the rape, and delivered a child who is under COFAPRI sponsorship today. The woman was expelled from her family, ridiculed, called names, and totally lost confidence in herself and in anyone. Today, she feels glad she has been rebuilt by COFAPRI; her children are going to school, she can sew and her morale is now up.

In 2010, Maria was raped in her home while she was grinding sorghum on a stone in her hut. Women often grind grains that way to get flour for making Ugali (a staple part of the diet).

The war had been waging on an intermittent scale. Maria and her family had to run and come back, but fear dominated their minds. At that time, her husband had gone to seek a job in Tanzania, and she stayed home with their two children. Now she has three, the third being born of rape. She could not have an abortion because she believes that is not different from killing. She thought once her husband was back, she could tell him what had happened to her and make him believe – but this was not the case.

After a two years her husband came back. He found his wife had already delivered the pregnancy resulting from the rape. He could not understand what had happened. The wife told him of her fate, but the husband would not listen to that. A family meeting was immediately organized and sadly the conclusion of the family was:

"The family has been ridiculed by the behavior of this woman. She has caused us to lose value in the village. We have been waiting for you to decide, because this is unacceptable. Having a child born from an enemy on our wife is totally unacceptable. She has to go back to her parents and live there."

The husband seemed to take the side of the family’s decision. The wife was expelled with her three children, all of them girls.

On the issue of being raped, there was an underlying and pinning issue of having not delivered a son to that man. In many villages of the DR Congo, if a woman does not have a son with the husband she is considered as useless. Delivering a baby boy gives her weight in the family, and it also gives her some stability. Now being raped, and without a baby boy, has made her mega-fragile.

'A Long Way With Thorns'

Maria joined COFAPRI in 2011, and she was brought by her neigbour who was already an active member. At the start she could not tell us she was living in such difficulty, but with time, our coordinators happened to discover she was a rape survivor.

Her commitment to COFAPRI activities was really incommensurable at that time, and even today. She has a wonderful team spirit and she is always ready to lead teams and teach through her good examples. When I spoke to Maria recently, during my recent trip to the DR Congo she revealed:

"I cannot retell what I saw, heard and lived before I came here. It is a long way with thorns and holes; repeating that is just to throw me into a mass of burning fire. My kids are three, and one of them has a different and unknown father. That is what made me die alive.

Now things are OK, as you welcomed me among you here. Look, this is a room, a box, a small place where I restarted my life. It was not easy but now I am well, with all my children. All of them are going to school thanks to your generosity. I am also making some cash now in the centre here. This is the box where I remade my life. I can now smile and laugh.

You and COFAPRI and all the people you said are supporting us deserve to be in this area. You are saving many lives from this small box here."

Today, Maria lives happily and is a good example among other members. There are many women in our organization who have been raped and underwent the same ordeal as this woman. We are helping them little by little, and this is helping them to be open to us and tell us what they went through.

Many of them understandably fear to tell of their ordeal.