Education Key to Tackling Poverty and Violence in Rural DRC 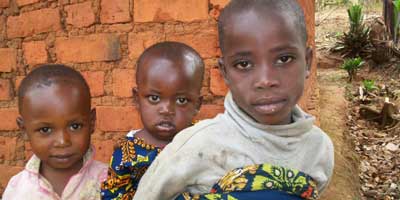 Breaking the Stigma and Silence of Violence 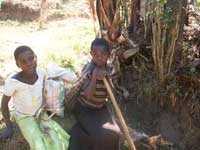 Born from rape. These girls are under COFAPRI school sponsorship programme. Photo: Bahati Valérie, August 2012One of the commitments of COFAPRI is to break stigma and silence around rape and domestic violence. This will help to eradicate the culture of violence that has taken deep roots in DRC rural remote villages where we currently work. The women in these villages experience horrendous poverty and human rights infringement on large scale.

COFAPRI strongly believes that this awful situation cannot be changed if people, particularly the women and the girls who are the most concerned, are not given chance to education.  COFAPRI also believes that sending these children to school remains an important, beneficial, and interesting investment for these girls, their families and the whole nation –  and, why not the world?

This is a way of addressing gender disparity that is on rise in the DRC in general, and in villages in particular.  The elimination of discrimination, disparity, injustice built around gender via primary and secondary education will be a strong support to the whole community. This, in other words, is what COFAPRI predicts education to be an undeniable and incomparable investment for these village women and girls’ welfare today and tomorrow.

Education is the key to sustainable development and no community can ever totally develop if its women remain uneducated and lag behind men in development.  Such education is an effective tool for accomplishing rural women’s development.

COFAPRI is tirelessly playing its best role at the individual, family, societal, national, and regional levels as a driver towards full respect of human rights and total development of women and girls.  This is a real opportunity whose aim is the improvement of gender equality, development and females’ empowerment where COFAPRI is based, which is in South Kivu, eastern DR Congo. The different activities in which COFAPRI is involved for the moment are purely to assist rural women of DRC remote villages.

These activities mostly concentrate on giving a hand and promoting the efforts of advancing gender equality in remote rural areas that are often neglected by local leaders and NGOs. COFAPRI does have not enough funds for the moment, otherwise we should be sending all girls without exception to school and their mothers could be involved in income-generating activities. With the little means we have for the moment, we are helping very few members of COFAPRI but this is promising.

"My pig has already given babies two times; the first time it gave four piglets and the second time another four. They helped me a lot to pay the school fees, materials, and uniforms for my children. I also gave one piglet to another team [member] who had not received one yet – and one to COFAPRI. The pig we often give to COFAPRI, is given to new members. This is a good thing. But we need more animals; COFAPRI is organizing us and opening us the eyes." COFAPRI member.

COFAPRI is committed to send all girls of its members to school. But this does not go smoothly; there are waves of challenges on the ground.

Challenges of Insecurity - Militia and Looting

The organisation still has insufficient means to achieve this wonderful adventure.  But compared to when we started our activities, we are moving ahead, slowly but surely. More women and girls are joining different teams that are set in villages, so the needs increase while our production grows slowly.

Furthermore, the region is very insecure due threats of war and the different militia are still operational in the area. This impedes us from reaching all our members once it is needed. At other times, these fighters loot our animals, which make us move backward instead of going forward.

If there was peace in the area, we’d have done a lot of things for our dear members.

Committed to Focusing on Girls’ Education

Girls and women’s education builds around development for rural women’s understanding of their rights and economic self-reliancy.

In remote villages of the DRC, most girls do not go to school. Women are prepared to feed and take care of the children, stay in the kitchen, and cook for the family. The girls are not sent to school as men in these regions believe that the girl will be married, and so she leaves her family and joins the husband’s. Besides there is a widespread belief that girls perform less than boys at school. So, 'no need to send girls to school.'

COFAPRI is committed to changing such beliefs in the minds of women and men in rural remote villages of the DRC.

It is obvious that there exist more connections between inequalities of gender in rural areas, compared to urban ones. This situation is very alarming for rural women, which is their reason for lagging behind men regarding the domestic economy. Therefore, women become poor as they live mostly on rudimentary cultivation of the land they rarely own.

As for land, rural women remain also land beggars because the lands are men’s property and not women’s. This is due to the strong paternalistic society that rules in villages and traditions and cultures of DRC, which does not give full rights to women to hold land - because women do not inherit their fathers'  land when they die.

COFAPRI is convinced that if these discriminatory rules and traditions can be broken, it will be due to the influence of education.

Poverty of women is explained by these traditions that forbid women to become involved in some activities, ranking them as second class people who must totally depend on their husbands who often do not even supply them with everything they need. This shows that these traditions are there virtually as they say; for instance, that the woman depends on man, yet this man does not help the woman. For this reason, COFAPRI thinks that if women and girls are educated, this can generate a smart investment for rural areas and so they can, in the future, acquire such benefits totally in their respective families; these women need to set free the aptitude of the human mind.

By educating all women and girls without exception, this gives meaningful sense for future economic growth at family and social levels, which triggers national development of women and girls.

In fact, if women are systematically discarded from schooling and the labor force transmutes into a less educated labor force, incompetent part of effort, vanished output, the result is that there is reduced progress of economic development. There is sound confirmation of this since we all know that societies in which gender is better considered are the ones in which there is also more probable higher economic growth at different levels. The truth is that society gains more in educating its women and girls. This actually leads to a higher efficiency in production for the majority of the population.

In other words, sending more women and girls to school will improve their lives in the future.

Moreover, this makes the women and their daughters totally take part more in the formal labor market. In this way, families can produce more income, which infers they get profits.

If DRC rural remote village women can easily understand the necessity of having fewer children, then they will have been given a way to access  better health care and education to their children.

Finally, these women can ultimately increase the well-being of their families including themselves by lifting their respective households out of acute poverty that is persistent in villages.

All the points developed above are the benefits that can also spread across generations, as well as to the communities at large and finally, the country benefits of them, also.