A Young Widow Leads Her Sisters in DRC Village 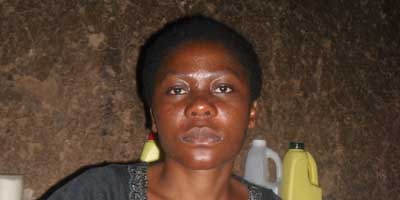 Last month, when I was visiting COFAPRI, on my way back home, I met a young widow, Nyota Noella Buroko. She shared her story with me.

Eloping With a Soldier 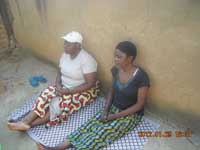 Nyota with Bahati - co-founder of COFAPRI

Nyota comes from Kabare territory, Kamakombe village, in the DRC. She eloped at the age of 14 with a government soldier, who was originally from Equateur, and who was on assignment in her village at that time.

Eloping is commonly done in most societies of the Democratic Republic of Congo (DRC).

This often happens because the boy fails to pay the dowry asked of him, whereas the girl loves him very much; so, the girl decides to go with the boy with the hope of paying the dowry once they get means.

Nyota was attending Karhanda Primary School when they met. They married in this way and she followed him everywhere he was sent for service. They traveled to different areas in the DRC.

A Stolen Duck and a 'Curse'

Accordingly, during their stay in Burega, Nyota’s husband confiscated an old woman’s duck and he took it home for dinner.

This duck was the only revenue resource she had.

She felt anger toward him, but with DRC soldiers, nothing is easy.

In the DRC, there are beliefs in sorcery. Most cultures of the DRC believe in this.

According to Nyota, the old woman decided to 'bewitch' him; Nyota's husband became seriously sick for a long period of time.

He was taken everywhere for medical care; however, he did not recover.

Nyota and her friends decided to go and see the “witch” to beg her clemency and forgiveness, believing her to be the only one who had the power to cure his illness. But the the old woman refused their entreaties and responded,

“As he wanted to make me die of hunger by taking my only duck I had, he has to understand that soldiers must be polite and respect women”.

After suffering for a month and four days, Nyota's husband died. (Perhaps by coincidence or perhaps because the power of belief can be very strong - Editor's note).

No dowry had even been paid to the wife’s family. Her husband, being a soldier, had no property where they were. Nyoto was left with their two boys, age 11 and 8.

Because she had no means to support them, she took them to her parents in the village.

Her husband's death became a calvary for Nyota: she was to face more suffering ahead.

She brought his corpse to the Bukavu military campsite, where her husband’s friends stayed.

Then a period of mourning began.

In most DRC cultures, it is commonly believed that - when a husband dies - it is the fault of the wife. Nyota's husband was not from the same area as Nyota. Equateur is another province of the DRC. The culture is different.

The soldier's friends and famiies organised the period of mourning and, in accordance with their culture, Nyota was subjected to a lot of torture as a 'punishment'.

This belief caused Nyota to suffer a lot, as she went through many hardships.

The Price of Mourning

Nyota was obliged to sit on a mat throughout the mourning period.

The first act she endured was that her head was completely shaved as the first indication that her husband had died.

She had to pay money so that she could be shaved.

The majority of DRC cultures do this. They shave the widow carelessly, and sometimes blood sheds.

It is believed that the shaving will prevent the husband's spirit from haunting the wife. This is also a symbolic act to indicate that the wife is now a widow.

Throughout the mourning period, which lasted a whole week, Nyota was deprived of food; she was only given a little cold water mixed with sugar to drink.

If her parents wanted to visit her, they had to pay, in order to talk to her.

She told me that even her brother could not speak to her without paying some money (five US$). They were then given a short time-span of a few minutes, which they were not allowed to exceed.

When one of Nyoto's sisters came to see her, and she started immediately to speak to her; Nyota had water poured [on her] as a punishment.

Even going to the toilets, someone had to accompany her so that she could not look behind and could not speak to anyone; this continued until the mourning ended.

Another mourning practice required  that someone had to anoint her with pepper in her private parts, but she begged them not  to –  and asked for forgiveness.

They told her again to pay some money so that she wouldn't have to undergo this, and she paid. They added that she was forgiven simply because her husband died in her arms while they were heading to Bukavu, the capital city of South Kivu, for medical care.

Nyota was Left With Nothing

All the husband’s property and clothes were confiscated by his fellow soldiers, as the husband had no blood brothers there.

These soldiers told Nyota that they would send his belongings to his family. But logically, these should have been given to his children.

All this is due to cultural beliefs.

In a situation where it is the wife who dies, the same applies to the husband.

This is the culture of Nyota husband’s area. The children had nothing to inherit from their father because DRC soldiers have no property as they live like nomads, from place to place.

Nyota told us that in her village, there are many women and girls who are destitute.

This state of affairs causes girls to become involved in untimely sexual activities for survival, which causes HIV/AIDS to spread.

Other girls get married too soon, or by force, as the parents think the husband will give them enough dowry so that they can a start business with it –  and so support other children. Or, if the man who was chosen to marry the girl is rich enough, he can help the wife’s family.

That is the way of doing things in this area.

She also revealed to us that a majority of women in this area are widows because their husbands were killed during the wars.

These women now are suffering a lot, and some were again raped by militants.

This situation makes the women be seen as outcasts. Their husbands repudiate them because families believe a raped woman brings shame to the family and a kind of malediction, or simply, she is a prostitute, to their minds.

Children born to such women have no father; they will be educated by the mother who has no means, except her body for sale (prostitution).

Some of the girls and women in this area live on traditional forms of agriculture. They often work in groups on a neighbour’s land, and they are paid a little money – which they use to survive.

Based on the above, Nyota is strongly convinced that her integration into COFAPRI will help her to mobilise all her women and girl friends to join also.

She said she heard someone speaking of our project, but she was wondering how to meet us. Now that she has met us, we have discussed different issues –  and she accepted to represent us in her village, that is Kavumu, near the Bukavu main airport.

She says women and girls will join in massive numbers, as we have an objective.

We explained her what we are doing, and she said that the project of pig and rabbit rearing will help them in many aspects.

We also discussed the issue of birth control.

Nyota openly said that having one or two children is 'like being barren.'

She added that due to this, even her sisters call her unproductive –  because she is the only one who has such a reduced number of children among her sisters.

Any woman who does not produce a minimum of five children is considered as barren in most DRC cultures. And those who produce fewer, are often victims of abuse –  and the husband often marries a second wife in search of more children.

They say the more children one has, the more one is respected and powerful.

Others say that you have to produce as many as possible, because you don’t know how many will live and those who will die; this is an indication of a lack of medical awareness.

A New Leader for her Village

Nyota promised to meet us again in a short period of time, and at that time, we will discuss other issues and the different ways to promote COFAPRI in her area.

She promised us that she was going to make the people ready – and build the place where they will rear their pigs and rabbits.

She suggested if we could help them with setting up a sewing centre in their village so that they can learn how to sew, it can help them earn some money.

We agreed to start with animal rearing, and then later on, get involved in sewing activities.

The courage and motivation Nyota has by being our representative in her village remains a good indication that she will work for the welfare of women and girls of her village.

Bahati believes that meeting women at their home is a better way to show them COFAPRI is close to them, and that it wants to understand better their woes.