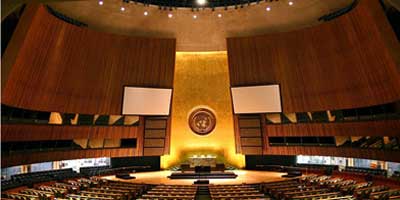 Monday 22 September 2014, world leaders gathered for the United Nations General Assembly Special Session (UNGASS) to discuss the progress and achievements of the goals set out in the landmark International Conference on Population and Development (ICPD) twenty years ago.

At the UNGA 69th, Member States Promise the World Again

On 22nd September 2014, at the UN headquarters in New York, along with world leaders, I joined colleagues from the community service organisations (CSOs) and public/private sectors, at the 69th United Nations General Assembly (UNGASS) to the follow-up of The 1994 International Conference on Population and Development (ICPD) PoA (Programme of Action), listened to member states renewing their promise – to invest in girls' education, promote their sexual and reproductive health rights (SRHR) services and need, as well commitng to the further implementation of the ICPD PoA review, including the findings of the Secretary General & regional ICPD review outcomes into the Post-2015 framework.

This is not the first time we have listened to governments make promises.

Twenty years ago, 179 member states assembled in Cairo and in a consensus they committed to promote gender equality and women's empowerment, as well as protecting and promoting women’s reproductive health and rights.

SO...what happened to the promise?

Research shows that in some regions, substantial progress has been achieved in terms of reducing maternal mortality, teen pregnancy and providing universal access to antenatal care.

With these, one might be tempted to rejoice that all is going well. But far from it – much work is still to be done.

“Our work is not finished until every human can fully enjoy their sexuality, and sexual rights”.

VAWg (violence against women and girls) remains one of the leading and greatest hindrances to achieving human rights. Over the years, research has shown that globally, at least 1 in 3 women have suffered from violence in their lifetimes (W.H.O Report) and in Africa – Cameroon included, around 45% of women have experienced at least one form of violence (The Guardian).

Annually, 14.2 million girls, or approximately 39,000 girls are married off every single day; young people continue to lack access to comprehensive sexuality education to enable them make informed choices and healthy decisions about their lives.

With all these facts impeding our well-being, for sure there is nothing to rejoice about.

Like one speaker at the UNGA said, development can't be achieved without addressing existing multi-forms of inequalities and discrimination within and across regions. In other words, global development can’t occur when VAWg, sex and gender based discrimination remains prevalent. Same, too, will Africa not achieve the dividend if measures aren't taken to address VAWg, youth unemployment and gender equality.

Africa has made least progress towards MDGs

It is worth noting that Africa remains the one continent with least progress towards attainment of the Millennium Development Goals. Yet, many African leaders made progressive statements, demonstrating their zeal to how they shall commit and promote the achievement of the Post-2015 goals.

Excerpts from Country's Statements at the 69th UNGASS

Uganda & Burundi: “We share the views of the Secretary General that in order to eradicate [extreme] poverty and achieve equality, it is important to advance social inclusion and higher level of education”.

Ghana: “Young people are great entrepreneurs and managers. Open data in the hands of young people can effectively drive accountability and transparency / development of a country”.

Togo: “We endorse the position of the African Union to the SDGs [Sustainable Development Goals] and urge for step-up efforts and strengthen synergies to achieve the realisation of ICPD PoA”.

Swaziland: “We reaffirm the full commitment of Swazi government to the ICPD PoA and will work tirelessly to ensure that the gaps are addressed”.

It was interesting and somewhat encouraging to watch how member states acknowledged in their statements the fact that gender equality and social justice remains a key component to development.

And how ensuring equality for all is ensuring respect for the rule of law, enjoyment of basic human rights, as well as advancing social inclusion and also providing quality health care and education for all.

I hope their promises will actually translate into meaningful actions and not just end as mere words.