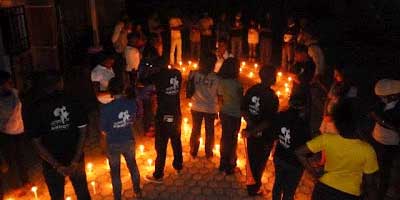 The light that heals – and made those present glow from within.

The International AIDS Candlelight Memorial is one of the world’s oldest and largest grassroots mobilization campaigns for HIV awareness in the world.

Started in 1983, the Candlelight Memorial takes place every year on the third Sunday in May and is led by community, health and faith organizations from over 115 countries.

With 33 million people living with HIV today, the Candlelight serves as an important intervention for global solidarity, reducing stigma and discrimination and giving hope to new generations.

And this year, it is estimated that closed to 100,000 people in 115 countries joined the celebration of the International AIDS Candlelight Memorial under the theme, "Promoting Health and Dignity Together."

Like many of the people present at the memorial on Wednesday Night Lights, it was my first time to witness such a ceremony, where I not only witnessed but was an active participant in the coordination.

Yonga Nelly-Shella from RUWDEC NGO at the stage--advocating and educating the student public on HIVAfter close to eight hours of health / HIV peer-to-peer educational talk and distribution of materials likes condoms, flyers to the tens and thousands of students, youth present for the national university games at the University of Buea (UB), it was time to light the candles to remember those who have lost their lives to HIV/AIDS pandemic. Not forgetting the thousands affected by its impact. 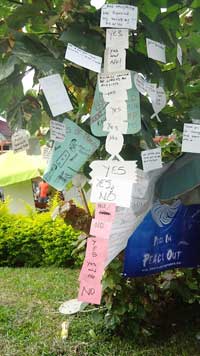 Tree-chart billboardUnlike the usual community-based advocacy settings, Women For A Change Cameroon (WFAC), during the peer-to-peer education, used the opportunity to demonstrate to the thousands of people how a grassroots organization can always improvise new and environmentally friendly strategies just to reach out to the community.

For example, WFAC stand was under a shrub tree — which served as both the flipchart, canopy, and at the same time – a sticker-board where tributes and personal statements were pasted for all to read.   The shrub tree was also the billboard, exhibition stand – where banners and other readable content were pasted and displayed.

Just as it was night fall, and the candles lit; I noticed everything by me looked different, most especially the candles on orange flame.

The sky was covered with darkness. The night was cold, wind-less though noisy but the mind was silent, letting the flame glow within.

Aren’t humans candles? A question I pondered to myself.

There comes a time when we burn and glow iin all our surroundings. And then somehow, we quietly fade out. May and may not leave smoke or a wax trace. 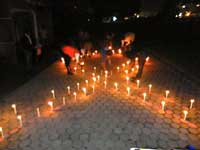 Sometimes, too, we fall before we can even glow.  And if there is no support at the moment to hold us standing, we might never be able to stand again—

At that moment– watching the candles gently burn, I pondered in thoughts and at the same time, listened to the choral song sung by participants, it felt like, all alone, I hadn't understood the theme for this year until that Wednesday's Night Lights, when participants all held hands together.

“This is such an emotional moment for me”, said Ms Yvonne, President of JCI-UB (Junior Chambers International).

Bernard S. Bonet Project manager – in an informal conversation, said: "We have touched lives, many lives."

For the first time, I guessed – an initiative like this one has brought students from over 30 different academic institutions together, youth from diverse backgrounds, to collectively take a moment to remember all those they have lost to the HIV / AIDS pandemic.

This is a day not to forget – the memories of Wednesday Night Lights is to forever be remembered as having instilled a new kind of brightness in the hearts of many.